News
Business
Movies
Sports
Cricket
Get Ahead
Money Tips
Shopping
Sign in  |  Create a Rediffmail account
Rediff.com  » Business » A year of living and working in the shadow of Covid-19 pandemic

There is no one way to describe the 12 months that have gone by since India reported its first Covid-positive case on January 30, 2020. 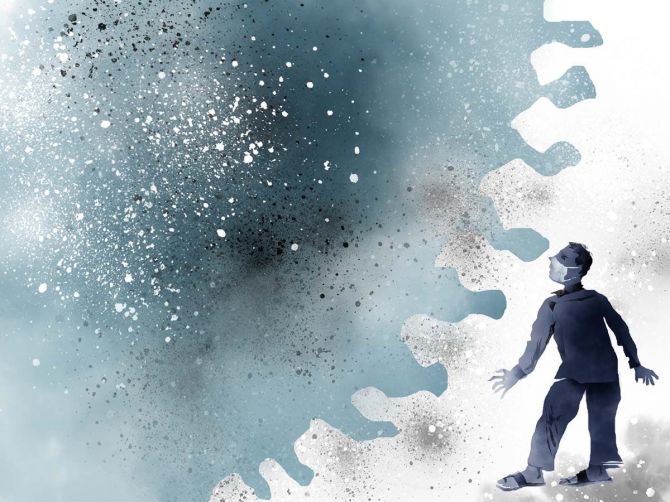 A year of adapting to new ways, while longing for the old.

There is no one way to describe the 12 months that have gone by since India reported its first Covid-positive case on January 30, 2020.

Like for many, home and office, the two pillars that define our lives, became one for Dabur India chairman Amit Burman, who has been in London with his family during this period.

Had it been an ordinary year, he would have been going to his office in Delhi, while his son attended college in the UK and his daughter studied in the US.

With the family together for months, Burman says he has got to closely know about his children’s college lives and experiences, and spent time playing badminton and board games with them — something he might not have ordinarily got a chance to do.

Alongside overseeing operations at Dabur, from his remote location, he has organised the third season of Poker Sports League, one of the largest such events, which is currently on.

For many businesses, the need to have people coming into office has shrunk.

For many others, however, it remains integral to their operations.

“Ours is an essential services sector, so we have been working in the OIL (Oil India Ltd) fields even during the pandemic to cater to the needs of fellow Indians,” says Krishan G Insan, who works as a senior manager with a large central public sector undertaking and is currently stationed in Assam.

For professionals like him, the routine is now more challenging and the responsibilities are higher —to get the job done, while also ensuring Covid safety protocols.

“We are going to the office every day as per the previous routine and observing all protocols when it comes to gatherings.

Most of the meetings are virtual until it is essential to meet in person."

Office life now is a combination of online and offline.

“As a result, we have longer working hours with several events being hosted online.” Insan is not complaining.

Like many others, he has taken it in his stride and acquired new skill relating to his profession, and in personal life as well.

“The vaccine is very much awaited,” he says.

“Then we can go back to what was the normal routine.”

The pandemic was a call for action also for the healthcare and pharmaceutical industry, which found itself in the thick of things when Covid burst upon the scene.

“Remote working for our entire staff was not an option,” says Deepak Sapra, CEO (API and Pharmaceutical Services) at Dr Reddy’s Labs in Hyderabad.

The challenge was to make a large category of people to come to work and operate safely and confidently.

“Shift timings were increased from eight hours to 12 and people came in rotation to work four days a week. This ensured minimal handovers and reduced exposure,” Sapra says.

Arrangements were also made to get people to stay within or near the premises.

The seating in the staff buses was spaced out and organised in a zig-zag manner.

Those who could, such as corporate and project management staff, were quickly oriented to work from home.

“It was an intense time,” recalls Sapra.

Things have now gotten into a rhythm and are close to how they were in normal times, but some of these practices are continuing.

Apart from logistical concerns and adaptations, this period also called for mental reorientation.

Kumar Aditya, who works with a fintech firm in Gurugram, says the dynamics of business are changing.

Things that would've happened, say, five years down have got expedited. Aditya’s is a products-cum-services company.

It is now reorienting to a product-focused company since the cost of providing services is far more.

“Naturally there is nervousness among employees who were hired for one thing and are now doing a job that someone with less experience can do for less salary,” he says.

The uncertainty has brought with it a vital lesson: "Your job may not be secure, but ensure that your career is."

So, he has been updating his skills, the intangible ones such as reading more, being more aware of things around him, and focusing on sound investment planning.

He has also realised the importance of deep work, without disturbance, which is sometimes unavoidable when working from home.

In the initial months, with bosses suspicious of whether people were actually working while at home, Aditya says there’d be a catch-up or stock-taking call every three hours.

“A lot of time was wasted in that, but now everyone is more or less settled in the work from home (WFH) routine,” he says.

Anjali Varma, a Bengaluru-based independent HR consultant, is hopeful that this shift in mindset will bring about a larger change.

“There has been a fundamental shift in the way domestic chores are divided between genders, and the lockdown normalised these conversations across the board and helped challenge the associated stereotypes.”

This, she hopes, will positively impact managers and help them become more empathetic.

“Previously, WFH was not looked upon favourably,” says Varma. That has changed.

Most MNC in Gurugram don’t intend to get people back into office before June.

Across the country, the offices that are getting employees back are doing so through shifts while also ensuring social distancing norms are maintained.

A hybrid model is the other new normal.

Aditya, who lives in Delhi, would be happy to continue with WFH – “though I do sometimes feel I have intruded on my mother’s space who used to have the house to herself during the day”.

But he is happy about the travel time he saves.

“My routine is better. I’ve been able to pay attention to myself and be disciplined.”

As for engaging with colleagues and good, old office banter, “that continues with the colleagues I am close with,” he says. 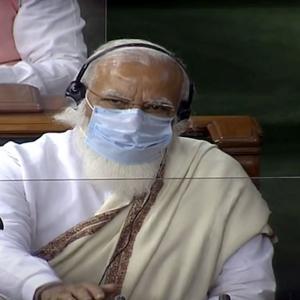