News
Business
Movies
Sports
Cricket
Get Ahead
Money Tips
Shopping
Sign in  |  Create a Rediffmail account
Rediff.com  » Business » 'There is a need for more supervisors at the RBI' 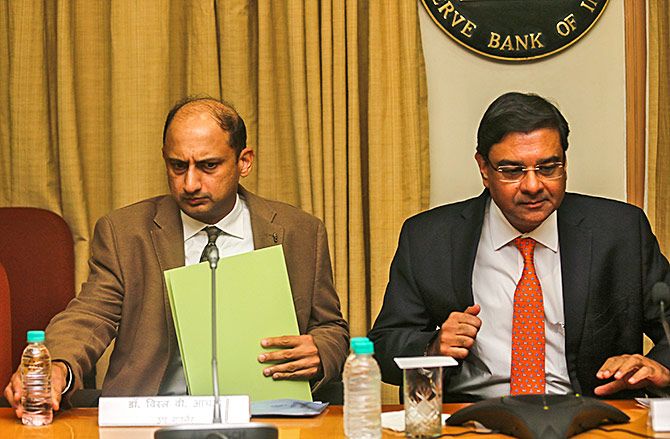 "My diagnosis has been that massive failures happened because of the supply push on credit, which the government wanted, explicitly or indirectly, through public sector banks," Dr Acharya tells Tamal Bandyopadhyay in the concluding segment of a two-part interview.

Talking about State-owned banks ... India has gone for consolidation, reducing the number of these banks from 21 to 12. And there has been talk of privatisation. What is your take on this?

Consolidation is not enough.

The only reason why I have not been against consolidation is because there have been so many times when positions of managing directors and board members have been empty for long ... we need to inject capital into these banks.

It will have to come from the government, but the headroom for that is limited.

So, we have to divest government stakes in these banks.

I think that some re-privatisation should be on the table.

I also think we could potentially open up Indian banking more to foreign banks, which will bring in expertise in underwriting, fintech and risk management practices.

We have a repressive financial system and we need banks with deep pockets. Is it time to allow large 'fit and proper' corporations to float banks?

I would say no.

From our experience with IBC (Insolvency and Bankruptcy Code) I know that entities are very powerful and they have the capacity to alter the rules of the game.

If you let them into banking, you magnify the conflict of interest -- the root cause of our banking issues -- many fold.

Those who are reluctant to let them in have exactly the right concerns.

I also think we could potentially open up the Indian banking more to the foreign banks.

Right now, we have opened up, but we want them to meet the kind of rules and restrictions that we impose on domestic banks. We can't apply that criterion because they have to bring in capital from outside.

The question they are going to ask themselves is: Can we generate return on assets in India like we do in some other parts of the world?

If we want some foreign capital to come in, we have to think carefully through how do we make banking in India attractive to foreign banks.

Foreign banks will always bring in a lot of expertise in underwriting, fintech and risk management practices...I think that should also be on the table.

You see a problem in RBI being the debt manager of the government. But historically, the Indian central bank is very possessive about this function -- it resisted any move to snatch it away.

I have very mixed feelings of this.

What happens is that when RBI is the debt manager, it cannot remove its focus from the prices of the government bonds... It can also influence the participations in the auctions, sometimes calling up the banks to pick up (the bond).

It also starts getting into the liquidity management framework and indirectly therefore into the functions which relate to monetary policy.

It is very hard for the senior management to maintain a Chinese wall and separate the roles of just being placement agency or auctioneer of the debt from someone who can also influence the prices of these bonds.

The RBI is a full-service central bank. The regulation of housing finance companies has been taken over by the RBI. It is also the sole regulator for cooperative banks. Does it have the bandwidth to play so many roles?

After the global financial crisis, the emerging view on this has been that it's better for a central bank to be a full service bank and reinvent itself to perform these functions.

Take the example of the UK where the supervision of the authority was separated and then there was not much coordination between the central bank as the lender of the last resort and the supervision authority.

A lot of the seeds of the global financial crisis in the United States was the highly fragmented regulatory structure over different financial institutions that were in place.

Having said this, there is definitely a need for more supervisors at the RBI.

There is also a need for greater specialisation in supervisory skills.

You have said even the best-rated corporations do not service bank loans on time.
On what basis you are saying this? The bankers don't say this. Does the CRLIC data reveal that?
Shouldn't the RBI share the data at least with the rating agencies?

My understanding is that there are some restrictions on supervisory data being shared outside of the institution.

It violates certain parts of the RBI Act... A single-day default needs to be reported by the securities regulator at least for all publicly listed companies.

This is now required on bonds and marketable debts.

Single-day default disclosure is still not required on bank loans.

A public credit registry would solve the problem rather than being shared with rating agencies if there are legal hurdles.

We could have a public credit registry where this information is gathered and that could be shared with the banks.

Non-banking financial companies (are playing a critical role in meeting consumer demand. What should be done for their healthy growth?

Stress tests and asset quality reviews are necessary ... The sooner you do it, the better it is.

We have given them enough time.

The NBFC sector has been stabilised directly or indirectly through liquidity injections and lending by banks.

I would not be averse to some NBFCs taking the IBC road ... They are not banks; they are not being asked to meet certain requirements.

There is a feeling that the RBI is a weak supervisor. To cover up its weaknesses, it focuses on stricter regulations and the economy suffers ... Your comments?

That's certainly one of the views ... My diagnosis has been that massive failures happened because of the supply push on credit, which the government wanted, explicitly or indirectly, through public sector banks.

Every regulator gets some supervisory functions wrong at some points of time ... (As a central banker) I would introspect, try to reinvent the quality of supervision, and make it as principle-based as possible.

Finally, and this is a very rude question, some feel 'imported' central bankers such as Rajan and you do not have enough skin in the game. You come on a lien and go back to academia. You see the world of Indian banking through a different prism ...

Do we have enough skin in the game? Do we know the system enough?

We are not the only ones in the RBI; there are a lot of other people.

The value we bring in is precisely because we are not necessarily building long-term careers here ...

It's not that we don't study India, it's not like we don't have India within us.

Lastly I would say that we bring skill sets from having observed how things work in different parts of the world, which is valuable for India.

It's irrelevant where you reside. The question is: Are you the right person for the job? 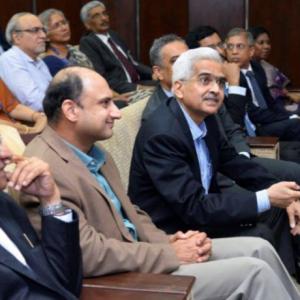