'What we are going to see is a large number of white collar jobs getting lost.'
'Job loss can drive people to depression, drugs, alcoholism and even suicide as there is no one to turn to when they are down.'
'There is no in-between now -- things go from a luxurious lifestyle to no lifestyle.'

According to a CIEL HR Services survey -- conducted among mid-to-senior-level professionals in 50 information technology companies -- nearly 2 lakh jobs are expected to be slashed in the sector in the next two years.

Most of the layoffs will take place in segments like IT infrastructure support, testing and software development.

Aditya Narayan Mishra, below, left, the chief executive officer of CIEL HR, tells Rediff.com's Shobha Warrier a disruption of this kind and scale in white-collar jobs has not happened in the past and explains why he finds the social impact of it more worrisome. 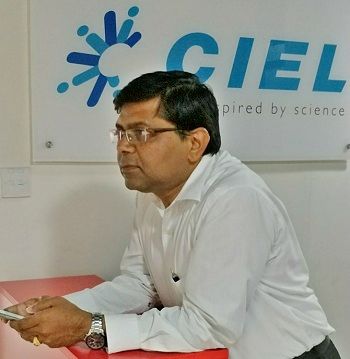 Other than the jobless growth the country is witnessing, your survey finds that 2 lakh jobs will be lost in the IT sector in the next two years. How worrying is the survey result?

It is very worrisome that so many jobs are going to be lost at one go. A disruption of this kind and scale has not happened in the past.

What we are going to see is a large number of white collar jobs getting lost.

So, people have to re-skill themselves and prepare for the eventuality.

What kind of impact will such an eventuality have?

I see the social impact, which nobody has talked about so far, as more worrisome.

In urban India, there are more nuclear families today than in the past.

As families are becoming more insular than before, when there is a shock in the family like losing a job, you are left to fend for yourself.

20, 30 years ago, if there was a problem with one member in the family, there would be a brother or a sister or a cousin to share the burden. Not so today.

Those who lose jobs today find it hard to take it both emotionally and financially.

Job loss can drive people to depression, drugs, alcoholism and even suicide as there is no one to turn to when they are down.

People may take extreme positions in times like these.

There is no in-between now -- things go from a luxurious lifestyle to no lifestyle.

That's why they take extreme steps in life, too.

Job losses are worrying in our context, mainly because of the social impact it will have in our country.

In which segment of society will these job losses happen?

Re-skilling is easier among those who are in their 20s and early 30s. They are the people with 2 to 10 years of experience.

Those in their late 30s and early 40s are mainly in the managerial positions and have stopped doing technology-related jobs.

The job losses in this segment are only because the pyramid is shrinking.

Since they are with 10 to 20 years of experience, it is difficult to re-skill them.

The option available to them is to move to the managerial positions in the non-IT industry.

I would say employees must take the initiative to re-skill themselves.

However, large organisations with necessary bandwidth are re-skilling their employees, but small organisations do not have the wherewithal.

Do you think job losses are happening due to automation and new technologies like Artificial Intelligence, Cloud computing, etc?

Jobs using simple technology are going away due to automation.

But those who are at the bottom of the pyramid, those with 2 to 10 years of experience, are ready to learn the new technologies.

AI, data sciences, 3D modelling, virtual reality, augmented reality, cloud architecture are some of the areas where re-skilling is needed.

If you are an organisation with 10,000 people working for you with revenues of Rs 1,000 crore, you will require only 8,000 people with new technology, for the same revenue.

That's how 2,000 people become redundant, and we count them as job losses.

Job losses are mainly happening because of deployment of automation.

Also, some countries are not encouraging people from other countries to come and work there.

Is this policy of employing local people also because of job losses there due to automation?

Yes, job loss is a contributing factor. But the main factor is political.

For example, in the United States, they find that local people are denied jobs because people from India and China are working for lesser salaries.

Some people say it will help India eventually because these jobs will be outsourced to India, and instead of people going there on H-1B visas, the work will be done here. Do you think so?

Maybe in the long term, it can happen because once these new technologies come into force, onsite support will not be needed much.

When you can remotely do the work, you don't need H-1B visas.

But in my view, it is not going to be a reality soon.

Does your survey find a loss of 2 lakh jobs only in the IT industry?

Yes, in the IT industry and outsourcing industries like KTO, LPO, etc.

According to Nasscom data, 23 lakh people work in IT and IT-related industries.

Though we are talking about only 10 per cent job loss, it is a huge number.

It must be worrying for Prime Minister Narendra Modi who has promised 10 million jobs a year...

It must be worrying, but if you look at the narrative of the government, you see positive signals.

The government is trying to create alternate forms of employment.

For example, they are pushing entrepreneurship in a big way.

The government has realised that job creation is a complex process, so they are looking at alternate methods.

I feel they should push flexibility at work too.

Today, only blue-collar jobs are paid on an hourly and daily basis, but they should look at having the same option for white collar jobs too.

You need the same kind of flexibility a plumber or electrician has for a company secretary or a doctor or a teacher.

There is no flexibility for white collar jobs in India right now.

Some people call it Uberisation of India...

Absolutely; I think this is what is going to happen in India.

There are many new initiatives in India too, like we have developed a platform called iBridge.

On this platform, companies that have surplus manpower available for a certain period of time can lend these people to companies that are looking for people on a short-term basis.

How do you see the job scenario developing in India in the next couple of years?

The IT sector has been a big employer of the white-collar work force, and it will continue to be a major driver.

I also think that GDP growth will go up and the development in core sectors like infrastructure, power, solar and wind power, etc will take place.

The positive thing I see is that revenue per employee is going to increase because of the new technology and automation.

The number of employees in each organisation compared to their revenue may not grow actually. This is a global phenomenon.

Does that mean even if the economy grows, it will be jobless growth?

Yes, it will be a jobless growth unless the government encourages flexibility in a major way.

This will be good for the economy, people and income distribution.

When Modi faces the people in 2 years' time, how many jobs will be created across sectors, according to you?

From the government report itself, so far, they have been able to create only a few lakh jobs.

Many people will get part-time jobs in this scenario.

So, on the record, the picture will look better, and they will be able to say that they have created a few crore jobs.

Is creating jobs for records enough?

What is more important is we have to look at this from the social perspective.

What matters is the income level of the people, their standard of living and human development index, and not just statistics of how many jobs are getting created.

If you ask me, if that is enough, it is definitely not enough.

But this will be taking a few steps in the right direction.

Is there reason to panic about job losses?

It is definitely a worrisome situation which cannot be avoided.

Individuals may suffer because of job losses, but from the perspective of the economy, there is no reason to panic.

Are the signals positive or negative?

I see only positive signals because the economy is growing and more and more people are getting jobs.

Today 5 to 6 crore people work in the organised sector, and it may become 6 to 7 crores in the next couple of years.

Many people get dignified employment and these people also will get benefits like insurance cover because of the schemes started by the government.

There are no short cuts in job creation, and this is the path we have to take.

If you want to climb Mount Everest, you have to start from the base camp, and from there you climb to the next stop, and it goes like that.

Reaching half of Mount Everest in two years is a very ambitious task.

They will definitely climb up and move forward.

That is why I said, the government is moving in the right direction.

But promoting flexibility in jobs is important.

So also is having a one country, one labour law like the GST.

Labour is governed by the central and state governments today.

A one nation, one labour law will make migration and compliance easy, and lend a lot more flexibility to employing.