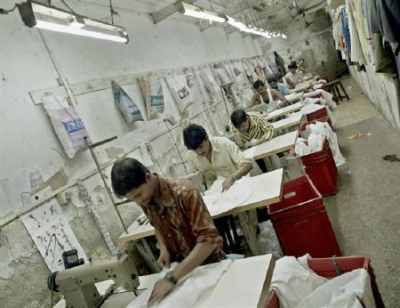 'Nobody expected the slowdown to go for these many days.'
'Unfortunately, it is an unbelievably bad slow down.'

V Sundaram, the president of the Coimbatore Small Scale Industries Association, along with Vanitha Mohan of the Indian Chamber of Commerce and Industry and K K Rajan of the Southern Indian Engineering Manufacturers Association, representing 52 associations from Coimbatore district, met several central ministers and prevailed upon them the difficulties the Small and Medium Enterprises sector has been facing because of demonetisation.

You and other representatives met several central ministers. Why did you go to Delhi?

Because of demonetisation, we are facing a lot of problems which we wanted the ministers to know.

There is no money in the banks for us to withdraw.

Moreover, we are not able to get even that amount. ATMs are not working.

Officials from various government departments are asking us to open bank accounts for all our employees.

Though our employees have bank accounts, they do not want us to transfer money into their accounts. They want cash.

They do not want to stand in queues in banks for their wages.

It is another matter that banks do not have enough money to give everyone.

These are some of the problems we face ever since demonetisation happened which we wanted the government to understand.

That's why we decided to meet them in person and appraise them of the situation.

What was the government's response?

They were patient and positive.

In fact, we went there without an appointment. We just went to Delhi and met the ministers of state for finance, information technology and labour.

How do they plan to solve the problems you face?

They assured us that they were working to solve these problems.

They call us every day to get updates on the ground realities.

We hope the problems will be sorted out in the next one or two weeks.

How much has the SME sector, a sector that contributes 8% of the country's GDP and employs 8 million people, been affected because of demonetisation?

I can only say we are badly affected.

In November, we could manage with the old currency.

This month, we do not have that luxury also.

30% to 35% of our work force is migrant labour and they want only cash.

If we don't give them cash, it becomes extremely difficult for them to manage their day to day activities.

Most of them have gone back home and we are suffering from shortage of labour.

Naturally, business has gone down.

How much has it gone down in the last couple of months?

A sample survey found that we are down by 50%.

In Coimbatore, there are many pump manufacturers and they are badly affected.

As they deal with farmers, the transaction is always done in cash.

Because of the cash crunch, dealers don't come to buy the pumps as farmers pay only cash and they don't have cash now.

You must understand that we the small scale industries in Coimbatore welcome demonetisation; we are not against it at all.

We would never say that. But we are facing a lot of problems currently because of demonetisation.

Do you believe that demonetisation will flush out black money?

To some extent, it will flush out black money.

When the GST (Goods and Services Tax falls into place, black money will slowly go out of the system.

More than black money, what we are bothered about is rampant corruption.

Wherever we go, we suffer because of corruption.

Black money is the government's problem and corruption is the entrepreneur's problem.

Yes, both of us have problems and if the country has to move forward, both these problems have to be solved.

Are we ready for a cashless economy, particularly the SME sector?

90% of all the workers in Coimbatore earn Rs 500 a day and all of them have LPG cylinders at home.

All those who have an LPG cylinder have a bank account.

So, I would say we are ready for a cashless economy.

When there is no money in the ATMs, how are they going to get money?

Only the migrant labourers who constitute 30% to 35% do not have bank accounts.

It is also said this move will increase NPAs (non-performing assets) in the sector?

Normally if a company doesn't perform, it is declared as NPA in 90 days.

In our memorandum to the government, we have also asked for an increase in the time period. They have promised us to consider our request.

We have also asked for a waiver in the interest and moratorium on term loan until this problem is settled.

What are the major challenges the SME sector faces now?

The major challenge is availability of money.

When we had the weekly pay day, and monthly pay day, many companies had to put money into the accounts of even our relatives so that all of them could withdraw Rs 24,000 and give it to the company and we could pay the employees.

This is not the way to run a business.

If we don't pay employees in cash, they will quit and go back to their villages.

It is important for us retain employees whom we have trained.

Do you expect the economy and the sector to revive by the end of December like the prime minister has promised?

Rs 15 lakh crore have returned into various banks and all the banks are full of cash now.

50% of this was unused money or money that was not in circulation.

It is time the government bring down the interest percentage, from 12% to even 5% or 6%.

The effect will be that the cost of manufacturing will come down. This will be a big boost to the economy.

As there is uncertainty over GST, I cannot commit myself about a particular time frame for the revival.

The question is whether the GST Bill will come into existence in April 2017. We are not sure about this.

I would say, black money, corruption, GST; all are inter-related.

The prime minister asked all of us for 50 days. We have waited so far. Let us wait for a few more days.

We hope and tell ourselves that once money comes into the banks, everything will be fine.

Do you feel people are getting impatient now?

Everybody is impatient and frustrated now.

All of us are patiently waiting only because everybody understands that it is for a good cause.

But nobody expected the slowdown to go for these many days.

Unfortunately, it is an unbelievably bad slow down.