There is no ignoring the fact that world equity markets at this point are in unsustainable parabolic trajectories. The question is when, not if, a deep and sharp correction arrives. Investors need to be prepared for a quick exit if they are riding the rallies at this late stage, says Sonali Ranade

The mighty dollar [DXY] made a convincing new high above 84.25 and then went into a short-term consolidation just above 83. The euro and yen rallied against the dollar in counter-trend rallies that may be brief.

The big news was in commodities where the CRB CCI Index of 16 commodities broke through an important floor at 540, opening the way to 500 and possibly 440. Crude, an important holdout against the collapsing commodity prices, may have completed its counter-trend rally at $97.50 and joined the general commodity correction. If so, falling commodity prices would aid recovery in most economies and may support equity prices for another leg up.

There is no ignoring the fact that world equity markets at this point are in unsustainable parabolic trajectories. The question is when, not if, a deep and sharp correction arrives. Investors need to be prepared for a quick exit if they are riding the rallies at this late stage.

Going by my wave counts, and in terms of time for those counts, mid-August appears to be a likely candidate for the onset of a sharp correction in equity markets. Commodity markets too indicate that they might bottom out mid-August.

Could we be headed for a simultaneous bottom in risk assets some time end-August? Such an outcome would be a good test of the robustness of the new financial order that the central banks have created.

The NSE Nifty  failed to hold the breakout point from the topside and could slide down to the 5800 region before taking another stab at 6300. However, a correction from there, synchronised with world equity markets, is possible and probable.

The correction could be vicious. Hold tight stop losses just under 5800.

A lot of things, including confirmation of a turning point in the interest rate cycle on USTs, are converging to mid-August. Investors should lighten up in rallies. Bears should wait for confirmation that markets have turned. Else they will only fuel this rally as before. 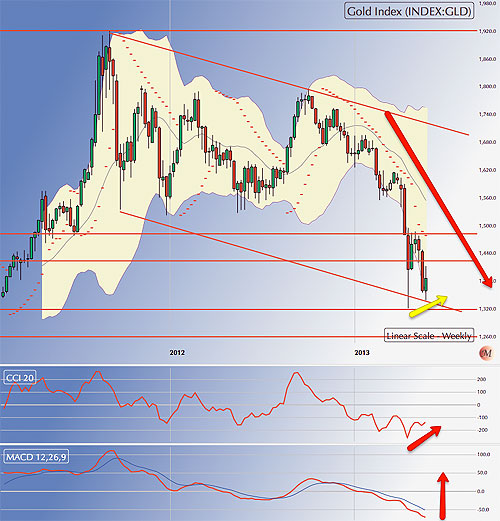 Gold: The yellow metal made a low $1336.30 during the week, which was a wee bit higher than the previous low of $1321.50 made on April 16 and closed the week at $1386.60. My sense is that the floor at $1320 will nowhold for a few months while gold prices trace out a complex counter-trend correction between the low of $1320 and the overhead resistance at $1550.  From current levels, the first leg of the counter-trend correction could see gold rally to $1500 before resuming the downtrend. Gold continues to be bearish for the long-term. 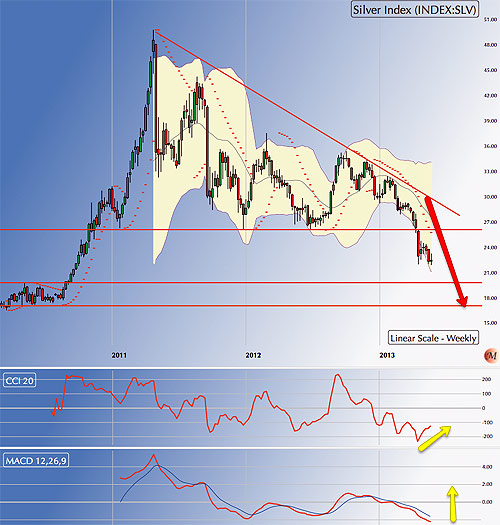 Silver: As mentioned last month, my wave counts indicate the immediate bottom in silver is not yet in place. Silver made a new low of $20.25 [not shown in this chart] on May 20 before closing the week at $22.496. The new low is close enough to the often-stated floor of $20 but I maintain this floor will not hold for silver. Charts suggest that silver should bottom close to $14 towards the middle of August. Note the mid-August date. Many charts are converging to that date across markets and asset classes. 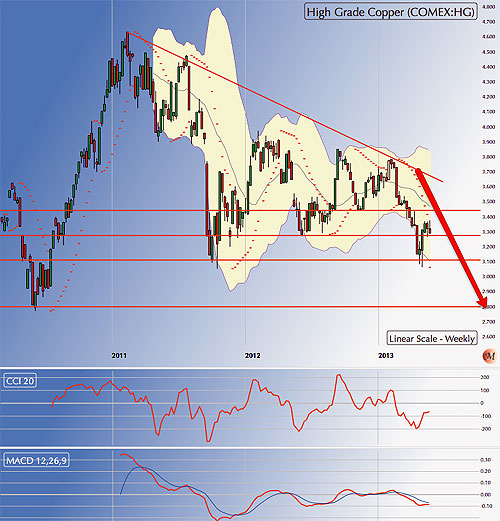 HG Copper: This closed the week $3.2955 after making a double top at 3.418 during the week. While copper can rally to $3.55 in a counter-trend rally, the more likely course is a drift down to 3.00 for are test of the low on May 1. There is good chance that the floor of 3.00 may not hold and we could see copper plunge much lower in a synchronised correction towards the middle of August. One can’t be bullish on the metal unless the floor of 3.0 is convincingly retested. Hence the metal is likely to drift lower than upwards. 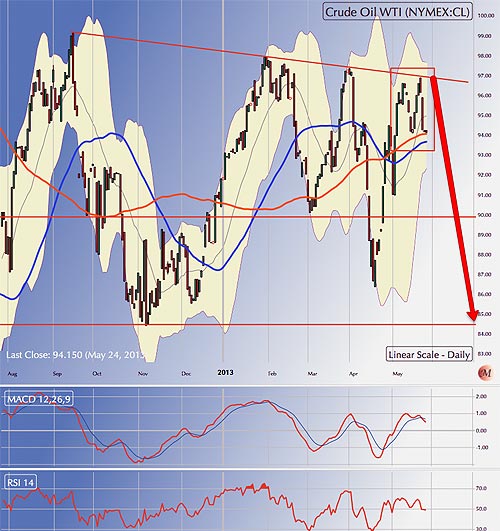 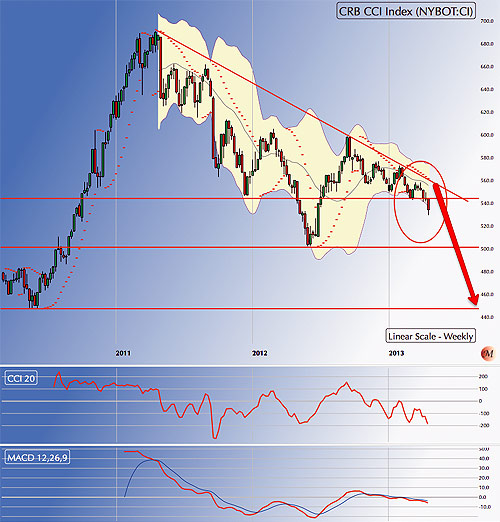 CRB CCI Index: As a check on my bearish prognosis on metals and crude here is the chart of the CRB CCI Index of 16 commodities. The index has convincinglypierced the floor at 540. First support now lies at 500, followed by a more robust at 445. My sense is that the floor at 500 is unlikely to hold. 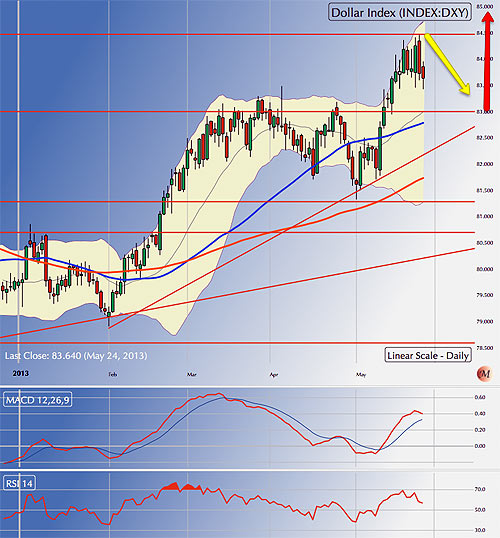 US Dollar Index [DXY]: The DXY made a higher high of 84.5950 during the week and closed Friday at 83.8030. The DXY is clearly overbought in the short term and needs to work off the excesses.  The consolidation above 83 is likely to continue for a few more weeks.  The DXY’s ultimate target for this bull run now may be as high as 89.  The next logical overhead resistance lies at 85.50 and the floor below 83 lies at 81. The DXY remain a buy at dips to 83. 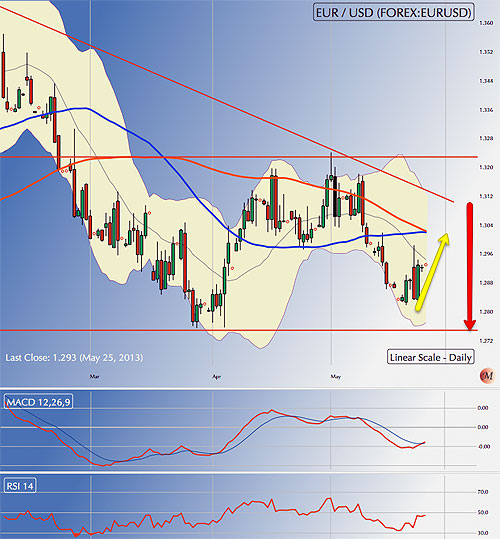 EURUSD: I had expected a more substantial rally in the euro from the low of 1.2795 but the rally topped off just under the point where the 50 DMA pierced through the 200 DMA from the top side generating a long term sell signal for the euro. The EURUSD is very interestingly poised in a region that will decide if the pair drifts towards 1.20 or 1.50. My sense is the euro will drift towards 1.3050 in the immediate future before it tells us its final direction.  First floor lies at 1.27. A break below 1.27 will likely confirm a plunge towards 1.20 levels mid-August. Once again the mid-August date crops up on the charts! Ominous. 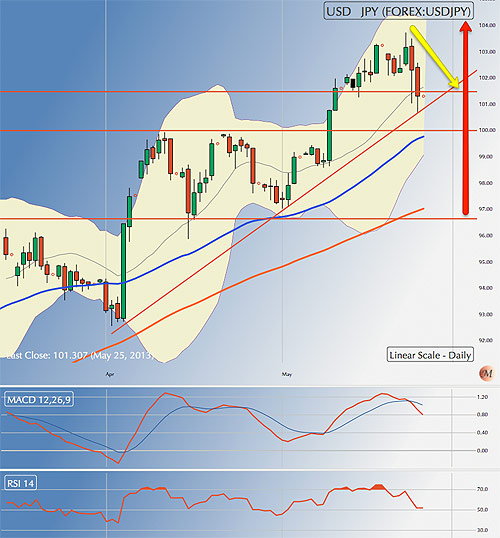 USDJPY: Clearly, the USDJPY was overbought at 103 and needed to consolidate. There is more time to this consolidation and the dollar could test 100 yen level from the topside. However, the rally in the pair is unlikely to be over any time soon. Expect a resumption of the yen’s slide after a week or two of consolidation. 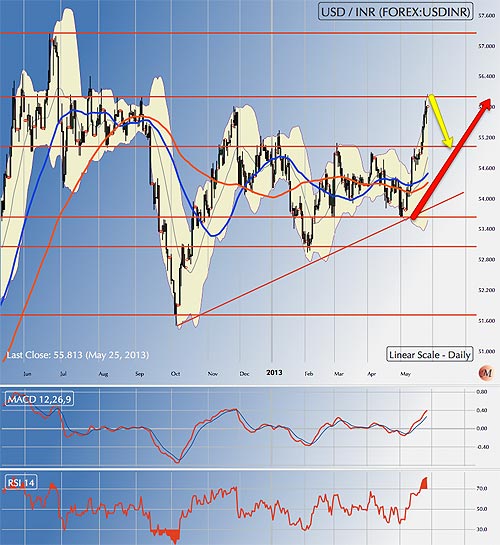 USDINR: The USDINR chart has been generating rather mixed signals of late. But it may have decided on a clearer direction over the last week or so. The dollar closed the week INR55.81. Recall a dash for INR 55.50 was expected.  The next couple of weeks will be crucial for the future of the USDINR pair. First the dollar needs to confirm it break above INR 55. A couple of weeks of base building above INR54.50 to INR 55 will point towards a retest of its last all-time high of INR57.30. On the other hand, a decisive break below INR 54 will indicate an eventual drift to INR 51. I favour the first scenario where the dollar retests INR 57.30. 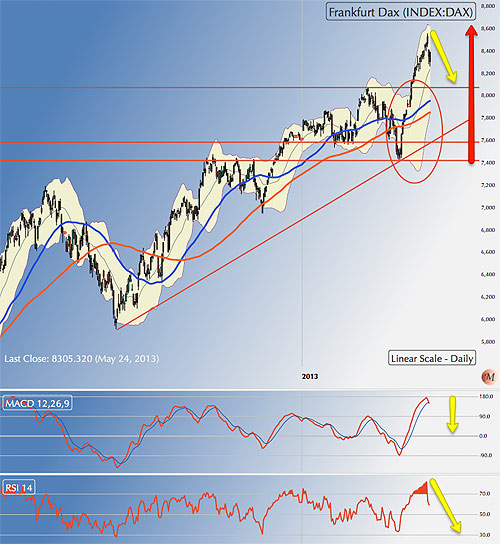 DAX: The problem with markets going parabolic, and equity markets have gone parabolic, is that charts become an unreliable guide in the short-term and stop loss points are too far away to be of help in protecting against capital erosion.  This holds true for both bulls and bears. That said, the chart indicates the bull rally is on unless 8100 on the DAX is taken out convincingly.  However, wave counts suggest a period of some consolidation ahead above 8100. Note, the 50 DMA is at 8000, while the 200 DMA is 7000. So the averages are pretty much useless at this point in telling us when and where this rally could terminate. Wave counts suggest another leg up after current consolidation. 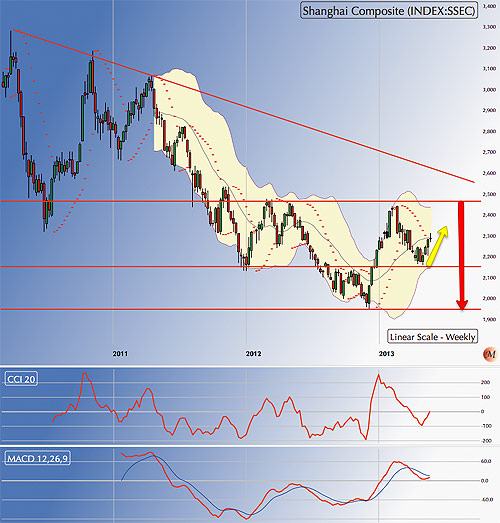 Shanghai Composite: The Shanghai Composite is close to finally terminating its bearish correction from the top of 6124 made in October 2007. How it terminates this correction will be interesting to watch as it plays out over the next few weeks. The Index is on a downtrend from the top at 2445 made in February 2013 but in the middle of a counter-trendrally midway, which may have ended at 2314. The Index should now make a dash for 2240 in short order and perhaps to 2150 after that. Being China don’t rule out 1950, the previous bottom either, though my sense is that the present dip will terminate well before that level.  Shanghai may well provide the first clue to what’s in store for rest of the equity markets. On the other hand, a rally above 2450 from current levels will signal a bottom is already in place, an unlikely possibility but one that shouldn’t be ruled out completely. Watch this index carefully along with HGCopper. 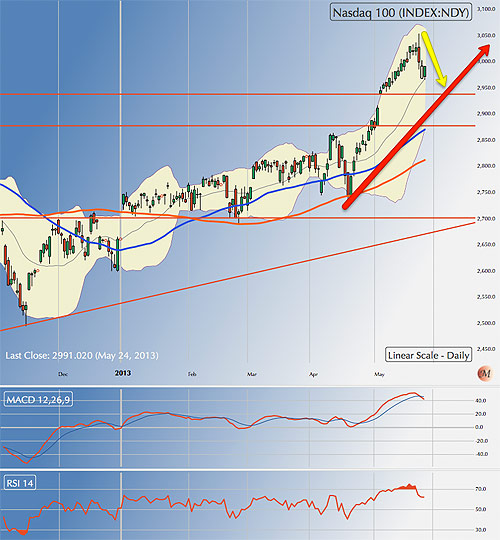 NASDAQ 100: No surprises in the NASDAQ100 chart. The Index went into a correction as expected and it could test 2850 as it continues to consolidate. 2850 is also its 50 DMA. Keep tight stop loss orders just below 2850 and enjoy the ride, which probably has another leg up, but terminating some time mid-August. 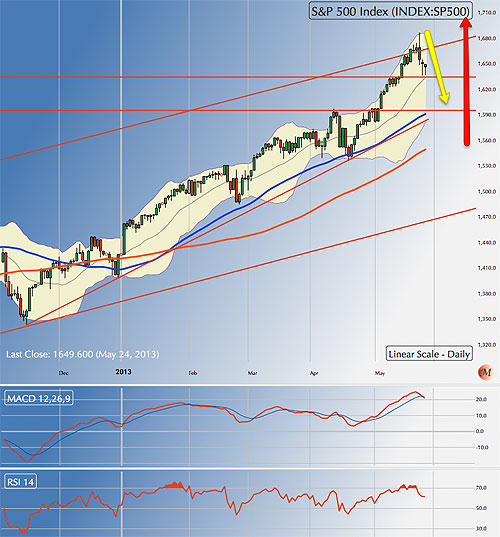 S&P 500 [SPX]: The SPX was clearly overbought at 1687 and needed to consolidate which it is doing. The index closed the week at 1649.60. The Index’s correction is likely to be brief and may not reach down as far as 1600 although that is something one would expect if the SPX hadn’t gone parabolic. Going by wave counts when is the earliest this rally can terminate assuming it has another leg up? Yes,mid-August again! Looks like all risk assets will tank together which isn’t a bad way to test the robustness of the new financial order that central banks have created. 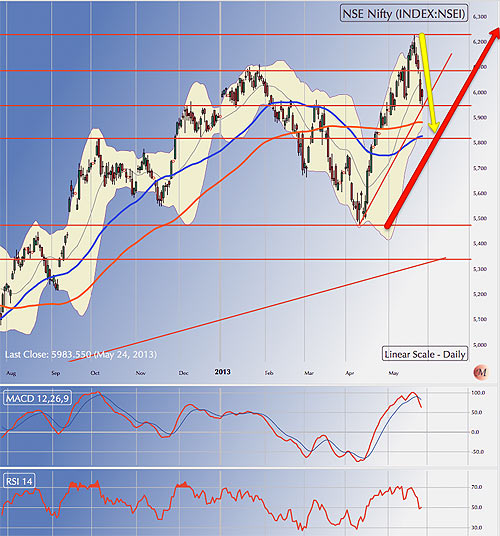 NSE NIFTY: As expected, the Nifty  turned down from the 6200 region to consolidate and test the breakout from the top side. Clearly, the breakout above 6065 has not held and Nifty closed the week 5936.80.  Nifty’s 50 DMA lies at 5843 while the 200 DMA lies at 5765.85. We can expect Nifty to take support at 5800 in the immediate future. The market’s reaction to prices in the 5800 region will tell us if the rally is to continue and test 6300. Given my wave counts, I suspect Nifty will rally to 6300 before correcting in line with other world markets by mid-August.  Keep tight stop losses below 5800.  A decisive fall below 5800 will negate my analysis.

NB: These notes are just personal musings on the world market trends as a sort of reminder to me on what I thought of them at a particular point in time. They are not predictions and no one should rely on them for any investment decisions.
Sonali Ranade is a trader in the international markets
Sonali Ranade