Why Tim Cook's coming-out is a big thing 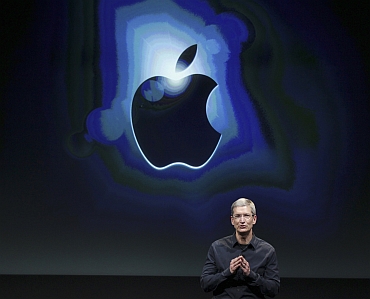 More than laws, what helps individuals, especially young people, to cope with their struggles is to have role models -- movie and television stars, musicians, sports figures and writers.

In that regard Cook’s statement is of major significance, especially given Apple’s recognition as a global brand, says Aseem Chhabra.

This weekend, somewhere in India, or Uganda or Texas for that matter, a 15-year-old teenager is sitting working on his Mac, talking on his iPhone, feeling slightly less confused.

Tim Cook’s statement that he is a gay man has made this teenager’s life a little easier. If the CEO of Apple, one the coolest companies in the world, has said he is “proud to be gay,” then hopefully this teenager must be thinking that he is not alone and the confusing sexual thoughts he has had for some time are not wrong.

At 54, Cook is leading one of the most innovative American tech companies and he is the first CEO of a Fortune 500 to declare his sexual orientation. There are bound to be many others, but living in the closet is always the safest bet for many, whether they are in the corporate world, in the arts or media.

Cook’s sexual orientation was no secret to many of his Apple employees and his friends. There was no need for him to come out and make his private life public. But as Cook wrote in his piece in Bloomberg Business Week, he was inspired by the words of Martin Luther King ‘What are you doing for others?’

And so, despite being a private person, he chose the public platform to speak the truth about himself, even though he was already out in many ways. But he was willing to trade off his privacy, if it helps “someone struggling to come to terms with who he or she is, or bring comfort to anyone who feels alone, or inspire people to insist on their equality.”

America is at a juncture where the LGBT (lesbian, gay, bisexual, transgender) rights movement is slowly winning significant battles. Many of these battles have been won during the presidency of Barack Obama, because of his liberal social agenda.

And so Don’t Ask, Don’t Tell (the legacy of Bill Clinton’s presidency) was repealed making it legal for gays and lesbians to serve in the US armed forces. Then last year the US Supreme Court struck down the Defense of Marriage Act, thereby recognising same-sex marriages under the federal laws. But marriage acts are also determined by each individual state in the US. As of now 32 states have legalised same-sex marriages.

But despite these major milestones and social acceptance, individuals continue to struggle. And those struggles are even harder in countries like India, where same-sex love was once again criminalised by the Supreme Court. The coming-out process is never easy and many find it safer to hide their private thoughts, even though that is not necessarily a better choice.

More than laws, what helps individuals, especially young people, to cope with their struggles is to have role models -- movie and television stars, musicians, sports figures and writers. And so, when Ellen DeGeneres, Neil Patrick Harris (who was a child star in the TV show Doogie Howser, MD), Stephen Fry, or the Indian author Vikram Seth, openly speak about their sexuality, it can make a huge difference.

In that regard Cook’s statement is of major significance, especially given Apple’s recognition as a global brand.

Cook has said he is not an activist and perhaps he will be too busy running his company to focus on LGBT causes. But his move is a positive step for equal rights for all.

As he wrote in his coming-out piece: ‘We pave the sunlit path toward justice together, brick by brick. This is my brick.’

Here's why iPhone 6 may be a game-changer