The hit to economic activity will be mostly confined to the first quarter.
And a third wave, if it materialises, is unlikely to be hugely disruptive for the economy, predicts T T Ram Mohan. 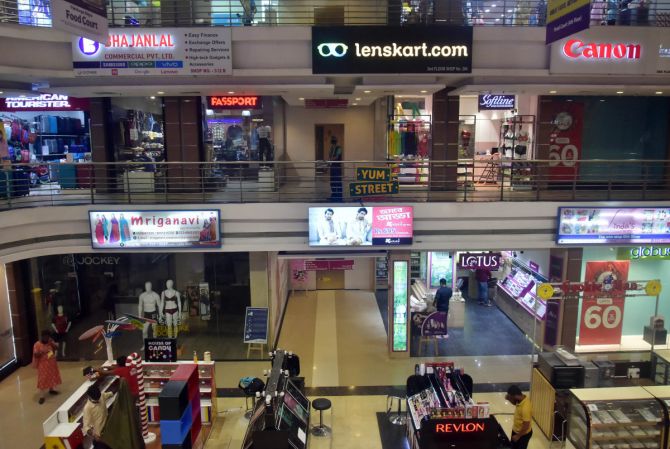 As the second wave of the pandemic subsides and economic activity revives, those in charge are confident that the economy will shrug off its impact.

The chief economic advisor has said so.

The Reserve Bank of India governor has indicated as much.

They are likely to be proved right.

The merchants of gloom, who saw the health crisis as spelling disaster for the Indian economy, will be proved wrong.

At its peak, the number of cases in the second wave was four times that in the first wave.

The first wave saw the Indian economy shrink by 7.3 per cent.

As casualties were much greater in the second wave, some were quick to conclude that it would inflict an even greater toll on the economy.

The second wave, however, promises to be far less severe in its economic impact.

Hard-hearted as it may sound, there is no correlation between the loss of lives and national output.

This truth was best exemplified in World War II.

The Soviet Union lost an estimated 21 million lives in combatants alone, not to speak of the loss of civilian lives. Yet, industrial output, driven by wartime needs, boomed.

Ditto in the United States and Britain.

In Germany, we saw something even more striking. The strategic bombing of Germany, aimed at destroying the nation's industrial infrastructure, failed miserably to disrupt the German war machine.

Modern economies are decentralised, so aggregate output is hugely resilient in the face of a variety of physical shocks to supply. Manpower, both skilled and unskilled, is plentiful enough to cope with any loss of lives in war or peacetime.

The current pandemic poses a different sort of threat to supply. In order to contain the spread of infection, we have to prevent people from congregating.

The challenge is to maintain supply in these conditions. In this respect, there has been enormous learning from the first wave.

In the first wave, India imposed a nationwide lockdown.

Inter-state transport and travel were barred.

Apart from agriculture, in situ construction, and strictly local manufacturing and services, most economic activity had to cease.

Industrial activity suffered even in areas where the incidence of cases was low.

This led to a steep contraction in output in the first quarter of FY 2020-21.

Vaccines were not available, so the exit from the lockdown was painfully slow.

Instead of a nationwide lockdown, we have localised lockdowns.

Interstate travel and transport are on.

Firms have adapted to lockdowns, not just through work from home arrangements but also with respect to logistics and inventories.

We do not have mindless prohibitions on the movement of individuals. So lockdown fatigue is less intense.

There are signs of migrant labour, which fled at the first hint of a lockdown, returning to the cities.

The availability of vaccines allows a quicker movement towards normalcy. It also affords a measure of protection against a third wave.

The boost to health infrastructure means we are better prepared for a third wave.

First, the hit to economic activity will be mostly confined to the first quarter.

Secondly, a third wave, if it materialises, is unlikely to be hugely disruptive for the economy.

Add to these the strong recovery in the advanced markets and the RBI's estimate of GDP growth of 9.5 per cent in the current year may be conservative.

As happened last year, we may expect a strong rebound as restrictions are eased in the weeks ahead.

It is not just that the short-term prospects for the economy are bright. Pessimism about the long-term outlook is also misplaced.

As is well known, the most important reason for the deceleration in growth in recent years has been the 'twin balance sheet' problem, high leverage at firms and high non-performing assets at banks. There are clear indications that we are moving towards a resolution of the problem.

Firms, especially large companies, have improved their debt serviceability through a combination of asset sales and deleveraging, cost reduction and lower borrowing costs.

The RBI Annual Report for 2021-2021 notes that in the third quarter of FY 20-21, 'both small firms and large firms have improved their debt serviceability ratios...to levels which are higher than pre-pandemic period.'

Cost cutting has been an important factor in this improvement.

As a result, operational profit at corporations increased by 7 per cent year-on-year at a time when the pandemic had caused the economy to shrink.

Indian banks today boast of capital adequacy of 15.9 per cent on the average, although the average at public sector banks is lower at 13.5 per cent. (The minimum requirement is 10.875 per cent and is poised to rise to 11.5 per cent in October).

The average provision coverage ratio of 75.5 per cent means that bad loans of the past are well provided for.

True, the pandemic shock will cause NPAs to rise again.

The data on moratorium on loan payments and restructuring suggests that the problems are mainly in retail assets and small enterprises, not in large corporate accounts. Bankers believe the rise in NPAs will be manageable.

The problem that banks face now is not so much an increase in NPAs as tepid loan growth. This is partly because private investment is yet to revive strongly.

It is also because large firms are meeting a higher proportion of their requirements of finance from internal resources, as the annual report notes.

Banks have to increase their exposure to small and medium enterprises (SMEs) in order to drive credit growth. As SME lending is riskier than lending to corporations, this cannot happen without a boost to banks' capital buffers.

The space for additional government spending is severely limited. It must be used for supporting growth by increasing capital at public sector banks and not for greater income transfers, as is widely urged.

The Indian economy is well placed to shrug off the second wave in the short term.

A quick exit from the banking crisis is the key to growth in the medium term. The government can help out by providing public sector banks the capital they need to reorient loan growth.