The labour participation rate tells us how many of the working age population are willing to be employed.
If this proportion keeps falling as it evidently is, it does not bode well for India's growth story.
It renders all stories of a revival in the economy as a myth, warns Mahesh Vyas. 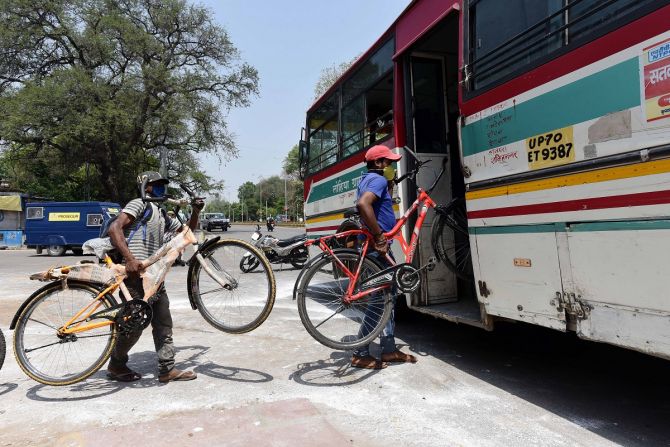 IMAGE: Migrant labourers board a bus for their villages during the lockdown. Photograph: ANI Photo

Labour market statistics improved somewhat in September 2020. The unemployment rate fell sharply from 8.4 per cent in August to 6.7 per cent.

This is the lowest unemployment rate in 18 months.

More importantly, the employment rate scaled up to almost 38 per cent from 37.5 per cent in August.

This is its highest level since the lockdown. It has more than recovered from its small fall last month. These are big and welcome gains.

A logical outcome of this migration of the unemployed into jobs is that it should attract more people to look for jobs. It should increase the labour force. But this is not what happened in September.

Its tapering in September, albeit marginal, after significant gains in the past three months should worry us because there is much room to cover yet, in the recovery process.

Remaining 200 basis points lower than in the previous year after six months a lockdown robs India once again of the potential it has in its young labour force.

The labour participation rate has been falling systematically since 2016-2017 when it was 46.1 per cent.

In 2017-2018, the year that showed the full impact of the November 2016 demonetisation and the July 2018 introduction of GST, the labour participation rate fell by 256 basis points.

The two shocks of demonetisation and GST delivered within eight months of each other had a lasting impact on the labour participation rate. The lockdown, it looks like, could deliver a similar blow to it.

The labour participation rate tells us how many of the working age population are willing to be employed. If this proportion keeps falling as it evidently is, it does not bode well for India's growth story. It renders all stories of a revival in the economy as a myth.

The employment rate has been falling in line with the fall in the labour participation rate.

For reference, according to modelled ILO estimates globally, 57.2 per cent of the working age population is employed.

By the same model India's employment rate was 47 per cent and South Asia was 48 per cent. Pakistan was at 50 per cent, Sri Lanka at 51 per cent and Bangladesh at 57 per cent.

India has a long way to go to catch up with global standards and also with its immediate neighbours. China is way ahead at 65 per cent.

For long, the debate in India has been around its handsome but jobless growth.

India's GDP kept rising handsomely till recently, but its employment did not rise.

India must arrest this fall.

But, a mere increase in employment is not an adequate target. It needs to rise at least in proportion to the rise in population.

The best way to deal with this is to make an acceptable employment rate as a policy target.

The continued absence of employment as an important macro-economic indicator in policy making even after decades of decline in employment is extraordinary.

Employment has failed to find a place in policy making in spite of continued political protests on lack of employment and demands for reservations.

Reservation of jobs now invariably face roadblocks from the judiciary. And, reservations is a zero-sum game.

It is better that India adopts employment rate targeting. Inflation targeting is not enough.

Mahesh Vyas is MD and CEO, CMIE P Ltd.
You can read his earlier columns here.