One thing is for sure: It smacks of the regulator's lack of confidence in the bank's board, points out Tamal Bandyopadhyay. On June 19, 2018, the day ICICI Bank Ltd's CEO and managing director Chanda Kochhar went on leave and Sandeep Bakhshi took over as its chief operating officer, the bank's stock rose 4 per cent. Three-and-a-half months later, in October, when Kochhar resigned and Bakhshi moved into the corner room, the stock jumped 5.8 per cent.

Many years back in late 2007, IndusInd Bank Ltd stock more than doubled when market sensed that Romesh Sobti, then executive vice president -- country executive, India, and head, UAE and subcontinent, at ABN Amro Bank NV, would take over as the boss of the private bank. Sobti took over the reins in February 2008.

Fast forward to June 13, 2022. The RBL Bank Ltd stock tanked 22.45 per cent to close at Rs 87.9, its lifetime low, after the bank had announced that the Reserve Bank of India cleared R Subramaniakumar's appointment as its CEO and MD.

Rajeev Ahuja was running the show after Vishwavir Ahuja went on a six-month leave (coinciding with the end of his tenure) in late December, protesting the appointment of an additional director by the banking regulator and, of course, the RBI's refusal to extend his tenure.

Like the chief of another old private bank, Ahuja, too, had got a one-year term, which was to end in June. While the other banker got another three-year term after completion of one year, Ahuja didn't have the luck. Had he got a three-year term, he would have completed 15 years at the helm, the maximum permissible by the regulator.

Why did the stock tank?

Prima facie, RBL Bank is not a stretcher case. Unlike Yes Bank Ltd, it's not a victim of fraud. It's a story of limitless ambition for growth.

Indeed, RBL Bank is the only entity which posted a loss in FY22 (Rs 74.74 crore/Rs 747.4 million) -- in a year when the industry recorded its highest ever net profit -- but its financials are not to be frowned on.

Despite the flight of a few bulk deposits in December, when an RBI-appointed director joined its board and Ahuja went on leave, its deposit portfolio in FY22 rose 8 per cent to cross Rs 79,000 crore (Rs 790 billion); 35.3 per cent of it is low-cost current and savings accounts.

Its advance portfolio rose just 2 per cent but overall, there is nothing scary in the balance sheet of the bank.

Then why did the stock slump? One reason could be that in his immediate past assignment, Subramaniakumar was overseeing the liquidation of debt-laden Dewan Housing Finance Corp Ltd as the administrator. The investors probably felt here he is coming with a similar mandate -- liquidation. That's not true.

Subramaniakumar's Linkedin profile describes him as a 'turnaround specialist', 'financial inclusion advisor and consultant', 'banking technology specialist'. It also talks about his expertise in IT management, compliance, governance and audit, among others.

It has been on the RBI radar since FY20 for its over-dependence on bulk deposits for liabilities and unsecured loans for assets.

The unsecured credit card business of its loan portfolio was around 20 per cent, the highest in the industry.

The bank has been going slow on asset growth, focussing on risk-management and underwriting norms as well as granular retail deposits and paring its exposure to the unsecured microfinance loans. It has also been investing in building systems, processes and the technology platform.

While RBL Bank is not collapsing, the surprise has been the choice of the CEO. I am not qualified to assess the relative merit of the two candidates shortlisted by the search committee of the bank's board, but it's a rare occasion when the RBI picked up the second person from the list submitted to it for the top job and not the first.

Traditionally, the regulator doesn't get into qualitative aspects of the candidates and approval of the first name is automatic unless the person is not found fit and proper.

In this case, this cannot be the reason as the first person on the list -- Zarin Daruwala, cluster chief executive officer, India and South Asia markets (Bangladesh, Nepal and Sri Lanka) of Standard Chartered Bank -- got a new three-year term from April.

Subramaniakumar started his banking career with Punjab National Bank in 1980. He headed business transformation at the large public sector bank for three years before becoming an executive director at Indian Bank and retired as MD and CEO of Indian Overseas Bank. The 62-year-old seasoned banker definitely has the experience to tackle RBL Bank's issues.

What about Daruwala? Is she culturally misfit because of her foreign bank background? She cut her teeth in banking with ICICI Ltd, the development finance institution which later got merged with ICICI Bank, after a stint with eminent chartered accountant and longest serving director on the RBI board Y H Malegam before joining.

At ICICI Bank, she was exposed both to corporate banking as well as rural banking. In fact, she had started the rural and agribusiness at the bank. After joining Standard Chartered Bank in 2016, she turned around its retail business.

The search committee consisted of two members of the nomination and remuneration committee of the RBL Bank board, another board member and an outsider -- Pradip Shah, the first MD of rating agency CRISIL Ltd and founder of IndAsia Fund Advisors. It was assisted by Egon Zehnder, a global management consulting and executive search firm.

I am sure the RBI had looked into culture, competence, compatibility and compensation while choosing the CEO of RBL Bank. Since Daruwala's current package is quite handsome, the search committee must have recommended liberal ESOPs for her.

Had this gone against Daruwala? But ESOPs are earned. One needs to perform to make money through ESOPs. Or, has her recent extension of term at Standard Chartered Bank blocked her passage to RBL Bank?

While I am not qualified to pass any judgement on the RBI's choice, one thing is for sure: It smacks of the regulator's lack of confidence in the bank's board.

Or, is there something else we aren't aware of? 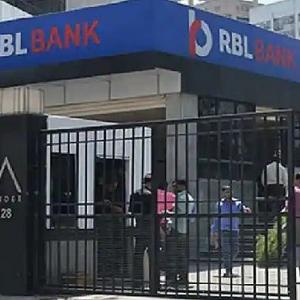