Without periodic booster shots to display of strength, how is this government what it aims to be?
There was also the landscape of prosperity pictured; the in-season affair with 'amrit' stretched to a longer residence in 'Amrit Kaal', notes Shyam G Menon. 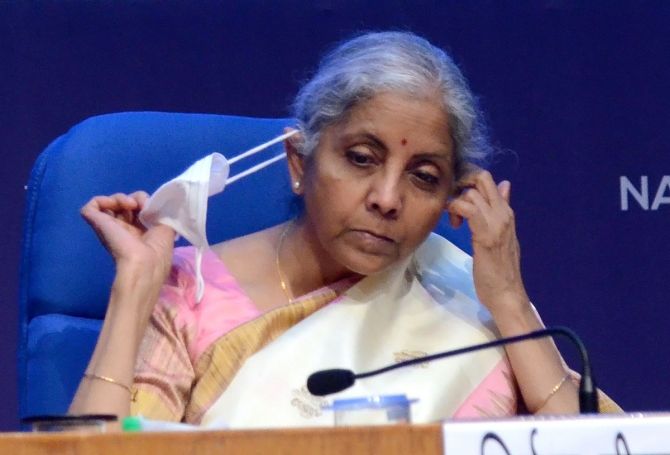 To the first category fell the multiple uses of 'shakti' in the 2022-2023 Budget; its association with government schemes.

At times of battering by the pandemic, it left an odd taste.

Then, the television viewer remembered: This is a government, which loves muscularity.

From 'Gati Shakti' to 'Drone Shakti', affixes referring to strength and power are bound to be there.

Without periodic booster shots to display of strength, how is this government what it aims to be?

There was also the landscape of prosperity pictured; the in-season affair with 'amrit' stretched to a longer residence in 'Amrit Kaal.'

In PR, muscularity is nothing without ownership stamped on it. Hence perhaps the prefix of PM to these schemes.

Not to mention -- Prime Minister's Development Initiative for North East with its unforgettable abbreviation: 'PM-DevINE.'

The Opposition may criticise such tactics. But knowing India and its politicians, any other government too would love to continue the practice.

It will be decades before we have political personalities averse to associating their self and office with government schemes. Till then, 'vision' flows top-down.

The abrupt winding up, struck an ominous tone.

Given pandemic related expenses incurred, it was known that the government may be tight-fisted, that it may even demand from us.

With rather odd instances of penalising -- like transfer of virtual digital assets taxed heavily -- and little mentioned on the income tax front, there was fear that the devil maybe in the details.

Is that why the minister ended her speech early?

As of evening on the same day, income tax rates were reported unaltered even though there had been calls to tax the rich.

While the middle class may have wished for tax concessions, being spared additional outgo was relief.

The calls to tax the wealthy were mainly due to the phase we are in.

A large number of people had lost their jobs and suffered financially during the pandemic.

At the same time, some of the super-rich and those linked to sectors that boomed during the pandemic, visibly gained wealth.

On the one hand, there was the daily reporting of COVID-19 cases and fatalities; on the other, were reports of billionaires and millionaires witnessing hike in their fortunes.

There were even a couple of the super-rich abroad who forayed into space as tourists with a sizable PR machinery latching on to every superlative in their description of the trip.

For those like this author who watched the broadcast, it felt like planet in flames and only those with the ability to afford a ticket as space tourist, capable of escaping catastrophe (the imagery was satirically depicted in the 2021 film Don't Look Up as well).

Pre-budget studies in India had speculated on how much money would be freed up for use if the wealthy was taxed.

No such tax was announced in the union budget.

By not doing so, the government may have turned a Nelson's Eye towards income inequality and the general plight of the middle class and the poorer sections navigating their way through pandemic, radical shifts in lifestyle and inflation.

At the same time, the government seemed to indicate that its preferred route to bridging income disparity is not taxing wealth but creating avenues for work.

Capital expenditure was projected to go up by 35.4 per cent.

There was also the massive interest free 50 year-loan of Rs 100,000 crore to states to aid their capital expenditure.

Still, some of the budget's high-profile initiatives appeared focused on categories like infrastructure, logistics, 5G (including content synergic with advanced telecom networks, like AVGC [animation, visual effects, gaming, comic]), digitization and solar energy - among them sectors linked to corporate groups popularly seen as close to the ruling dispensation.

Plus, there was corporate tax remaining unchanged and a reduction in corporate surcharge (it and tax reliefs for the co-operative sector were the only reductions of that sort one recalled hearing in the budget speech).

Despite two years of trauma by pandemic there was no interesting announcement for the public at large (save an expression of empathy for those affected by the pandemic).

All income tax slabs were retained as such, corporate tax continued as before and corporate surcharge reduced.

There was no word on how inflation -- already reported to be on the rise -- may be checked despite new money flows looming ahead at times of income disparity and sections of the population left financially challenged.

The game appeared to be -- earn and stay ahead of prices.

Sort of survival of the fittest, a paradigm muscular politics love.

A pattern seemed to emerge on who likes this government, who the government likes and what our collective co-existence in the economy, would be like.

This has been a government telling us constantly who to fall in line with, beginning of course, with the ruling political imagination.

But who else do they wish us to look up to and learn from?

By evening, sectors like healthcare and hospitality had expressed disappointment with the budget.

The motive for continued GDP growth and its architecture, stood bared.

The Sensex rose by 848 points bringing cheer to companies and shareholders that gained.

The government and those from the ruling party praised the Budget as one.

The Opposition criticiSed it.

End of another Budget day.

And the beginning of Amrit Kaal.