'Curiously, Pinarayi's approach, stressing the imperatives of development, is robustly backed by Nitin Gadkari.'
'I stand next only to Gadkari, one of the few outstanding ministers in the Modi government, in applauding Pinarayi's political courage and vision,' says Ambassador M K Bhadrakumar. 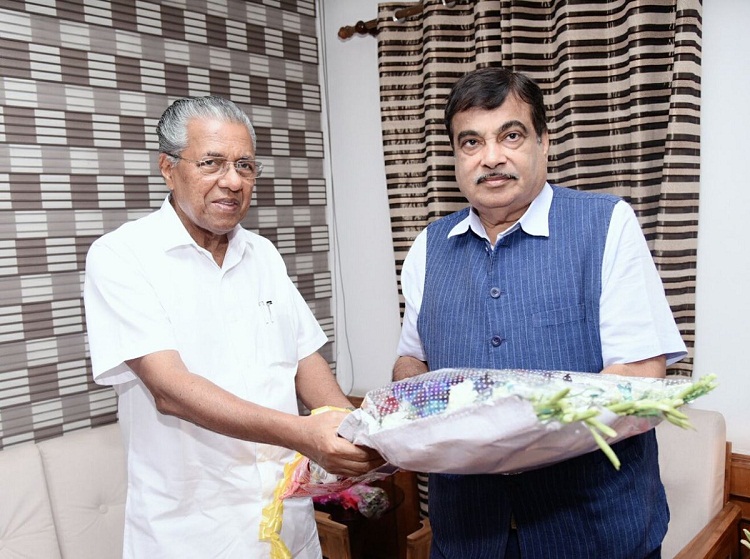 The American think-tank, the Carnegie Endowment for International Peace, had featured a riveting 'curtain-raiser' to the 2014 general election entitled Does Good Economics Mean Good Politics In India? (external link).

The essay appeared in December 2013 and I'd carefully stored it in my archives, as a fairly prescient analysis of 'a noticeable shift in the voting patterns in India' toward prioritising good economic performance when evaluating incumbent governments.

Of course, this nascent and uneven shift continues to run into the headwinds of entrenched political culture devolving upon patronage, populism and parochialism and the run-of-the mill Indian politician still believes that good economics does little to help -- and may even harm -- future political prospects.

The above dialectic playing out in India's electoral politics casts shadows on the raging controversy in Kerala currently over land acquisition measures initiated by the state government for the widening of the national highway passing through Malappuram district in Malabar.

Unsurprisingly, there is resistance from private landholders.

Land is a precious asset for the Malayali -- second only to his daughter.

Thus, the Opposition parties, including the Congress party, lent support to the agitation by private landholders. (I wonder what Rahul Gandhi thinks of these mofussil leaders with tunnel vision.)

What complicates the situation is also that Malappuram is a Muslim-majority district and 'vote-bank' politics comes into play.

However, the stunning thing is that Kerala Chief Minister Pinarayi Vijayan is adamant that the infrastructure development must be advanced in the long-term interest of the state's economy.

I stand next only to Gadkari, one of the few outstanding ministers in the Modi government, in applauding the political courage and vision shown by Pinarayi.

In the run-up to the Kerala state election in May 2016, Pinarayi and the secretary of the Communist Party of India-Marxist, Kodiyeri Balakrishnan, had taken a 'brainstorming session' with a few of us in Thiruvananthapuram to discuss the priorities of a Communist government, if elected to power. (The writing on the wall was already there that the Left was coasting to victory.)

When my turn came, I made a brief intervention, prefacing that my life was largely lived outside Kerala, but certain observations could be relevant drawn from a life spent in as many as 8 countries as a diplomat keenly observing men and mice:

But I came away feeling throughly disheartened because no one else picked up my hypothesis and I had an uneasy feeling of having been heretical in a gathering of leftist thinkers.

However, Pinarayi's forceful leadership on infrastructure development in the state seems a game changer.

Of course, the widening of a national highway is not a big deal, but in the Kerala context, it can be a defining moment.

The point is, the world is changing and India (and Kerala) cannot remain rooted in time.

The Financial Times published a report on the weekend that the US is backing the proposal for a $13 billion capital increase for the World Bank, and as part of the deal, China will see its voting power in the International Bank for Reconstruction and Development (IBRD) rise from 4.45 percent to around 5.7 percent.

In the classic line of Left politics, the World Bank and the IBRD are despised as agents of Western neo-liberal imperialism.

And here is China moving into the driver's cabin to navigate the vehicle.

To my mind, the US is probably gearing up to mainstream China's Belt and Road Initiative.