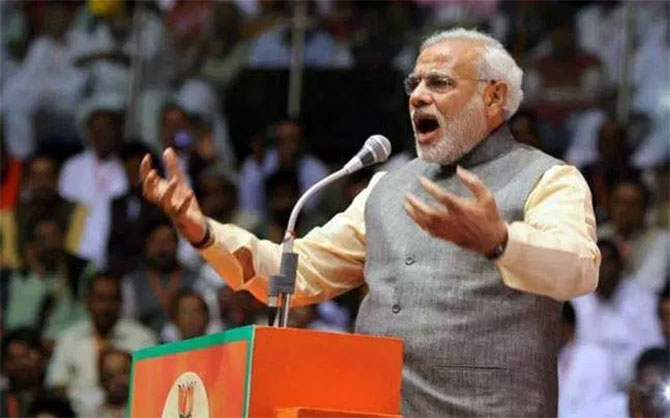 IMAGE: 'Politicians who get elected through a process that is steeped in unaccounted cash, cannot be expected to pass laws and set rules that will stifle the role of black money,' says Subir Roy. Photograph: PTI Photo

Black money has been as perennial a subject of public discourse in independent India as has been its ability to survive.

The received wisdom was: High tax rates, controls and shortages generate corruption and black money. So, get rid of these and you will cut off oxygen to black money. But black money continues to survive despite reforms removing so many of its causes.

Amnesty and demonetisation have happened in the past (a tax amnesty was declared in 1997 and there was a demonetisation in 1978) but this time things appear to be different.

It is rational to use a carrot-and-stick approach -- first offer a window of amnesty and then go on the offensive by initiating demonetisation. But things have not stopped there.

Prime Minister Narendra Modi has identified benami property, a key store of wealth created by black money, as the next target and asked people for 50 days before passing judgement.

But 50 days is neither here nor there. It is too long for administering shock treatment and too short to win a decisive battle. So, the question emerges: What is the wider political strategy behind Mr Modi's concerted attack on black money?

'To get rid of black money, it will be critical to change the way elections are funded so that black money ceases to play a role in them. A campaign against black money will have to be in the nature of a satyagraha.'

One theory initially was that by demonetising (immobilising Rs 500 and Rs 1,000 currency notes), the ruling Bharatiya Janata Party, having taken care of its own resources, will in one stroke rid the major Opposition parties of a considerable part of their resources and thus severely handicap them in fighting coming assembly elections.

But this purpose was served by demonetisation. To go further indicates a more fundamental game plan.

Is Mr Modi trying to make corruption a key issue in future elections and thus seeking to steal the political clothes of the Aam Admi Party and Delhi Chief Minister Arvind Kejriwal?

'Demonetisation has major fallouts.'
'Economic life is being shaken at all levels except the corporate.'
'Smaller businesses, right up to retail, have been disorientated and are witnessing a fall in sales.'

If this is so, then two theories follow. One, Punjab is sending the signal that cleaning up public life, both in a specific (drug abuse) and general sense (corruption), will emerge as a dominant issue. And on Punjab, the talk is that AAP has a good chance of doing well.

The second theory is more significant. Mr Modi fought and won in 2014 by promising Vikas (progress) to aspiring middle-class India, located between peasants and the urban middle class.

But in over two years the new jobs have not come and instead mobilisation has taken place through first flogging the Hindutva agenda (from 'love jihad' to 'gau raksha') and thereafter raising the security pitch over Pakistan.

But there is a limit to rising tension over Pakistan as it can end up in war. So is launching a jihad against black money the BJP's next instrument of political mobilisation as Uttar Pradesh goes for elections?

There are major fallouts, political and economic, to this agenda. It will adversely affect the trading community (not known for its love for paying taxes), a key constituency of the BJP, and can be rationalised only if we see the exercise as losing a numerically smaller support base for a larger one (the aam aadmi who wants to stop paying bribes at every step).

Additionally, economic life is being shaken at all levels except the corporate.

Smaller businesses, right up to retail, have been disorientated and are witnessing a fall in sales.

What is more, even microfinance institutions, which lend small amounts of money to the poor have been hit. The lack of banking facilities in rural areas, where borrowers can change demonetised notes they had set aside for repaying instalments, has hit MFI recoveries.

If the banking system and overall economic activity take weeks to recover from the disruption, then that will be one cost. The longer term one will be the deflationary impact on the economy as demand suffers from a partial demobilisation of income and loss of wealth.

The crowning irony is that the critical aspect about eradicating black money is not destroying its stock (hoarded currency and benami property) but nipping its creation in the bud -- attacking the flow of black money so that its fresh generation stops.

That will take not 50 days, but years as a new culture of business and politics must emerge.

I G Patel, Reserve Bank of India governor when demonetisation took place in 1978, recalled in his memoirs that he tried to dissuade the Janata Party government from demonetisation, pushed for by politicians who wanted to 'punish their corrupt predecessors' as 'such an exercise seldom produces striking results.'

The idea that black money is 'tucked away in suitcases or pillow cases is naive.'

To get rid of black money, it will be critical to change the way elections are funded so that black money ceases to play a role in them.

It is axiomatic that politicians who get elected through a process that is steeped in unaccounted cash (witness the pre-election seizures), cannot be expected to pass laws and set rules that will stifle the role of black money.

Only donations and contributions above Rs 20,000 to a political party have to be accounted for and there is no limit to how much a party can spend. Candidates have spending limits which are a bit of a joke.

A campaign against black money will have to be in the nature of a satyagraha and going by look and body language, a homespun person like Anna Hazare seems to fit the bill.

Mr Modi, on the other hand, seems to be personally far too well-groomed and media-savvy to carry conviction.

So when he gets emotional about black money, only time can tell whether he is on a moral crusade or pursuing a political strategy.