Two months ago, on February 12, Rahul Bajaj passed into the ages.
'Rahul inspired Indian industry with an ethos, an ethos of being more confident, more independent, more thorough, more competitive, more generous, more public-spirited, and more national and more international all at once,' remembers Naushad Forbes. 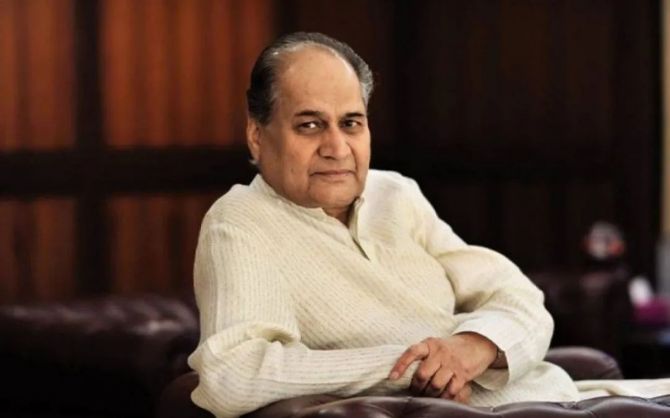 In my book, The Struggle and the Promise, my belief in India's potential for great achievement is front and centre.

No one lived this belief more visibly and articulately than Rahul Bajaj.

My book argues for much change in government policy and our institutions.

But I especially demand much more from Indian industry.

To achieve its potential, Indian industry must look a lot more like Rahul Bajaj and his companies.

Indian industry must, in the future, be more of four Is: Inclusive, international, innovative and independent.

The Bajaj Group consistently ranks in the top 10 CSR spenders in the country.

CSR was a personal passion for Rahul; he chaired the CSR committees of his companies, knowing in detail which project was being funded and why, and how it was performing.

The Bajaj group CSR funding is increasingly focused on skilling, so thousands more can get good quality jobs.

But inclusive also applies to markets for the products and services of the group.

Bajaj Finance has over 40 million consumers who live a better life because of their ability to immediately access goods they otherwise would need to save for.

We must be more international. Bajaj Auto this year will get over half its sales from exports, selling motorcycles and three-wheelers in over a hundred countries around the world, and is the lead brand from Nigeria to Bangladesh to Iran to Egypt.

Rahul Bajaj was the articulate voice of and for Indian industry and India in forums around the world -- at the World Economic Forum, the Harvard Business School, Brookings, the Commonwealth Business Council and others.

As the leading spokesperson for the Bombay Club, he argued for protection for Indian industry (about the only issue on which we disagreed).

His motive was always fiercely competitive -- to outcompete the best firms worldwide.

We must be more innovative. Bajaj Auto is known for its R&D.

Bajaj Finance may officially be a consumer finance company, but is really a fintech company that innovates constantly.

And new ventures in the Bajaj Finserv stable are defining new business models in exciting fields.

We must be more independent. Decades of the licence raj bred a private sector that looked to the government for protection and favours.

A private sector dependent on the government cannot speak with an independent voice.

When Rahul Bajaj made his famous comment two years ago to three Union ministers at an awards function, he ended with the line that 'I may be wrong, but everyone feels that.'

True enough, and while everyone felt that, only Rahul had the courage to say it.

His comments made the headlines across the media, with our talk shows organising their usual shouting matches several evenings running.

An industrialist criticising the government should not make the headlines.

That must be a basic feature of an independent private sector.

To get there, we all need to follow Rahul's example, praising when it is due, but criticising, equally, when that is due -- until criticism stops being newsworthy.

There is much more for us to learn from Rahul.

He always exuded confidence. In himself and his group, yes, but equally in India and Indian industry's ability to compete with the best worldwide.

He was completely authentic. Both government and close friends heard the same words in the same voice.

In short, he inspired trust. He was institutional, wanting the institution to prosper and thrive.

He took tremendous pride in both his sons as they built businesses of even greater success.

He took pride, too, in those of us who succeeded him in roles; I do not think he ever realised how much his support meant to us.

I remember when I was part of my first CII annual general meeting as vice-president, with the finance minister on the dais, looking out at 5,000 faces, wondering why I was doing this.

I saw Rahul (and some others) in the first row.

Maybe I was imagining all this, but a small nod, a brief smile, somehow conveyed an abundance of support and confidence.

I knew I had a legacy I must do my best to live up to.

At CII, we saw him as the person who owned the soul of the institution, someone who would keep calling us back to our purpose of promoting India first, then Indian industry, then CII, and never our own firm.

Whether at CII or in the many other institutions that Rahul was involved with, he engaged completely.

He studied the papers, was questioning, demanding, humorous and hugely supportive all at once.

Thinking back on the life of this warm, generous, forthright and principled human being, on this life of amazing achievement, what is Rahul's legacy? Certainly it is the Bajaj group, the wealth it has created and is to create.

It is all the institutions that owe their existence or are today stronger thanks to his contributions of time, money and leadership.

It is a much stronger and more independent CII.

Rahul inspired Indian industry with an ethos, an ethos of being more confident, more independent, more thorough, more competitive, more generous, more public-spirited, and more national and more international all at once.

The outpouring of grief we have seen these last few days is a statement of the deep affection that wider society held for him.

Indian industry can pay him no better tribute than by living true to that ethos.