‘Other than addressing the problems of cane growers, the government has done little to boost rural demand.

‘Bear in mind that agricultural prices have been depressed, and rural wages have been more or less static for the past five years.

‘Apart from which, there remain all the structural issues that wait to be addressed,’ says T N Ninan. 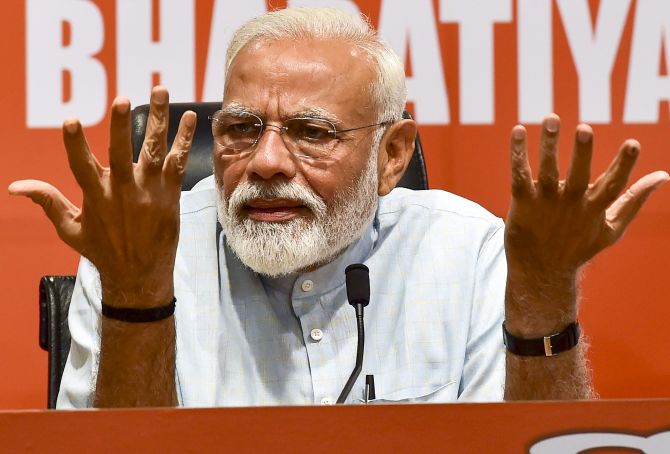 It has long been said that it takes a crisis for Indian politicians to undertake systemic economic reforms. We have seen the truth of that adage over the past week.

That would explain the brilliant timing of the finance minister’s press conference, 90 minutes before the lowest quarterly GDP growth numbers in six years were announced, with manufacturing growth at a dismal 0.6 per cent. The National Statistical Office’s ominous thunder faded in impact, given Nirmala Sitharaman’s lightning strikes in banking.

So we have twin narratives. On the one hand, the economy’s tempo is slower than at any point since the days of the “fragile five” in 2013 (when oil prices were twice as high). Growth over the last four quarters has averaged only 6.1 per cent. With the last quarterly growth figure of just 5 per cent, and dim prospects for the current quarter, get ready for the slowest annual growth since 2012-13.

The government has partially neutralised the impact of such bad news with its counter-narrative, of being responsive to the emerging situation.

Since successive crises in the financial sector are seen as having impacted the broader economy by disrupting the flow of credit, the government has focused its attention on that by frontloading the re-capitalisation of its banks and now by folding 10 banks into four.

Both announcements are designed to make for entities with stronger balance sheets. RBI has chipped in with a larger-than-usual dropping of its policy rates to the lowest level in nine years.

Other announcements have come thick and fast. There have been rollbacks of tax pronouncements in the Budget, the further opening up of mining and retailing to foreign investment, and a massive subsidy for sugar exports so that mills will use the money to pay sugarcane farmers their dues. More generous depreciation rates have been designed to boost the sagging sales of commercial vehicles.

Also coming, it is said, are a boost to government investment in infrastructure, incentives to promote exports, and a package for real estate.

Meanwhile, the recent softening of the rupee’s external value despite weak oil prices suggests a very belated realisation that an over-valued currency does the economy no good.

It is hard to recall another week in the two Modi governments’ history that has been as packed with economic policy pronouncements. Senior government personages say that the government is now in listening mode, and willing to pay heed to criticism -- something endorsed by businessmen. So what does it all amount to?

As a strategy, a steady flow of announcements is probably better than a single big-bang package that, if it fails to do the trick, leaves the situation even less hopeful than before.

A continuous flow of announcements makes for lower risk and a more open-ended approach, since it can be continued till the cumulative impact makes people start thinking differently about the future, and (hopefully) begin to spend or invest more.

Viewed through this prism, the government needs to do some more, and to plug some important gaps, before it can hope to change the mood.

As a first-line objective, the government would want to arrest the cyclical downswing and for consumption and investment to bottom out. Change will have to come first in consumption, since companies with stressed cash flows will hold off on investment till they see signs of improved sales.

Bankers say the demand for corporate credit remains weak, but retail demand could well pick up by the festival season -- if, by then, today’s postponed demand starts spilling out.

However, other than addressing the problems of cane growers, the government has done little to boost rural demand.

Bear in mind that agricultural prices have been depressed, and rural wages have been more or less static for the past five years.

Apart from which, there remain all the structural issues that wait to be addressed.

So, long haul yet before the narrative really changes.