Three years after the prime minister's election promise that his government would create 10 million jobs, the emerging picture is not pretty. Employment HAS TO take on a critical status in the government's agenda, says Shyamal Majumdar. 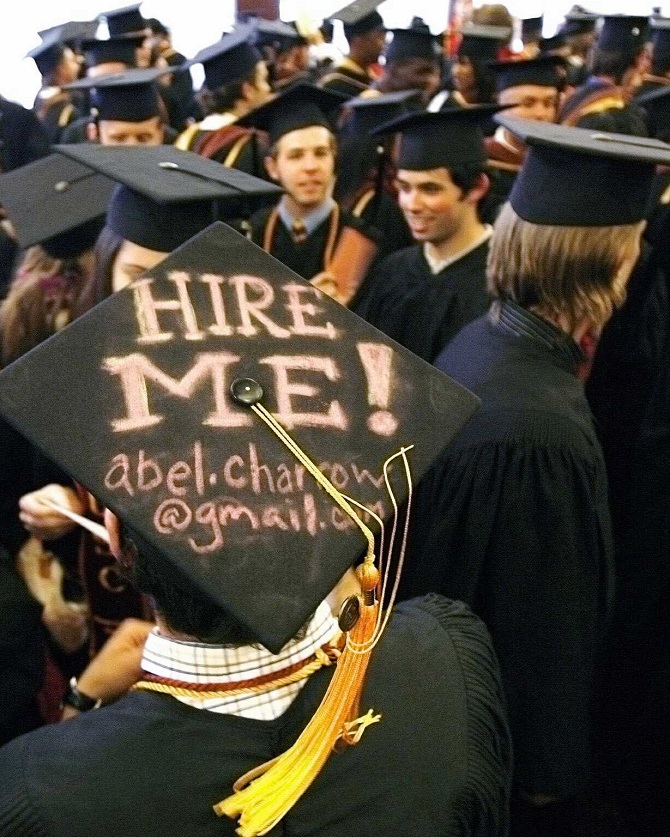 IMAGE: Data compiled from the Labour Bureau's quarterly report on changes in employment in selected sectors reveals that employment creation even in the most labour-intensive sectors in 2015 plummeted to 135,000 jobs, compared to 930,000 jobs that were created in 2011. Considering that 1 million new people join the workforce every month, the 2015 figures mean that just 0.01 per cent of new workers actually found work.
Photograph: Mario Anzuoni/Reuters.

In its Employment Outlook Survey for July-September, 2017, the human resource consulting firm says the jobs market might continue its downward slide for the sixth consecutive quarter. In fact, the hiring forecast for India is least optimistic since the survey was launched in 2005. Net employment outlook for the third quarter is +14 per cent, compared to +35 per cent in the year-ago period.

Considering that 1 million new people join the workforce every month, the 2015 figures mean that just 0.01 per cent of new workers actually found work.

One can justifiably argue that the Labour Bureau operates with an extremely restricted sample that covers just 30-32 million people in eight sectors. So, let's go beyond Labour Bureau data.

A Deutsche Bank research note says that with urban employment growth stalling over the past few quarters due to slowing investments in e-commerce/internet start-ups and a slump in Indian IT services demand, job creation is likely to take on a critical status on the government's agenda as it enters the last two years of its term.

If there are still some doubts over the crisis, listen to Chief Economic Advisor Arvind Subramanian.

This is what he said in mid-May this year: 'India's current employment challenge is particularly difficult as sectors that did well in generating jobs in the country's previous economic boom years -- IT, construction and agriculture -- are in trouble now.'

It is being argued in some quarters that jobs data usually hide the real picture as they do not cover the unorganised sector, which constitutes over 85 per cent of the total labour market. But if organised sector job growth has slowed down so drastically, it is a leap of faith to expect that unorganised sector jobs have shown a robust growth, specially when sectors such as construction and small businesses employing casual labour are in trouble.

In a recent report, it said the country has created opportunities for 'gainful employment' for the workforce.

For example, the apparent sluggishness in job creation disguises significant structural change: While agricultural employment has fallen sharply from 2011 to 2015, non-farm employment has risen by more than 8 million jobs a year.

The Labour Bureau's 2016 report also paints a dire picture of under-employment, which are of two types -- not finding work for a full year and working at very low wages.

Only 61 per cent of people in the workforce were found to have year-round jobs, with 34 per cent working only 6-11 months even though they were willing to work for 12 months.