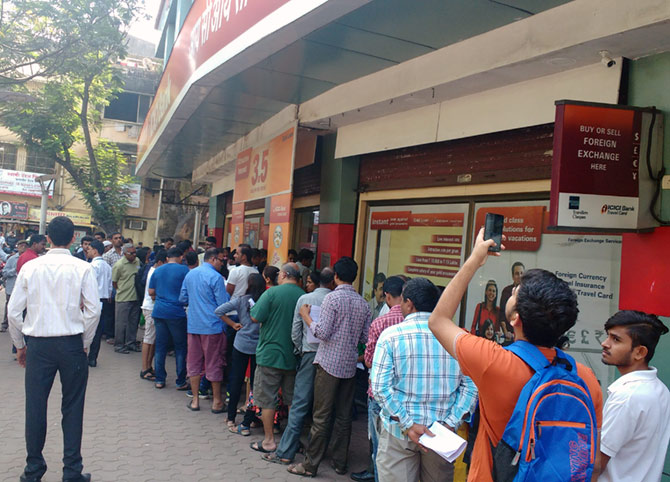 Demonetisation should be judged to have delivered some immediate gain if at least around Rs 2 trillion gets immobilised, says Ashok K Lahiri, former economic advisor to the Government of India.

A primary aim of the demonetisation of Rs 500 and Rs 1,000 notes on November 8 was 'eliminating' black money.

The two previous episodes of demonetisation of high value notes over Rs 100 in India, on January 12, 1946, and on January 16, 1978, also had the express objective of containing black marketing or black money.

No country has succeeded in eliminating black money.

Even reducing the menace of black money in India will require improving tax compliance and administration, including detecting and punishing defaulters and tax evaders, and changing the social norms of accepting corruption as a given, immutable fact of Indian life.

Thus, even if there is a government plan of concerted action for fighting the menace post demonetisation and it is working, the reduction in the parallel economy will not be obvious to be perceived soon.

Black cash is only a small fraction of the black money problem.

There is black wealth -- for example, real estate, gold jewellery and bullion, financial instruments such as shares -- accumulated from past black income, that is income which is either illegal or on which tax has been evaded.

Is demonetising high value notes like trying to catch the tiger of the 'parallel economy' by the tail?

Almost everyone has suffered the pain of cash shortage resulting from demonetisation.

Now, is there a yardstick by which this demonetisation can be judged to have delivered at least some worthwhile immediate gains?

Let us call the admittedly small portion of black money held in the form of cash, 'black' cash, to distinguish it from 'black' real estate, 'black' precious metals or jewellery, and other 'black' categories.

Cash, unlike fixed deposits, does not grow over time, and, with inflation, erodes in value.

Though an unattractive store of value, it is a critical component of the black economy as a medium of exchange.

A person selling a house, or goods from a shop or factory, or legal services, and not intending to pay the requisite taxes, demands payment in cash.

A cheque or inter-bank transfer leaves an inconvenient paper trail of the transacted amount.

For large amounts, the black currency is in high denomination.

Transactions in the underground economy -- bribes, including to political parties as 'donations', drug trafficking, prostitution, bootlegging and gambling -- tend to be on a cash basis.

So is transaction in lawful activities -- for example, legal and medical counselling and independent contracting -- not to be reported in tax returns?

Black currency is that part of the currency that has mediated black transactions and is still with the perpetrators.

Albeit, there is some to and fro between white and black cash, but the two circuits are semi-independent.

A few thousand of black cash when spent on groceries or fuel for a car becomes white in the hand of the recipient, but a few lakh of rupees of black cash received from the sale of real estate tends to remain black when recycled in the acquisition of another real estate or bullion.

Converting black cash into white has its problems.

Converting white into black is not easy either.

When a seller demands '50:50', half each in black and white, and you do not have black cash, withdrawing your tax paid savings from your bank account in several instalments is an arduous exercise.

So, if a large part of the black cash gets immobilised by demonetisation, the immediate regeneration of black income will face some hurdles.

Of this, 89%, or Rs 129.4 crore, came back for exchange. Some black cash holders prefer not to exchange for fear of detection.

Given the decrease in the proportion surrendered for conversion between 1946 and 1978, and the increased efficiency of tax administration and banking industry in monitoring such conversion, if 85% or less is converted in the current round, then the November 8 demonetisation can be taken to have delivered some immediate gains.

When Rs 500 and Rs 1,000 notes deposited cannot be accounted for, the Taxation Laws (Second Amendment) Bill, 2016, passed by the Lok Sabha on November 29 proposes to augment the tax to 0.75%, together with a penalty provision of a further 7.5%.

It also includes taxation and investment regime for the Pradhan Mantri Garib Kalyan Yojana, 2016, providing an opportunity to pay tax of 50%, with 25% of the disclosed sum invested for four years in the interest-free government deposit scheme.

Apart from the high value notes that do not come back, the amount received under the amended provisions should be included in how much is demobilised.

Demonetisation should be judged to have delivered some immediate gain if at least around Rs 2 trillion gets immobilised.