News
Business
Movies
Sports
Cricket
Get Ahead
Money Tips
Shopping
Sign in  |  Create a Rediffmail account
Rediff.com  » Business » How India can grow at 8-10% for over a decade

‘The cost of doing business in India is much too high and adversely impacts competitiveness.

‘A holistic assessment and a sustained effort to reduce costs for business would be a key structural reform that would enable India to grow,’ says Ajay Shankar.

There is a healthy debate on whether the economic downturn is cyclical or structural, or both.

The government has announced stimulus packages and there is ongoing commentary on their likely impact.

Then, there is renewed advocacy of reform measures such as divestment in public sector undertakings and banks, as well as change in labour laws.

However, one core issue does not get enough attention.

This is the cost of doing business in India.

It is much too high and adversely impacts competitiveness.

A holistic assessment and a sustained effort to reduce costs for business would be a key structural reform that would enable India to grow at 8-10 per cent for over a decade.

High real interest rates have got sufficient attention and there is consensus that they need to come down.

The Reserve Bank of India has been moving in the right direction.

But there are other important costs which are far too high and reduce competitiveness as a result.

Energy is one major element of cost for business.

In electricity, India has the highest tariffs for industrial and commercial establishments, well above the cost of supply, so as to cross-subsidise other categories of consumers.

The Electricity Act of 2003 has an explicit provision mandating reduction of cross-subsidies.

The tariff policy notified under the Act required tariffs to be brought within the band of 20 per cent above and below the cost of supply, while keeping a low lifeline tariff for consumption of up to 100 units per month.

This provision of the law and policy has been ignored across the country so far.

Most of the electricity in India is generated from coal, which is carried to thermal power plants by rail.

The freight rate for transporting coal is over twice the cost, so as to subsidise passenger traffic.

The cost of producing electricity is thus made artificially higher -- by over 50 paise per unit in northern and western India.

Clearly, lowering the cost of electricity for business has not been a material consideration.

Transportation is a major cost, direct or indirect, for all business.

These costs are primarily fuel costs (petrol and diesel).

These are taxed at over 50 per cent.

Only alcohol and tobacco are taxed higher.

There is no good reason why these should not be brought under the Goods and Services Tax (GST) and that too, at the median rate.

But this has been kept out of GST and does not seem likely to be brought into its ambit in the foreseeable future.

If it were brought under GST at the highest rate of 28 per cent, the price of petrol and diesel would come down by about 25 per cent.

This would result in a significant reduction in costs for business.

Of course, tax revenues would decline.

Some of the decline could be partially offset by raising the GST rates of other items.

India had lowered tax rates and import duties substantially in the 1990s.

It was able to live with the decline in revenues that resulted, because it had gained through higher GDP growth rates and the tax buoyancy this generated.

In all cases of successful industrialisation, national highways were built by the state and these were not toll roads.

It is not commonly known that in the US, sporadic efforts for over a century to get Congress to approve the building of interstate highways with tolls did not get any traction, as there was a bipartisan consensus that this would be a cost which should not be imposed on business.

The development of toll-based highways by the private sector is a relatively recent policy recommendation for developing countries, and India’s experience with this has been problematic.

The cost of land in India is far too high.

There has been an asset price bubble in land across the country for quite some time.

The return on capital from rents in urban areas, or agricultural production in rural areas, is estimated to be barely 2 per cent, which is well below the cost of capital.

The recent land acquisition Act has pushed up the cost of acquiring land manifold.

Delhi after independence is a good example.

All the refugees who came from Pakistan were given practically free land to live and try to earn a living.

How to achieve this needs greater discussion and focus.

Regulations are necessary, but they impose costs on business.

The challenge is to try and keep the regulatory burden and compliance costs on businesses to the minimum.

The concept of regulatory impact assessment, of weighing the costs against benefits of any new regulation, has been gaining currency internationally.

It has yet to become a factor in decision making by the government and its regulatory agencies in India.

If it did, each time the Securities Exchange Board of India issued a circular creating a new compliance requirement, there should have been an internal regulatory impact assessment document.

Reducing the regulatory burden is a recurring refrain of pro-business governments in the industrialised economies.

One leader imposed the requirement that for one new regulation, two earlier ones had to be scrapped.

The principles of increasing self-certification as well as credible third party certification in lieu of direct inspection by government officials need to gain momentum.

Compliance should improve as the certifier’s business growth would depend on credibility.

Transaction costs would decline, as officials would not have any direct dealings with individual units.

To go further, environment approval for individual units could be dispensed with in industrial parks, by giving environment clearance for the full production capacity of each park.

All of this requires micro-level analysis and incremental decisions, with the aim of reducing the cost to business.

If sustained over time, this would improve competitiveness and create the potential for a much higher growth rate. 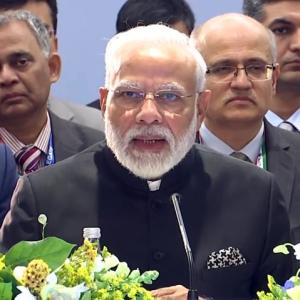