The government must set up a Bank Investment Company to shrink its role in PSBs, if we are serious about tackling the two persistent issues -- lax corporate governance practices and discretionary decision-making, says Shyamal Majumdar.

Everybody’s favourite topic these days is the need to privatise public sector banks (PSBs), especially after the scam at Punjab National Bank (PNB).

Will the government listen to the chorus?

It did not in the past, and is unlikely to do so now, with an election year approaching fast.

The need for doing something on privatisation has been reiterated repeatedly, starting with the Narasimhan panel, which suggested that the weaker banks should be closed down, if they cannot fend for themselves.

Of late, Finance Minister Arun Jaitley has been talking about the need for mergers and consolidation and the latest Economic Survey has gone one step further by recommending privatisation.

Reserve Bank of India deputy governor Viral Acharya has been talking about some “creative solutions” to address the problems of the PSBs.

Some banks, Acharya said, need to be privatised to reduce the amount of capital that the government needs to infuse in them and help maintain fiscal discipline.

He also talked about a consolidation exercise that leads to fewer but healthier banks.

The question is who would buy these toxic banks?

Also, can or will the government bite the bullet when it knows that while advice is never in short supply, it will be an almost impossible thing to make such things politically acceptable?

It is something like the need to amend the Industrial Disputes Act to give freedom to hire and fire.

Everyone says it is something that needs to be done, but no government has had the political courage to do that.

The fundamental point is that India’s PSBs need to be cleaned up and made saleable before the government can think of divesting a large part of its ownership in the restructured banks.

There is no shortage of advice on this score, too -- the latest being the report presented by the P J Nayak Committee, which was set up by the RBI to review governance of bank boards.

Some of the recommendations of the Nayak panel might be difficult to implement politically -- like the one on allowing private equity and sovereign wealth funds to take a controlling stake of up to 40 per cent in banks identified as distressed, or reducing the government’s holding in PSBs to less than 50 per cent.

But the government’s studied silence on some of the other suggestions is baffling as they hold out the promise of a vastly improved governance structure for PSBs.

For example, according to the panel, constraints like dual regulation of PSBs -- by the finance ministry and the RBI, short appointment tenure of the leadership in banks, low compensation, vigilance enforcement and applicability of the Right to Information Act, should be rapidly eliminated or significantly reduced in order to avoid erosion of competitiveness of State-owned banks.

An equally sensible suggestion is a ‘government-as-investor’ model which has been tried out in many countries -- successfully.

For example, the Singapore government controls DBS through Temasek.

The board of DBS is fully empowered so much so that neither the Singapore government nor Temasek have any role in appointment of CEOs.

The UK government controls RBS and Lloyds Bank through the UK Financial Investments, which was set up in the context of the government bailout extended to these two troubled banks after the 2008 financial crisis, and the UK treasury is its sole shareholder.

The boards of both banks are subject to standard corporate law directors’ duties, and fully empowered.

The UKFI is viewed as a buffer between the banks and politicians, and acts as an informed shareholder.

There are more examples.

In each case, the role of government-as-investor is discharged through the construct of an intermediate investment company, seen as beneficial for both profitable and stressed banks.

There is therefore no reason why the government cannot work on the panel’s suggestion of setting up a Bank Investment Company to hold equity stakes in banks, which are presently held by the government.

Instead, what the government has done is to ignore all other suggestions of the Nayak committee, except for the one on the Banks Board Bureau.

But the BBB has been rendered toothless, making a mockery of the spirit in which it was set up.

For example, the BBB has not been given final say on the appointment of the top brass of PSBs as all appointments are still scrutinised by the finance ministry.

In addition, the bureau has been given no role on the resolution of stressed assets, consolidation among the PSBs and their governance.

The PNB scam should be a wake-up call -- the time has come for the government to have an arm’s length relationship as far as governance of PSBs is concerned.

So, set up the BIC to shrink the government’s role in PSBs, if we are serious about tackling the two persistent issues -- lax corporate governance practices and discretionary decision-making. 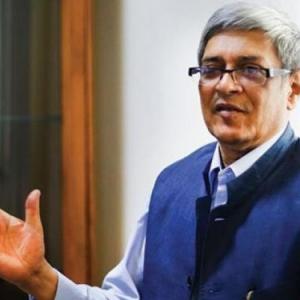 Is there a great deal of trust in the private sector?