'Anyone can string together a few alliterative words, but are they a substitute for serious thought?'
'And do they make for a strategy or plan for coherent action?' asks T N Ninan. 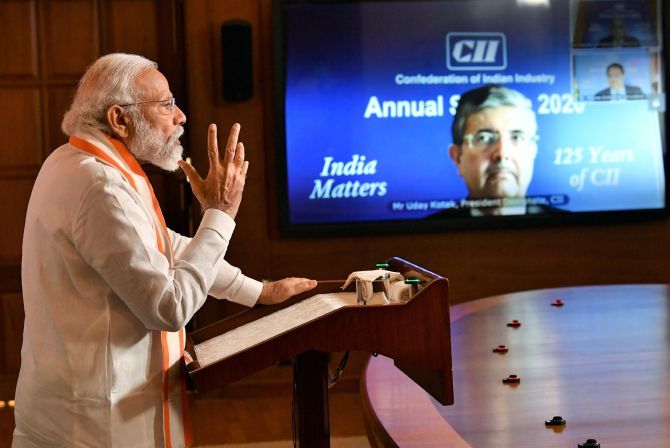 Narendra Modi is back at his alliterative best (or worst).

He told the Confederation of Indian Industry early this month about five 'I's: Intent, Inclusion, Investment, Infrastructure, and Innovation.

Then he told the Indian Chamber of Commerce about three 'P's: People, Planet, Profits.

This harks back to the three 'D's (Democracy, Demography, Demand) and five 'T's (Talent, Tradition, Tourism, Trade, and Technology) of the early Modi years.

We also had, somewhat embarrassingly in the current context, 'INCH to MILES': India-China towards a Millennium of Exceptional Synergy.

Other elements of the current approach to economic revival also hark back to earlier promises.

It should be not command and control but plug and play, Mr Modi says.

That reminds one of Minimum Government, Maximum Governance.

Should one believe in such wordplay, given the experience so far? The political initialisations provoke a laugh (RSVP for Rahul, Sonia, Vadra, and Priyanka!), but the rest stand in danger of getting reduced to a yawn.

Anyone can string together a few alliterative words, but are they a substitute for serious thought?

And do they make for a strategy or plan for coherent action? Can one really make sense of the five 'I's and five 'T's?

The National Institution for Transforming India (NITI) Aayog has become expert at translating such slogans into power-point presentations.

One package of slides was presented as a strategy for double-digit economic growth, and we know where that has led.

It is equally embarrassing to recall another initialisation, EPI (Every Person is Important), while looking at the travails of millions of migrant labourers.

But to be fair and present the positives as well, the Modi government has delivered in different ways on the three Ss (Speed, Skill, and Scale), through highway construction, bank outreach, and other programmes.

To be sure, some of the acronyms or initialisations are simply evocative ways of describing government programmes, like Usttad for Upgrading Skills and Training in Traditional Arts/Crafts for Development, or Uday (Ujjwal Discom Assurance Yojana).

Unfortunately, discom debt is reported to be at a peak, and one doesn't know about Usttad.

The other problem with proliferating acronyms and alliterations is that they make recall difficult, and therefore lose meaning as guides to thought and action.

Does anyone remember SMART, for instance? It apparently stands for a 'Strict and Sensitive, Modern and Mobile, Alert and Accountable, Reliable and Responsive, Techno savvy and Trained' police force!

There is no limit to the things that an ambitious government wants to achieve, but resources are finite.

Or every day would be Christmas, with all the goodies we wish for under the tree.

So how does one prioritise, or choose when there is a conflict implicit in two goals (for example, manufacturing and pollution control)?

People, Planet, and Profits sounds appropriate just now, but if providing for people and the planet eats into profits, can we also ask for ambitious investment?

The prime minister spoke of building into global supply chains, but so far that has yielded precedence to the protection of local kirana stores.

It is also made more difficult by rising tariffs, designed to achieve Make in India.

And if Every Person is Important while unemployment soars, should giving meaning to that slogan force monetary and fiscal policy to make room?

In short, one needs a coherent worldview for a given context, and clearly stated priorities that fit into it like a jigsaw.

If the resources available are x per cent of GDP, how should they be allocated among defence, health and education, and physical infrastructure?

Should direct benefit transfers take precedence over investment for growth?

If resources are shrinking along with the economy, should one indulge in expansive homilies, or hunker down as the defence brass are at last doing?

No more dream-world talk, for instance, of a third aircraft carrier.

We need to go further down this road.

How about giving up on expressway projects that cost about Rs 100 crore per kilometre, and build hospitals instead at between Rs 50 lakh and Rs 1 crore per bed?

Alliteration does not obviate such choices.