News
Business
Movies
Sports
Cricket
Get Ahead
Money Tips
Shopping
Sign in  |  Create a Rediffmail account
Rediff.com  » Business » Why the fuss over BS-IV vehicles is quite meaningless

The fact is that BS-IV vehicles, particularly diesel trucks, are much less polluting than BS-III ones, says Sunita Narain. 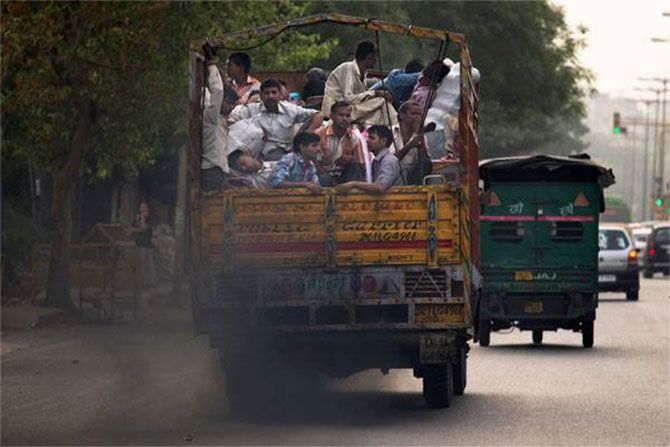 Why this huge fuss? I am talking about the automobile manufacturers’ insistence that great injustice has been done to them because they have been asked to move to Bharat Stage-IV (BS-IV) technologies for emission control before the due date.

The government notification, which they are using in their defence, says that companies would stop manufacturing Bharat Stage-III (BS-III) vehicles by March 31, 2017. The companies say that this does not mean that registering BS-III vehicles would be stopped as of April 1, 2017.

Automobile companies, ably represented by their association, Society of Indian Automobile Manufacturers (SIAM), says this decision to stop sale means that there are huge inventories that have been piled up; and so, huge losses for them and for the country. This is injustice.

I ask this because I was involved with this decision - first taken by the Environment Pollution (Control and Prevention) Authority for the NCR (EPCA) and then by the amicus in the air pollution case, Harish Salve, and then finally directed by the Supreme Court. I write this both to explain my position and also ask the question, once again, humbly, why the fuss?

Let’s understand the issue at stake. First, vehicles contribute to the toxic pollution, which is choking our lungs and making us ill.

Second, improving the quality of fuel and vehicle technology is a critical way to clean up emissions.

But third, this improvement in fuel quality and technology has always been hard fought and adversarial. It has always come in spite of Indian automobile companies and not because of them.

It was in April 1999 that the Supreme Court, also then listening to the matter on air quality in Delhi, had directed that all vehicles in India would have to meet Euro I (BS norms were not fashioned then) by June of the same year. It also directed that Euro II would be mandatory in the National Capital Region (NCR) by April 1, 2000.

The precedent set then was its direction that “no vehicle shall be registered unless in conforms to Euro II norms”.

The telling one-liners from the apex court’s top Bench of that time should remind us of today. In May 1999, at the hearing on this matter, counsel for automobile companies argued for more time to implement the Euro norms.

The Bench remarked in obvious sarcasm, “People can’t breathe and you are asking for more breathing time?” The transition happened in Delhi and the NCR, as directed by the court. There were front-end companies, which pushed for technology improvement and the laggards caught up.

The 2008 notification said Delhi, the NCR and 12 cities would get BS-IV by 2010. And in 2015, the road map for the rest of the country was decided — fuel would be progressively available and technology transition would happen.

The final deadline was April 1, 2017, when the entire country (barring very small remote pockets) would be covered with this 50 ppm sulphur fuel as compared to 350 ppm available till then.

So, the fact is, the automobile companies knew well in advance that the fuel would be available across the country by April 1, 2017.

The transition to BS-IV is also not new as technologies have been available since 2010, when Delhi and other cities moved to these standards.

The technical date of ‘manufacture’ is then only technical, as fuel and technology are both available. The only constraint of clean fuel being available nationwide - needed for long-distance carriers like taxis and trucks - has been removed. The transition should have been seamless.

But it was not. This is my fourth point. The fact is that the EPCA, of which I am a member, had convened a meeting in October 2016 to discuss this switch date. Our position was that as clean fuel would be available by April 1, 2017, at considerable cost to the public exchequer, companies should plan their inventories accordingly.

The objective was to ask them to reduce the production of BS-III vehicles and to start ramping up the manufacture of BS-IV vehicles so that stocks with dealers were ready for sale by April.

But instead, the data supplied by the companies to the Supreme Court show that most of them - makers of commercial vehicles, three-wheelers and two-wheelers - continued to produce BS-III vehicles at the same or even an increased rate in the subsequent months - in fact, all the way till end February in most cases.

This then built up inventories - over 90,000 commercial vehicles would be unsold, said industry. So, whose fault is this?

The fifth issue is that this transition matters. The fact is that BS-IV vehicles, particularly diesel trucks, are much less polluting than BS-III ones. There is 80 per cent reduction in particulate emissions between the two generations. So, bringing cleaner vehicles into the market as fast as possible matters.

There is no doubt that the country has a massive problem of older and more polluting vehicles. But why should this be an argument for delaying the transition to new ones? After all, vehicles have a life of 10-15 years - the faster the new stock takes over the better it is. How can there be any argument on this? Tell me? Please.