Why China needs BRICS for the time being

The BRICS states need to pin down China on long-term norm-based values, ideas and concrete proposals and programmes for the mutual benefit of the constituent member states, writes Srikanth Kondapalli.

Today's summit meeting of the Brazil-Russia-India-China-South Africa multilateral grouping at New Delhi suggests to its transition from a "talk-shop" institution, to that of laying down concrete plans for changes in global power matrix, specifically in the economic field. 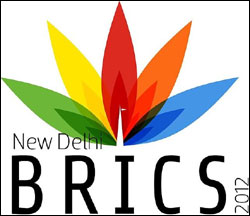 When United States Secretary of State Hillary Clinton mentioned that the US should learn from the BRICS' economic rise, it is an endorsement of the coordination of the BRICS in the international relations as well as in economic development.

Although there are acute differences between the BRICS states on market-economy status, investments, reform of the UNSC membership, democracy, etc., the grouping is expected to enhance its prestige in the coming years as the globe is witnessing major changes in power re-distribution.

The New Delhi Declaration of the BRICS highlighted the need for global economic recovery and the steps needed to be undertaken in this regard, including "adopting responsible macroeconomic and financial policies" by the West; IMF quota reforms; increase the lending capacity of the IMF; leadership of the World Bank coming from developing countries; creation of a South-South Development Fund, etc.

However, the Declaration was silent on the explicit endorsement of UN Security Council membership to Brazil, South Africa and India and indicates to China's reservations in this regard.

Indeed, of all the constituents of the BRICS, the role of China has been highlighted as a major beneficiary of this multilateral process. China is the 2nd largest economy in the world with nearly $6 trillion in GDP.

However, its level of economic development is uneven, with income inequalities between rural and urban incomes reaching highest levels for any country in 2011 to nearly 0.52 on the Gino-coefficient measure. China also witnessed, as a consequence about 180,000 "mass protests" in 2010 - and rising.

China has accumulated more than $3.2 trillion in foreign exchange reserves - most of it invested in the US Treasury Securities (about $1.2 trillion) and in euro. China invested nearly $250 billion in raw materials and energy resources, specifically in Asia, Africa and South America.

However, it has been reluctant to invest in the industrialisation of the other BRICS states so far. While China pledged to invest in the Chiang Mai 1997 initiative of Asian Monetary Fund, no major funds were allocated by Beijing. It needs to be seen how much China will pledge in the South-South Development Fund suggested at this New Delhi meeting.

While all the other BRICS states are, to varying degrees, democratic in political systems, China has an authoritarian system at home, with rising political aspirations of Chinese.

Although China has suggested that the international system (for instance the UNSC) should be democratized, no explicit or concrete measures were undertaken by China to democratize reform and reorganize the system, either internationally or domestically.

All the above points raise the question of China's role in the BRICS phenomenon on its motivations, objectives, interests and how far it can go to stick with the BRICS and support other members in the international system. China (and Russia) had been new to the multilateral process which suggest to pooling of sovereignties, interests and adjustments by three or more countries.

China initially emphasised on bilateral relations in the 1950s and 1960s. After the reform programme was initiated in 1978, China faced the dilemma of adjusting to the international regimes. Last two decades, specifically after joining the WTO in 2001 China re-adjusted its policies. This is reflected in the mild response of China in the Doha round of talks in comparison to the vociferous stance of Brazil, India and South Africa.

Also, China's relations with the US are factored by Beijing for larger gains in terms of investments, high technology and markets in the West.  In the backdrop of the Group 2 (i.e. between US and China) coordination of international and regional security and economic situation as suggested by Brzezinski, China's position in multilateral institutions is quite evident. China had not explicitly opposed the US policies.

Instead, while remaining in the sidelines, Beijing supported Russia, Germany and France in the Second Gulf War in 2003 or on other security and economic issues. Multilateralism then comes in handy for Beijing to shield itself for the time being till its comprehensive national strength surpasses that of the US and power transition at the global levels take place in Beijing's favour. Hence China needs BRICS for the time being.

While China suggests that it sticks to multilateralism, it is not clear if this is a long-term policy or for a short term co-existence. The BRICS states need to pin down China on long-term norm-based values, ideas and concrete proposals and programmes for the mutual benefit of the constituent member states.