If we are to maintain stable societies and productive lives, we can no longer sustain a widening budget gap between what nature is able to provide and how much our infrastructure, economies and lifestyles require.

India's further decline in the annual Global Competitiveness Report (GCR) will be cause for still more gloom in business circles. This year's report shows that India has fallen by three ranks and now stands at 59th position while Switzerland, Singapore, Finland, Sweden and Netherlands are the top five nations. 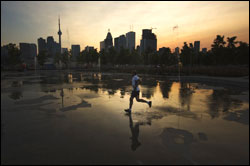 The GCR, which is released every year by the World Economic Forum, confirms that the Indian economy is being stymied by inflation, policy instability, corruption, inadequate infrastructure, poor public health, difficulty in access to finance and more.

For those who are actually running a business, or just living and working in India, these are all critical problems that need to be solved urgently. But it is equally vital to note that the GCR is completely blind to the ecological dimension of life. In all published reports listing the criteria used by the GCR there is no mention of a country's burden on the environment or the actual well-being of its people.

This year August 22nd was Earth Overshoot Day, namely the date on which humanity exhausted nature's budget for the year. According to the Global Footprint Network, which tracks data on mankind's collective ecological footprint, this means that for the rest of the year our species is living in deficit by over-exploiting natural resources and spewing more carbon than the atmosphere can process.

So while most attention is focused on comparing which country stands where in conventional business competitiveness  it might be more instructive to compare how the same countries fare on the Happy Planet Index, compiled by the London based think-tank New Ecnomics Foundation. The HPI survey is essentially seeking answers to this basic question: 'how much well-being is achieved per unit of resource consumption?'

India has been placed at 59th position by the GCR and at 32nd place by the HPI.

The HPI index is calculated by using global Gallup Poll data on experienced levels of well-being in each country, multiplying that with the life expectancy and then dividing that sum by the country's ecological footprint.

While media report have quickly thus dubbed Costa Rica as the happiest place in the world, that is not quite true. On a pure well-being index Denmark stands much higher than Costa Rica but its HPI score rank is at 110 position because of its much larger ecological footprint.

Costa Rica's number one ranking on HPI is largely a consequence of various national policies which have made it more competitive on sustainability. For instance, according to the HPI report, Costa Rica produces 99% of its energy from renewable sources, has managed to reverse deforestation and has set a target to be carbon neutral by 2021. And yet, Costa Rica is still using more than its fair share of planetary resources.

Skeptics may be inclined to suspect that the HPI is a way of romanticizing poverty or at least lack of affluence. But if that were the case Nigeria would not feature at a low 125th position, out of the 151 countries covered by the HPI. This is despite Nigeria being ranked in the 42nd position on the ecological footprint ranking. Its HPI score ranking is pulled down by extremely low life expectancy and even lower level of experienced well-being.

So how is 'experienced well-being' assessed? This year the HPI used a question called the 'Ladder of Life' from the Gallup World Poll. Respondents are asked to imagine a ladder, where 0 represents the worst possible life and 10 the best possible life, and say where they feel they currently stand on this ladder.

For its life expectancy data the HPI depends on the UNDP Human Development Report. Its Ecological Footprint data comes from the environmental NGO WWF and reflects 'the per capita measure of the amount of land required to sustain a country's consumption patterns, measured in terms of global hectares (g ha) which represent a hectare of land with average productive biocapacity'.

Dr Mathis Wackernagel, President of the Global Footprint Network, brings the exercise into perspective in rather practical terms. 'Nations around the world, and particularly in the south of Europe, have started to painfully experience what it means to spend more money than what they earn," says Dr Wackernagel, 'The resource pressure is similar to such financial overspending, and can become devastating. As resource deficits get larger, and resource prices remain high, the costs to nations become unbearable.'

'From soaring fossil fuel prices to crippling national debts partly due to rising natural resource prices, our economies are now confronting the reality of years of spending beyond our means," Dr Wackernagel adds. 'If we are to maintain stable societies and productive lives, we can no longer sustain a widening budget gap between what nature is able to provide and how much our infrastructure, economies and lifestyles require.'

So conventional business and economic-climate competitiveness between nations is important. But a measure like GCR is only giving us a score that has very short term relevance and does not reflect a broader view of reality.