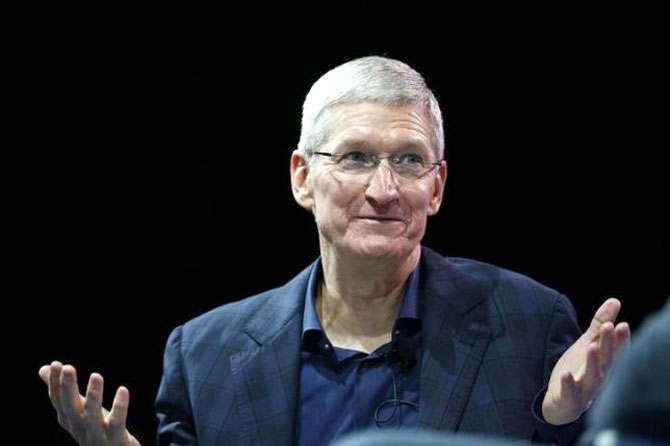 The four-day visit to India of Tim Cook, the chief executive of Apple Inc, turned out to be quite an exceptional charm offensive.

He visited a temple, witnessed a cricket match and even fraternised with film stars, other than of course meeting the prime minister.

Apple is one of the last global technology companies to seriously look at India.

It has started a technology development centre in Hyderabad which could employ 4,000 people -- when other global technology players, from IBM to Amazon, already employ 250,000.

Sales of Apple's smartphones in China have suffered a setback, producing a downturn in the firm's latest financial results.

On the other hand, the size of the Indian market, its growth potential and relatively low penetration of iPhones make India the obvious place for Apple to turn to, in order to keep growing globally.

A significant undeclared battle is raging between China and the US over technology related security in which the Chinese government cannot afford to lose if it wishes to ensure its continued, extensive vigilance over its own people.

China is dictating terms to Apple and other global technology companies for two reasons.

It wants significant investment in its technology sector so that Chinese technology can keep growing in its quest to challenge US superiority.

Mr Cook has just come from a China visit, and has already announced a $1-billion investment in a firm that rivals Uber -- after China suspended some of his company's entertainment services. (Apple is yet to make any firm investment announcement for India.)

What is more, the Chinese have floated legislation which wants foreign technology companies to share their source codes and encryption keys so that it can make sure that these companies are not cooperating with US security agencies with insights gained in China.

While Apple is unlikely to give in on encryption and offer a backdoor (it has refused this to the US government), it may have already shared its source codes, according to experts.

This creates an opportunity for India.

If, because of pressure from Apple, India takes more steps to further improve the ease of doing business in the country then that is good for everybody, Indian or foreign.

The government should listen closely to what the world's most valuable company has to say about what it would take to start up manufacturing in India -- such as improving skill development, building infrastructure and making software and manufacturing hubs more liveable and better connected.

That would help the prime minister's Make in India mission -- which has unfortunately begun getting bogged down in pointless protectionist impulses like a proposed ban on importing refurbished phones, another issue Mr Cook no doubt took up with Mr Modi.

Keeping an eye on what Apple is doing in China would also serve as a reality check for India on its actual status in the global pecking order - and also allow it to plan properly for the future.