Bangladesh might overtake India this year by per capita income in nominal dollars, but it is not yet close to becoming South Asia's economic powerhouse anytime soon, T N Ninan points out. 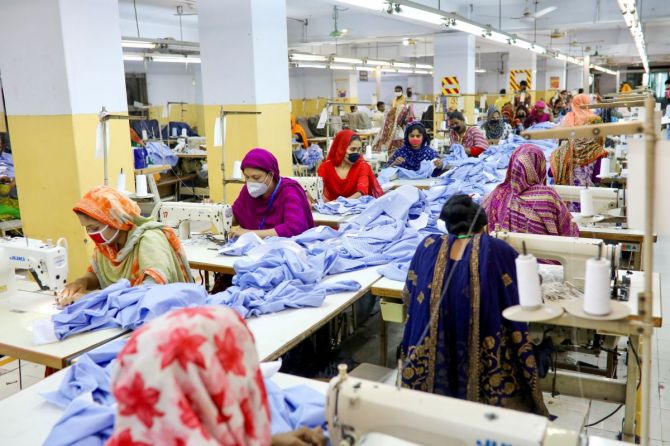 The country of the moment is the one that exports 'termites': Bangladesh.

On the first of my two visits to that country, in the mid-1990s, the only direct flight from Delhi to Dhaka was one that Biman Bangladesh Airlines originated from London.

In business class, one confronted a toilet that was locked.

'Reserved for VIPs', said the plastic panel pasted on the door! Non-VIPs in business class had to use toilets further back in the plane.

The city had two good hotels and was over-run with cycle-rickshaws, while the cars were dated Japanese models.

They were cheap because Japan's rules mandated an expensive overhaul of any car beyond its initial life, and many owners preferred to trade in for new vehicles instead.

The 'pre-owned' ones were exported, without the cost of overhaul, to poor countries in Asia.

There was a sprinkling of Indian businessmen who had set up garment businesses, importing raw materials from India and using Bangladesh's export quotas to sell to Europe and elsewhere.

The ubiquitous presence was of foreign-funded NGOs, while the macro-economic story was like India's on reforms.

The finance minister, Saifur Rehman, whom one met in the eye-catching but grimly modernist assembly buildings designed by Louis Kahn, was a Manmohan Singh-style reformer (they were born in the same year, in a few days of each other, and held office co-terminously as finance minister).

Rehman, under Khaleda Zia, had launched a more convincing privatisation programme than India's reluctant 'disinvestment' push, and the country was doing quite well on many parameters, except growth -- where India outpaced it.

Travelling around the countryside, one found that the railway system was as decrepit as India's, while the roads coming in from the border with India had a stream of trucks carrying cattle -- presumably for slaughter.

The newspaper and magazine stalls were full of Bengali publications from India, but the country's national day celebrations found virtually no mention of the Indian Army's role in getting the country its freedom -- which irritated India's diplomats.

Bilateral trade was hopelessly one-sided in India's favour, but India's trade negotiators would yield no ground.

Still, one left with the impression of a country that was taking the first steps to getting somewhere.

Amartya Sen was one of the early birds to catch on that Bangladesh had started doing better than India on the health metrics, but on years of schooling India has continued to do slightly better.

Bangladesh's population growth would have been somewhat faster without the steady outmigration to India's border districts.

Bangladesh's performance on the social indicators was notable because its per capita income (measured using purchasing power parity) was barely half India's at the time.

It has improved sharply to 80 per cent while, as the IMF's latest forecast says, its per capita income in nominal dollars is expected to move fractionally ahead of India this year.

Ever prescient, Shankar Acharya had predicted this a few years ago.

It seemed quite a distant prospect, given India's steady growth clip at the time.

But India has slowed while Bangladesh accelerated till Covid struck the two countries differentially and closed the gap.

Crucially, the taka has gained a third in value against the rupee since the onset of the 2008 financial crisis.

That boosts Bangladesh's GDP in dollar terms, which is what the IMF tracks.

As with India, merchandise imports are about 50 per cent bigger than exports, but in relative terms Bangladesh benefits from much higher remittance inflows (close to 6 per cent of GDP, double India's number).

So don't bet just yet on Bangladesh as South Asia's economic champion, unless you believe that India will continue to under-perform.