Protectionism and a rollback of regulation.
Defusion of tensions with Russia and a lowering of geo-political risks.
Looser fiscal policy and tighter monetary policy.
At least Donald Trump can't be faulted for not trying something different where existing policies have disappointed, says T T Ram Mohan. 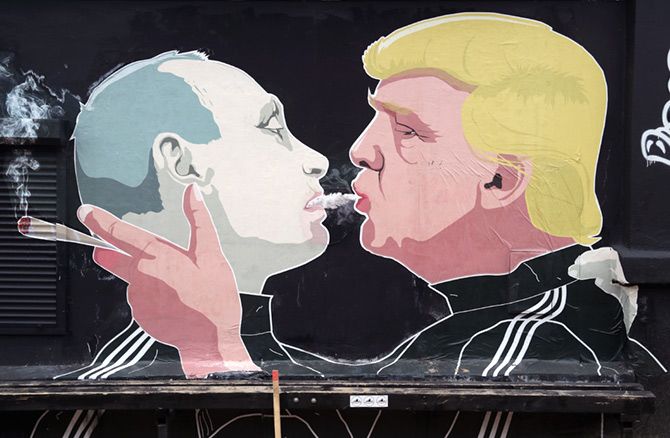 IMAGE: Though many have expressed concerns over US President-elect Donald Trump's admiration of Russian President Vladimir Putin, seen left in this poster, T RT Ram Mohan believes the potentially biggest positive of a Trump presidency arises from his resolve to rewrite US foreign policy.
Photograph: Sean Gallup/Getty Images.

In early November, a group of 370 economists, including eight Nobel Laureates, signed a letter that called Donald Trump a 'dangerous, destructive choice for the country.'

As the stock markets plunged ahead of Trump's victory in the US presidential polls, Paul Krugman wrote, 'If the question is when markets will recover, a first-pass answer is never... we are very probably looking at a global recession, with no end in sight.'

Krugman has already been proved wrong in respect of his first forecast. Following Trump's victory, the Dow Jones Industrial Average recorded its best weekly performance since 2011 and the S&P 500 its best since 2013.

Krugman -- and many others in the economics fraternity -- could be proved wrong on his second forecast as well. The pundits, who failed to grasp the scale of Trump's electoral appeal, may turn out to have been prejudiced in respect of his economic agenda, too.

His detractors have focused resolutely on his anti-globalisation stance while ignoring significant positives.

The potentially biggest positive is not even part of his economic agenda. It arises from his resolve to rewrite US foreign policy: A reduction in geo-political risks and its economic benefits if he is able to follow through on his proposed rapprochement with Russia.

Trump's campaign promise to change the rules on trade and immigration is a legitimate cause for worry.

He has threatened to withdraw from trade agreements and to scrap ones under discussion.

He has said he will raise tariffs steeply on Chinese and Mexican imports.

He wants to impose tariffs on American companies that relocate jobs overseas.

He has also said he will deport illegal immigrants and clamp down on H1-B visas.

Trump cannot be expected to backtrack entirely on these promises -- he has to meet the expectations of his core constituency. But his campaign rhetoric need not translate fully into action.

American presidents don't have a free hand on trade matters; they need to work closely with Congress. The general reckoning now is that pragmatism will prevail.

Tariffs on Chinese imports may be raised, for instance, but not to 45% as threatened. Some increases may be introduced as anti-dumping duties.

Warren Buffett thinks higher tariffs are a bad idea, but 'I'm not going to say it will cause a recession.'

Another big area of concern is the promised rollback of regulation.

Trump thinks that the thicket of regulations created in recent years is killing American business. He has said he will dismantle the Dodd-Frank Act, enacted after the financial crisis.

It's one thing to substitute Dodd-Frank with simpler and more effective regulations as serious economists have urged.

It's quite another not to regulate the financial sector at all -- that's sure to bring on another financial crisis. IMAGE: US President-elect Donald Trump tours the Carrier factory in Indianapolis, Indiana, December 1.
Though Trump supporters have praised him for working out a deal to keep jobs at this manufacturing plant from being moved to Mexico, many have pointed out why this was actually a blunder.
Photograph: Mike Segar/Reuters

Turn now to the positives in Trump's agenda.

These would amount to the most ambitious fiscal expansion in the US in years.

And fiscal expansion is just what the doctors -- Larry Summers, Krugman, the International Monetary Fund, the Economist and several others -- have ordered.

They have all argued that monetary policy can only take us thus far. Low and negative interest rates have failed to deliver growth even as they have increased the risk of financial instability.

Fiscal policy will come into its own; it will happen with a vengeance with Trump as president.

Increased government spending and tax cuts together are inflationary. That would give the Fed the opportunity to raise interest rates -- just what it's been looking to do.

Higher rates will position the Fed to respond to a future recession with a cut in rates rather than through unconventional policies such as Quantitative Easing (QE).

QE was intended strictly as a response to the extraordinary financial crisis of 2007, it wasn't meant to last this long.

Many will carp about the increase in government debt on account of fiscal expansion. But we do know that there's no better way to lower the debt to GDP ratio than to have strong growth.

Trump is a seasoned businessman. He thinks a cut in corporate tax rates will induce US businesses, who have stashed away trillions abroad, to bring these home.

He intends to charge a one-time 10% repatriation fee on profits that are brought back.

It's Trump's approach to foreign policy that promises some of the biggest rewards for the world economy.

Trump is, perhaps, the first US president since World War II to view Russia as a partner rather than an adversary.

He has questioned the need for NATO.

He has promised to work closely with Vladimir Putin in dealing with the Islamic State in Syria.

A heightening of geo-political risks is the last thing we need at the moment.

Trump's critics lament the possible demise of the liberal economic order. They seem strangely unconcerned about the steady erosion of the international political order that has underwritten global growth and prosperity since World War II.

If they see any merit at all in Trump's proposed reset of foreign policy, they are not showing it.

Protectionism and a rollback of regulation.

Defusion of tensions with Russia and a lowering of geo-political risks.

Trump's agenda might not be more attractive, but it falls well short of being a disaster.

At least he can't be faulted for not trying something different where the existing policies have disappointed.