Perhaps half-way through India’s demographic transition, what is the outlook for the future?

Robert Malthus wrote his famous An Essay on the Principle of Population in 1798. In that book his basic thesis was that population growth would likely swamp increases in production (mainly food) so that mankind would remain trapped at low standards of living, held back by hunger, famine and disease.

In different forms the spectre of the “Malthusian Trap” held sway over the 19th century and much of the 20th (remember Paul Ehrlich’s dire warnings in his The Population Bomb in 1968?).

In fact, of course, these same two centuries witnessed unprecedented advances in science and technology across all fields, which enabled manifold increases in the standard of living, first in today’s industrial countries and, after 1950, in much of the developing world.

By the end of the 20th century, Malthusian anxieties had been largely allayed by rapid technical progress, global economic integration and a much better understanding of the demographic transition that typically accompanied economic and social development.

The modern view is that population (and the associated labour force) is usually a major potential asset for a country’s economic growth. Indeed, rich countries (such as European nations and Japan) increasingly worry that their stabilised populations, declining working age cohorts and the rising “burden” of high longevity retirees have become significant constraints to further economic growth.

In India, too, the initial neo-Malthusian concerns seemed to fade as the new view gained traction. By the early years of the 21st century, domestic and foreign economists were waxing eloquent about India’s enormous growth potential from her burgeoning young labour force and falling dependency ratios (as fertility rates declined). This was the much-touted “demographic dividend”.

As I warned 13 years ago, “the ‘demo-div’ is all about the ‘supply’ of labour. Nothing is said about ‘demand’. The additional labour supply offers the potential for employment and growth. In a well-functioning economy with competitive product and factor markets, labour demand would match supply and lead to more jobs and output. But there is no guarantee of such a happy outcome…”

As we now know, between 2003/4 and 2011/12 the Indian economy grew at eight per cent plus. But the jobs situation did not improve commensurately. In particular, organised sector employment grew little, remaining stunted at below 15 per cent of total employment by some measures and below 10 per cent by others. And once economic growth slowed after 2011/12, the patchy data available suggests that the employment situation got worse.

This disappointing performance was due to several factors, including, notably, India’s extraordinarily complex and rigid labour laws (which were severely tightened during Indira Gandhi’s rule) and poor education and skill-development policies in most states.

Furthermore, the article cited above went on to note that because of varying degrees of progress in the demographic transition across Indian states, the bulk of India’s demographic dividend would be focused in a handful of “populous, poor, slow-growing northern states with weak infrastructure, education systems and governance. The chances of translating this potential of additional labour supply into a reality of employment and high growth appear to be slim”. 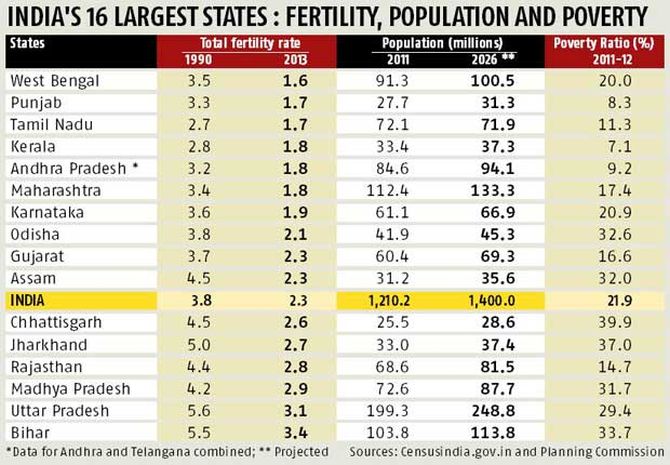 Actually, with the exception of 200 million strong Uttar Pradesh and Jharkhand, growth in these states (notably Bihar, Madhya Pradesh and Rajasthan) was pretty good (higher than for India as a whole) up to 2013. But job creation remained weak. And, perhaps for that reason, poverty rates remained high in all these states except Rajasthan (see table above).

Now, perhaps half-way through India’s demographic transition, what is the outlook for the future? The table provides some pertinent data for the 16 most populous Indian states. The first (and most heartening) point is the remarkable declines in total fertility rates across all these states between 1990 and 2013.

If we follow the standard convention of taking 2.1 as the replacement rate to stabilise populations, not a single state was anywhere near that benchmark in 1990. Even Tamil Nadu and Kerala were at 2.7 and 2.8, respectively, while the poorest and most populous states (Uttar Pradesh and Bihar) had double these rates of fertility.

By 2013, fertility in half these states had dropped below the replacement rate and in another two (Assam and Gujarat) was very close. The remaining six states, which had fertility rates significantly above the replacement rate, are essentially successor states of the original (pre-2000) BIMARU states of Bihar, Madhya Pradesh, Rajasthan and Uttar Pradesh.

While the other 10 states had fertility rates at or below the all-India average of 2.3, these six had higher rates.

Second, more worrisome, half the increment in population of 190 million expected in the 15 years between 2011 and 2026 will occur in these six poor, high fertility, landlocked states with weak infrastructure, education systems and, arguably, governance. As in 2003, the anxiety about translating this increment in population and labour supply into productive employment and growth remains strong.

In some ways the concern is stronger now for four important reasons.

First, it is unlikely that the high growth spurt of 2003/4-2011/12 will be repeated in the next 15 years, given the weak condition of the global economy and the deglobalisation forces that seem to have been at work in recent years.

Second, despite the current government’s significantly stronger focus on promoting labour-intensive manufacturing, external market opportunities seem to be waning thanks to the spate of labour-saving technical progress that is sweeping through advanced economies. These include, mass production of robots, cheap sensors, the internet-of-things, 3-D printing, artificial intelligence applications and so forth.

Third, even existing jobs may be at serious risk: According to a recent speech by the World Bank President Jim Yong Kim: “Research based on World bank data has predicted that the proportion of jobs threatened by automation is 69 per cent in India…”

Fourth, in the increasingly knowledge-based labour market, many studies have pointed to the woeful failings of India’s education and training systems at all levels.

Perhaps Malthusian worries are not misplaced for India’s heartland.

The writer is Honorary Professor at ICRIER and former Chief Economic Adviser to the Government of India.