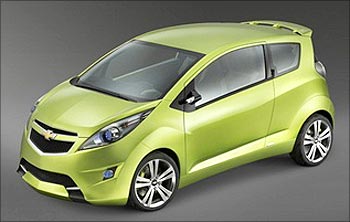 Eyeing the volume segment in India, big car makers, including Honda, Toyota and Volkswagen, on Tuesday showcased their small cars here on the first day of the week-long 10th Auto Expo.

While the compact cars were the cynosure of all eyes, green technology also made a strong presence with many companies showcasing hybrids and alternate fuel vehicles.

Most of the companies are eyeing to garner a sizeable chunk in the Indian car market which is heading towards the milestone of two million units a year.

German car-maker Volkswagen unveiled its much-awaited hatchback Polo which will be pitted against the likes Honda Jazz and Hyundai i20. Polo will hit the roads March this year.

On the other hand, Tata Motors [Get Quote] unveiled its crossover vehicle Aria, passenger carrier Magic Iris and another MPV Venture.

On the green technology front, Toyota unveiled its world's best selling hybrid Prius, which will make its way to India by March this year. It also launched CNG version of its luxury sedan Corolla Altis.

Honda showcased its hybrid concept CZR, while Maruti Suzuki displayed the hybrid SX4, which will be used at the Commonwealth Games in October.

Mercedes showcased its concept car along with its sedan SLS AMG Desert Gold that will be priced over Rs 2 crore (Rs 20 million), when launched in India. The company did not disclose the timeframe for bringing the car in India.