The Congress party has slammed the United Progressive Alliance government over inflation saying that the inability of the government to deal with this issue can undo the hard work of Sonia Gandhi over the last one decade. 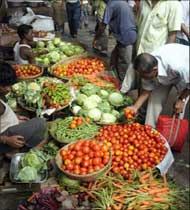 The Congress has also asked the prime minister's office to co-ordinate better with various ministries over the issue of inflation, in what is being seen as a clear reference to the activities of its ally Union Agriculture Minister Sharad Pawar of Nationalist Congress Party.

In what is being seen as one of the toughest criticisms of the government led by Manmohan Singh since the Congress-led government came to power, the party's mouthpiece 'Congress Sandesh' has come down hard on the government's handling of inflation.

The editorial in the latest issue of 'Sandesh' says that "even a small issue can negate the good work of a lifetime and carelessness in dealing with issues directly related to human feelings always cost dearly."

A senior leader gave the example of sugar to prove how both the party and the people were being taken for a ride and the result was excessive high prices.

Sources say that in the case of sugar, there appears to have been an understanding between the agriculture and commerce ministriess with the Commerce Minister Anand Sharma giving the go ahead for the export of sugar, even as there is a huge sugar crisis in the country and the agriculture minister importing sugar at much higher rates. It must be remembered that Anand Sharma is an old Sharad Pawar protege.

It is interesting, say, party leaders that as recently as February 15, the Director General Foreign Trade, on instructions of Anand Sharma, notified that 10,000 metric tones of processed sugar was being exported to the European Union even as there is an approximately 280,000 tonnes of actual sugar shortage in the market.

The export notification was however cancelled on Tuesday by the government after the opposition created a big furore over it in Parliament.

It is interesting that just some months back, 20 million tones of raw sugar was imported by the agriculture ministry and this is not the first time that this was done.

A senior government official said that the issue of whether there was a nexus between Pawar and Sharma was being investigated at the highest level, in what is being cited as just one example of how the prices of essential commodities are being manipulated.

Congress sources say the fact that Pawar is an ally cannot be put forward as an excuse by the prime minister.