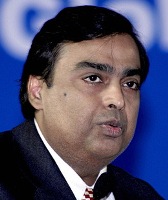 Aiming to set a 'personal example' of moderation in executive salaries, Reliance Industries [Get Quote] said on Thursday its chief Mukesh Ambani has decided to lower his pay package by nearly two-thirds to Rs 15 crore (Rs 150 million) for 2008-09.

At the same time, India's most valued corporate house also announced a new structure for salaries and remuneration of top executives wherein the pay packets would be capped, as against the prevailing system of commission linked to profits.

As a result of scaling down of his package from over Rs 44 crore (Rs 440 million) in 2007-08 to Rs 15 crore (Rs 150 million), Mukesh Ambani would get a lot less than many other industrialists and executives heading companies with a size less than one-tenth of RIL.

The development comes amid debate on whether or not there should be regulation on salaries of CEOs following suggestions by corporate affairs minister Salman Khursheed. The minister had, however, felt that boards and shareholders should decide the packages.

The compensation for the RIL chairman and managing director for the latest fiscal is down 66 per cent from over Rs 44 crore (Rs 440 million) in the previous year 2007-08 and is 98 per cent below the limit of five per cent of the net profit of the company, as per the Companies Act, RIL said.