Get latest news on your desktop
Act now, before Mumbai, Kolkata drown!
Vikram Sood and Nandita Sood-Perret November 30, 2009
In India, there is a perception that the current ecological disaster is a responsibility of the developed world. If we want to play in the big league we must stop seeing ecological solutions as impositions, say Vikram Sood and Nandita Sood-Perret. 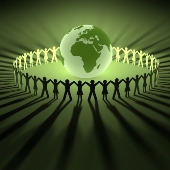 The world's leaders will be meeting in Copenhagen in a few days in what was to be a global effort to save the planet from auto destruct.

It now seems that apart from a few grand declarations, the world will have to wait a while before all our collective fears, prejudices, vested interests portrayed as national interests, complacencies or even denials are fully addressed. The Kyoto Protocol may be dying but the Copenhagen Protocol may be stillborn.

Instead, the entire process has become one of a pretext for protectionist policies under a green label as Prime Minister Manmohan Singh warned in Port of Spain.

"The global discourse on climate change has become enmeshed with arguments about maintaining economic competitiveness or level playing fields," he said. India is willing to make emission cuts and limit the rise of global temperatures, he added, only if there are tangible, equitable commitments on technology, finance and adaptation.

We have all heard the warnings -- Greenhouse Gases, Global Warming -- the terms have come to seem rhetorical. This indifference might be explained by the fact that most of us share a misplaced assumption -- that the planet earth is so big that we cannot possibly have any negative and lasting effect on it.

Doubts about whether or not the earth is actually warming up are very often created by the media and industry. The unwillingness to face facts is explained in the title of Al Gore's famous documentary -- An Inconvenient Truth.

In a span of just 100 years mankind has managed to change its climate. The escape of excess solar radiation is less efficient today than it was a 100 or even 20 years ago -- and this because of the thickening effect that greenhouse gases have on the earth's atmosphere, thus causing global warming. The impending truth is frightening.

The Himalayan glaciers feed rivers that provide fresh water to over 2 billion people. If the current rate of global warming is left unchecked, some predictions go as far as to say that the Brahmaputra, a river whose volume is 100 times that some of Europe's larger rivers such as the Seine and the Tiber, may be seasonal by the second half of the 21st century.

From a situation of excess water that we see in the Brahmaputra basin every year as the rains come down we will then be faced with immense fresh water shortages.

Add to this the so-far-unconfirmed, but possible, stories of the Chinese diverting water from the Brahmaputra to their water scarce north, and we have a major crisis. In a country where provinces fight over water and in a region where countries perennially quarrel over river waters, there could be water wars.

Winters are becoming shorter and milder. Shorter winters mean lighter snowfalls and the ice on the glaciers will not be replaced. This will in turn have devastating effects on agriculture and energy production from dams will also suffer.

Glaciers from the Swiss and Italian Alps, to those of Argentina and Peru have all been receding in this century are now doing so at an accelerated pace.

The Glacier National Park in the United States may soon have to look for another name. Initially melting glaciers will cause an excess of water and therefore flooding. This is not a problem particular to Asia.

These catastrophic floods have already been observed in France in 1999, in Central Europe in 2002 and 2005 and the South American Andes seem ready to follow the trend.

Another vicious cycle is spinning in the Arctic. Ice is one of the best reflectors of solar radiation -- it has a 'mirror effect' on the sun's rays but water absorbs; so as the ice recedes there is greater area to absorb the heat.

Scientists say that this phenomenon means that an increase in temperature of only 0.7 degrees elsewhere on the planet can mean an increase of between 3 and 5 degree Centigrade in the Arctic.

The University of Alaska has documented that the ice floes of the Arctic have melted by as much as 27 per cent between 1982 and 2004.

For instance, if the permafrost in Siberia were to melt, it would lead to the release of naturally occuring methane, a greenhouse gas that is at least 20 times more noxious than CO2, negating all efforts to control greenhouse gas emissions.

Melting ice caps and thermal expansion of water mean rising sea levels. Left unchecked, island nations such as Tuvalu and the Maldives will, quite literally, drown.

The world will soon have to deal with a new kind of refugee -- the Eco Refugee. If Greenland were to melt and disturbing changes have already been documented, the sea levels would rise by as much as 20 feet.

The existence of cities such as Mumbai, Kolkata, Shanghai, and New York, is threatened with drowning.

About 60 to 70 per cent of the oxygen we breathe is produced by phyto placton (ph) (tiny algae), that live in the oceans. When CO2 dissolves in the earth's oceans it disturbs the ph blance of the water, the end reult of this is that the oxygen producing plankton are also under threat. The earth's oceans and forests not only create oxygen but also stock billions of tonnes of CO2 every year. They are the planet's lungs.

A study by the University of Leeds has shown that the exceptional aridity caused by rising temperatures has transformed the rainforest from a burial pit for CO2 to a CO2 emitter. Too many dying trees liberating CO2 as they decompose is the direct reason for this.

Another study carried out from 1981 to 1990 by a Federal Swiss research group, has observed that the more the atmosphere is carbon dioxide-charged, the less the trees are able to exhale and the end result is less rainfall.

Rising temperatures are disturbing the natural balance and although there may be some debate about the precise mechanisms of climate change, there is no doubt that beyond a given point, nature will be unable to sustain itself.

One of the reasons that the warnings have fallen on the proverbial deaf ear is their vagueness in terms of time. It is widely and wrongly assumed that the world has the luxury of time.

Like any other epidemic, it is assumed by most that global warming will hit the 'other' and not our own part of the world. Both these assumptions are incorrect. We do not have the luxury of time and the epidemic is global.

Further, if not checked now, say in the next 10 years, it will be irreversible. If we are unable to stop the temperatures from increasing in the next 10 years then the planet we leave, not to our future generations, but to very next one, will not be the one we were blessed to be born on.

History has a way of repeating itself and looking back we tend to wonder how people could have acted with such lack of foresight.

In the West, there is a growing awareness and the young have begun to discard the clothes dryers for drying on the string to save energy. Serious attempts are being made to create general awareness with new documentaries.

Today, if we do not act then all our current issues of terrorism, global economic crises will seem like anecdotes to future generations, and it is of the worst kind of negligence that our children will accuse us.

In the West, they have begun to look at climate change as a threat multiplier; in India's neighbourhood, weakened or failing states living on the margins and already under multiple stresses of instability, have little capacity to meet additional pressures from climate change.

Acting to stop climate change should not mean having to deprive developing nations their developmental goals.

While the tendency to ignore consequences of unmitigated development practices in the initial years of development is understandable, it must be remembered that it is not wise to repeat the mistakes developed nations made to get where they are today. It serves no purpose today to condemn science or industry for past errors.

The world's rich nations are having to deal with the 'lock-in' effects of infrastructure and technology decisions that were made long before today's technologies became available.

It is more realistic to assert that science and technology will let us find earth friendly solutions to achieving sustainable development in today's context. There is simply no argument for using obsolete technologies where newer, better and in the long term cheaper technology options are available and have to be shared.

In this country there seems to be a perception that the current ecological disaster is a responsibility of the developed world. If India wants to play in the big league we must stop seeing ecological solutions as mere impositions. We need not be the victims in this case.

In a country where many of our infrastructure decisions are yet to be made, let alone put into practise, we have a unique chance to make the right decisions. This could, in fact, be a win-win situation.

To name just the better known ones, India has the potential to harness substantial amounts of solar power, because of its very abundance, and wind energy, by installing the more efficient offshore windmills along our coastlines.

No one solution exists to replace fossil fuels, but we should instead aim to create an energy infrastructure that is an amalgam of renewable, and therefore sustainable, energy sources in the long term.

On the eve of Copenhagen, where the world's fate is to be decided, we know that the technology exists, however, it is only any good if we can find the political will to drive it. Policy makers must be influenced and this is where each one of us can make a contribution.

Changing development pathways is about navigating through new, unchartered territories, evolving circumstances and not about merely mimicking the west. In the words of Robert Frost, it is about taking the road 'less travelled by'.

By freeing ourselves of the restraints of energy dependence, we will have placed ourselves very high in the global power game. The pay-off will be lower emissions and cleaner air. Who can argue with that?