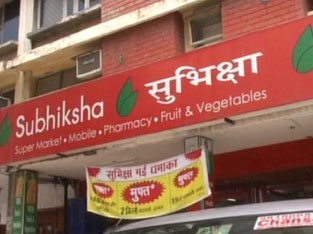 The Supreme Court on Monday hinted that it will ask the Madras high court to hear together the winding up and the merger proceedings of cash-strapped retail chain Subhiksha Trading Services Ltd with Blue Green Construction and Investments Ltd.

However, it posted the matter for directions on Tuesday.

The retailer was forced to shut its network of supermarkets across India due to acute financial crunch.

A bench, headed by Justice S H Kapadia, while indicating its intention to ask the high court to take up amalgamation proceedings before the winding up issue, directed the parties to give details of all proceedings, including amalgamation scheme so that it can issue directions in the matter.

On November 15, it had stayed the winding up proceedings initiated against Subhiksha till Monday.

It had also stayed the proceedings in connection with the amalgamation of the retailer with its subsidiary Blue Green Construction and Investments Ltd.

Challenging the high court verdict that dismissed Subhiksha's scheme of arrangement proposal, Cash and Carry Wholesale Traders Pvt Ltd, a subsidiary of the firm, in its plea said that no useful purpose would be served by the winding up of the company without exploring the possibility of settlement scheme with the creditors.

The C&C, which is a listed company, said that the high court's approach in dismissing its plea was 'erroneous' as it was BGCIL and the sponsor which would infuse the required Rs 250 crore (Rs 2.5 billion) in the ailing company and the same could be done only after the merger scheme was approved.

Senior counsels C A Sundaram and Mukul Rohtagi, appearing for Kotak Mahindra Bank [Get Quote] and Hindustan Lever [Get Quote], respectively, opposed the plea of C&C on the ground that the latter was not a party in their winding up petitions.

C&C senior counsel Ashol Desai said it would be able to infuse funds to the tune of Rs 250 crore (Rs 2.5 billion) only after amalgamation.

"We are trying to work out a methodology within the Company Law to revive the retail chain," Desai said in reply to Justice Kapadia's query on how it would be able to raise Rs 250 crore.

C&C submitted that 'the impugned order has the effect of shutting out all efforts to revive the company which otherwise is viable as proposed by the scheme.'

C&C in its petition said that the board of directors of BGCIL and Subhiksha had approved the merger scheme in June last year whereby all the assets and liabilities of the retailer were taken over by the former and the new entity was to be named as Subhiksha Ltd.

While seeking a stay on the proceedings before the high court, the petition said that if the court passed orders on various proposals regarding corporate debt restructuring and scheme of settlement with the creditors, it would adversely prejudice the interests of Subhiksha and the petitioner as a shareholder.

Even the Subhiksha's shareholders had also passed a resolution authorising its Board of Directors to enter into a business arrangement with BGCIL, it added.