The recent bailout of Romania by the International Monetary Fund puts the spotlight back on the East European block of countries and what it means for the Western European banking sector. If evidence is anything to go by, things are turning for the worse. In fact, if a block of countries could be termed 'sub-prime', Eastern Europe seems to qualify as the countries seem to have been battered and bruised big time by the ongoing global financial turmoil.

With the financial contagion going beyond the developed West, few countries seem to be as hard hit as these are. These are the countries that had earlier benefited tremendously from the cheap global credit which helped them finance the consumption and investment boom.

They ratcheted up large external debts to fund their ambitious growth. And now they are feeling the pain. The freezing of money markets in the United States and Western Europe, followed by a sharp increase in credit risk subsequent to the Lehman Brothers bankruptcy, drove investors into a liquidity scramble.

In Eastern Europe, these events translated into capital repatriations, lower foreign investment and higher risk premiums. The slowdown in the developed economies and, finally, the onset of the recession in the second part of last year brought a fall in Eastern European exports, which further exacerbated the downfall.

This is amply evident from the fact that for most of these economies, current account balance has deteriorated like nobody's business over the last few years.

In fact, IMF data shows that, on an average, the current account deficit for this region more than doubled between 2003 and 2008.

Consequently, the region's currencies also plummeted. Banks in Hungary and the Baltic states fueled consumer boom in recent years by lending heavily in foreign currency, most notably Euro and the Swiss Franc. Sometime, more than 50 per cent of a local bank's loan portfolio was in foreign currency.

Consumers were demanding loan in foreign currency simply because these carried lower interest rates. Things were fine as long as the currency remained stable or even appreciating. But a sharp depreciation in the values of the local currency over the past year has increased the loan burden substantially, leading to deeper recessions and the banks facing heavy loss. Not surprisingly these economies are skating downhill.

Hungary and Ukraine has already turned to the IMF for multi-billion-dollar bailouts, and Romania turned out to be third in the list as IMF said on Wednesday (March 25, 2009) that it would come to the rescue of Romania as part of a Euro 20 billion financing package to help it weather the financial crisis.

Next in line seem to be the Baltic countries which are suffering one of the most severe recessions of any region. Estonia and Latvia are expected to have seen their economy recording negative growth in 2009, while for Latvia the growth rate was down by nearly 60 per cent.

This is a frightening development indeed. As mentioned earlier, we are virtually staring at a group of countries that are looking increasingly like sub-prime.

Recently, Credit Suisse released a scorecard which is called Vulnerability Scorecard for countries. This scorecard ranks a number of countries around the world on factors usually taken into consideration when assessing the credit quality of sovereign debt. The same is produced below.

Not surprisingly Iceland is at the top. This country has become a poster boy of doom invited by reckless policies. But what is more important to note is that in the top 14 countries in the above lists, eight are from Eastern Europe. Fortunately for us Indians, we are in a much better position at 25.

This brings to fore, the question of the likely implication of the deteriorating condition in Eastern Europe on the Western European financial sector.

Before we go into this, a brief recounting of history is in order. In Eastern Europe, banks were privatised during the 1990s and early 2000s. The preferred method of privatization was the sale of a majority stake in a local state-owned bank to a big foreign banking group, deemed capable of restructuring it and making it profitable.

Consequently, nowadays most banks in the region -- and especially in those countries that are now members of the European Union -- are owned by big Western Europe groups. The Eastern European subsidiaries of all of these banks, often among the largest in their home countries, form a significant share of their assets.

What also led to this scenario is the European regulation which has allowed European banks to take on much more leverage than their American counterparts.

In Europe, unlike in the United States, it is only risk-weighted assets which matter to the regulators, not the total leverage ratio. European banks can therefore apply a lot more leverage than their US counterparties, provided they load their balance sheets with higher rated assets.

This is what they have been doing. Problem is, what was AAA couple of years earlier is possibly a junk now. And, clearly that's a problem. 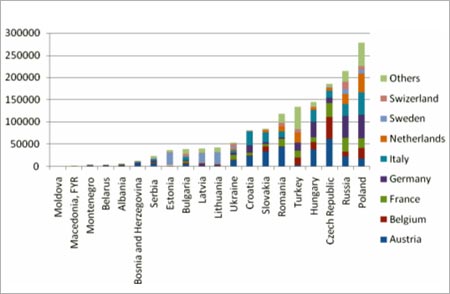 And because of this huge exposure, the growing crisis in Eastern Europe is now proving critical to their financial health. Furthermore, a fall of any one of these banks due to losses on their operations in Eastern Europe will add a new threat to the stability of the European financial system.

The next chart produced, identifies the Western European countries that have more exposure to East Europe. 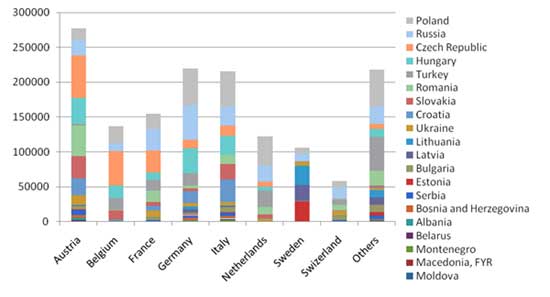 Going by this, Austria is the country most at risk. It is followed by Germany and Italy. However, to understand the real problem, it is important to bring the size of the economy to focus which will give the extent of risk at relative level. Doing so brings about an interesting situation. 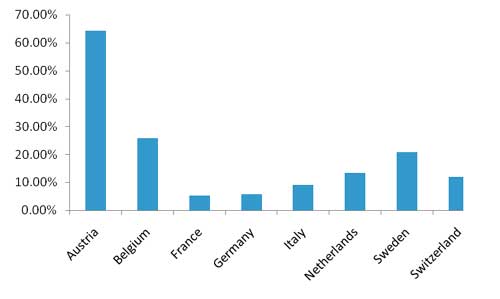 Clearly, Austria is the country that is at maximum risk with exposure topping 60 per cent. Their top four exposures are in Czech Republic, Romania, Hungary and Slovakia. Of these, Romania and Hungary are already facing problems.

Banks of other Western European countries are at relatively less risk. However, at 20 per cent plus, Belgium and Sweden are still at high risk. Sweden, in particular, is at more risk because they have maximum exposure to Baltic countries which has been impacted the most by the recent turmoil.

To conclude, it turns out that Eastern Europe has now become the sub-prime borrower of Western Europe. As was the case with the US mortgage borrowers, both the public and private sector in Eastern European countries are highly leveraged while falling currencies and declining output mean lower income in the immediate future.

Because of the deepening recession in the United States and Western Europe, the Eastern European countries are moving quickly into negative growth rates as well. And with them comes the increased risk of default on debts. Seemingly, there is a long way to go before all the risk plays out in Europe.

The author would like to acknowledge the help received from Mr. Swapan Kumar Pradhan of BIS (www.bis.org) for the help rendered by him in getting the BIS data.

The author is COH, Knowledge Service Division, Infosys [Get Quote] BPO Ltd. The views expressed here are his own. Comments are welcome at http://kunalsthoughts.weebly.com