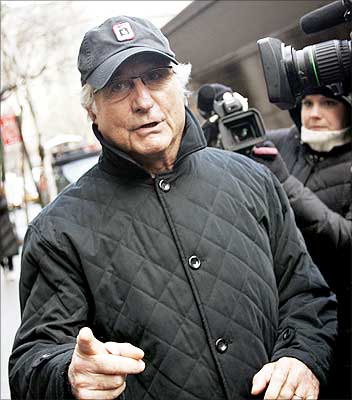 Bernard 'Bernie' Madoff has pleaded guilty to all the eleven charges against him in what is seen as the largest scam in the history of Wall Street. When sentenced, he faces up to 150 years in prison.

Victims of Madoff's Ponzi scheme, which drew in as much as $65 billion over two decades before the 2008 market meltdown, had been invited to speak when the former Nasdaq stock market chairman admitted to 11 criminal charges.

The gray-haired 70-year-old Madoff, looking grim in a gray suit, walked into the Manhattan federal courthouse at 7:19 a.m. EDT after being escorted past dozens of photographers and TV crews in the early morning light.

The scam quickly turned the 70-year-old Madoff into one of the most vilified men in the world as thousands of investors came forward to say they were defrauded.

Legal experts say the probe might turn to others, including Madoff's brother Peter, and his sons Mark and Andrew, all of whom worked closely with the disgraced investment manager.

Madoff's wife Ruth is about to get her own lawyer, having previously relied on Sorkin. -- Agencies