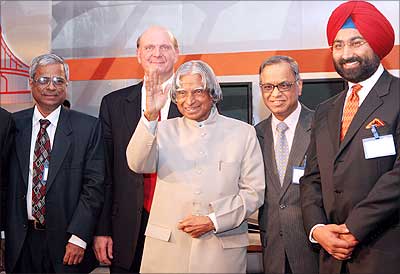 In the two years since becoming CEO, Malvinder Mohan Singh has systematically purged risk out of Ranbaxy's model.

Malvinder Mohan Singh, 35, does not mind wearing a T-shirt in office - tucked in. He smiles easily and is comfortable before the camera. He has lost four inches on his waist.

There are other, more mundane reasons why Singh (referred to as Malav by nearly everyone who knows him - right down to the security guard at the gate who makes the allowance of adding Saab) is at ease facing the world.

The share price of the pharmaceutical company, India's largest by sales, is hovering at historic highs. Citigroup Global markets talks of the stock as its top pick, with a target price of Rs 620 a share. Its share of the domestic market has increased to 5.05 per cent, which is more sizeable than it appears, given that the domestic pharmaceutical industry is fragmented into some 20,000 companies.

Cookery competitions and birthday parties are held regularly in the company, as are fancy dress shows (Singh dressed as colourful singer Daler Mehendi at one of these). In his office, there is a cutout of, "Ranbaxy [Get Quote]/fun @work", which he has registered as a trademark.

Work may not have been so much fun when Singh took charge as the chief executive officer in January 2006. The previous year (Ranbaxy follows the calendar year), the net profit had fallen 62 per cent, sales were flat, the return on capital employed was a measly 5.3 per cent and return on net worth 10.6 per cent. The company was too dependent on the US, which accounted for 45 per cent of its business.

Singh lost no time to embark on a mission that has systematically reduced risk in the company's business model. His diagnosis and prescription would have been accurate - apart from the buoyancy in the share price, the return on capital employed has jumped more than three times and the return on net worth more than two-and-a-half times.

The geographical risk is more comfortably spread now. Emerging markets bring in 55 per cent of its revenues, with the share of the US down to 25 per cent.

"When I took over as the CEO, I was clear that we needed to change our strategy. We were heavily focused on doing everything on our own. We were litigating with everyone. We were not making the best use of resources and needed to improve our speed," says Singh.

He exploded out of the blocks at astonishing speed. The first year as the CEO was breathless. He clinched a flurry of overseas acquisitions to build scale.

In four days at the end of March 2006, Ranbaxy announced three acquisitions: the unbranded generic business of Allen SpA (a division of GlaxoSmithKline [Get Quote], or GSK [Get Quote]) in Italy, Terapia in Romania and Ethimed NV, a generics company in Belgium. This was followed by the acquisition of Mundogen generic business of GSK in Spain in July and Be-Tabs Pharmaceuticals in South Africa in December.

Singh cooled off by the end of the year. The only significant overseas acquisition the following year was of the US rights to a group of 13 dermatology products from Bristol-Myers Squibb Company in May.

Ranbaxy the acquirer and litigator began to morph into something that was more amenable to alliances and partnerships, and out-of-court settlements. It signed a pact with GSK to expand their 2003 alliance for drug development and gave PPD, Inc exclusive worldwide licence to develop, manufacture and market Ranbaxy's novel statin for the treatment of dyslipidemia.

It reached an agreement with GSK to dismiss their US litigation over Valtrex; Ranbaxy would enter the US market in late 2009 as the first generic company with six-month exclusive rights to market the drug.

It agreed with Astellas/Boehringer Ingelheim to dismiss their US court case over Flomax (Tamsulosin capsules) and settled with GSK over Sumatriptan Succinate, the generic version of GSK's Imitrex; Ranbaxy would launch the generic drug in the US in December 2008. Last month, it signed a bunch of agreements with AstraZeneca, earning the right to start exclusive sale of generic Nexium in 2014 and promised to announce another similar pact early this month.

All these have yielded positive results. HSBC Global Research says, "We value (the) Nexium opportunity at Rs 51 a share." The new approach has also brought much-needed certainty to Ranbaxy.

"The settlements with Big Pharma (the world's biggest companies) brought in more certainty of launching products in the US. In litigation, there is always uncertainty. You may have a strong case, but not win. We have the second largest first-to-file pipeline for the US after Teva (the world's largest generic drugs maker). We are the only company which will, every year, have one first-to-file for a billion dollar plus product," says Singh.

Ranbaxy has 98 Abbreviated New Drug Applications pending approval, including 19 first-to-file representing $27 billion in current sales. ANDAs allow a generic manufacturer to avoid the process of repeating all of the biological tests; showing bioequivalence is enough. A successful first-to-file challenge against patents grants the company six months of exclusive marketing rights.

Citigroup Global Markets believes Ranbaxy is in line with the changing industry dynamics and challenges. The strong pipeline and front-end, "and efforts to move to a more capital-efficient model make us positive on its short- as well as long-term prospects," it says.

At the same time, Ranbaxy, the giant at home, moved to get footholds in domestic companies that complimented it. Less than two months after Singh took charge, Ranbaxy took 7 per cent equity in Zenotech Laboratories [Get Quote] and forged an alliance with it to market its oncology cytotoxic injectible products under the Ranbaxy label. That equity stake has since gone up to 48 per cent, though the original promoter continues to be in charge of operations.

In January 2007, it acquired 14.9 per cent in Krebs Biochemicals, which would help it leverage Krebs' API and Fermentation capabilities and derive cost benefits. Three months later, it entered into an agreement to acquire 14.9 per cent in Jupiter Biosciences and struck a global supply arrangement for Peptides.

Seasoned by now, Singh in April made his shrewdest move yet in acquiring 14.7 per cent in Chennai-based antibiotics exporter Orchid Pharmaceuticals. The acquisition was done through Solrex, a partnership firm between Ranbaxy subsidiaries Solus Pharma and Rexcel Pharma.

In the weeks to this announcement, though most people saw a connection between Solrex and Ranbaxy, the company kept quiet and left everyone to their conjectures. A visible involvement of Ranbaxy would have fuelled a rally in Orchid's shares, increasing the cost of the acquisition.

"From the compliance perspective, we did what we were required to do and disclosed when we were ready to talk� We picked up the shares when the market was down," says Singh. There is also an agreement with Orchid to synergise manufacturing and marketing capabilities across geographies and therapeutic categories.

Singh went to all the four with the same proposition. "You have the technical skills and R&D, but are limited to the emerging markets. We have capability to take it to the developed markets. One plus one is not two; it's four."

Singh will need all the permutations to thrive in the increasingly competitive industry, marked by pricing pressure. However, looking fighting fit, he says: "When you are the leader, you have to set the pace for the industry."