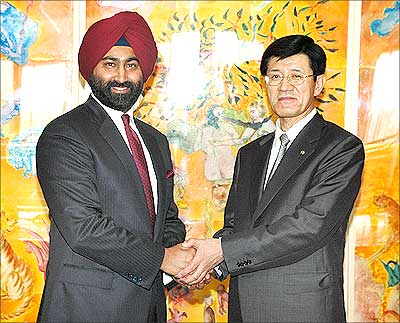 Marking the largest ever deal in Indian pharma industry, Japanese drug firm Daiichi Sankyo on Wednesday announced the acquisition of a majority stake of more than 50 per cent in domestic major Ranbaxy [Get Quote] for over Rs 15,000 crore (Rs 150 billion).

Under the deal structure that would create the 15th biggest drugmaker globally, the Japanese firm would acquire the entire 34.82 per cent stake in the Gurgaon-based firm from its current promoters  Malvinder Singh and family.

Besides, Daiichi would also make an open offer for an additional 20 per cent stake in Ranbaxy at a price of Rs 737 per share  which represents a premium of over 50 per cent on the average price over the last three months.

Post this offer, the deal would value Ranbaxy at about $8.5 billion (over Rs 36,000 crore). The purchase of shares from the promoters and through the open offer is expected to value the deal between $3.4 billiona and $4.6 billion, the two firms said in a joint statement.

Even as Malvinder Singh would continue as CEO and MD of the entity, which would retain its Ranbaxy brand, the family would net in about Rs 10,000 crore *Rs 100 billion) by selling their stake.

Singh would also assume the position of chairman of the board upon the deal's closure that is expected by March 2009.

Besides the promoters' 34.8 per cent stake, Daiichi would also get about 9 per cent through issue of preferential allotment of shares and some warrants, which could be later converted into another 4.5 per cent holding. These, along with a minimum 8 per cent that the new promoters wish to acquire through the open offer, would take Daiichi's holding to above 50 per cent.

Post acquisition, Ranbaxy would become a debt-free firm with a cash surplus of around Rs 2,800 crore (Rs 28 billion).

The two firms said they plan to keep Ranbaxy a listed entity in India.

The combined market capitalisation of both companies would be around 30 billion dollars making it the world's 15th largest pharmaceutical company.

A binding share purchase and share subscription agreement was entered into by Daiichi Sankyo, Ranbaxy and the Singh family, Ranbaxy said.

"As the company moves into a next level of growth it would benefit the organisation, its shareholders and the employees," Ranbaxy CEO and Managing Director Malvinder Mohan Singh told reporters, while adding, "Now it is a clear opportunity ahead of us to leverage from each others' strengths."

The proposed open offer price of Rs 737 represents a premium of 53.5 per cent to Ranbaxy's average daily closing price on the NSE for the three months ending June 10, 2008.

Besides, the offer price is 31.4 per cent higher than Tuesday's closing price, Ranbaxy said.

"Malvinder Singh will continue to lead the company as its CEO and managing director, while additionally assuming the position of chairman of the board," Daiichi Sankyo president and CEO Takashi Shoda said.

The Japanese firm said there would be 10 members in the board and Ranbaxy would appoint four members, including Malvinder Singh, while the rest of the members would be from Daiichi Sankyo.

"Daiichi Sankyo has operations in 21 countries and by entering into agreement with Ranbaxy, we will have presence in now 60 countries globally," Shoda said.

Commenting on the deal, Singh said it puts Ranbaxy on a new and much stronger platform to harness its capabilities in drug development, manufacturing and global reach.

"With this, we will see significant growth in our business in Japan as the generic drugs market in the country is also opening up," he said.

Explaining the deal Singh said, post closing Ranbaxy would continued to remain an independent identity and all the strategic tie-ups of the company including the deals with Zenotech, Orchid and Merck would remain unaffected.

The hived-off research and developed division of the firm would also continued to be remained the part of the company.

"Together with our pool of scientific, technical and managerial resources and talent, we would enter a new orbit to chart a higher trajectory of sustainable growth in the medium and long term in the developed and emerging markets organically and inorganically," he said.