Every year around 25 million children are born in India, almost one every second! Result: a bursting population. But this is not a story of India's teeming millions or what should be done to control this boom.

It is a story of India first public stem cell bank. And what is a stem cell? And what has it got to do with newborn babies? Read on to find out.

Other than bone marrow, the blood in the umbilical cord also has stem cells (and this is why the reference to India's childbirth). It can be also used as a source of cells for transplants quite like the bone marrow stem cells.

The umbilical cord stem cells have a number of important advantages compared to the bone marrow stem cells.

The major advantage is that umbilical cord blood stem cells are easier to gather than stem cells from the bone marrow. They have the unique ability to regenerate/reproduce into over 200 types of tissues. Above all, such stem cells, collected from the umbilical cord of your child, can be frozen and kept in a bank, which can be used later. God forbid, if something untoward happens to your child you won't have to turn heaven and hell to find a matching donor.

Last year more than 6,800 cases were reported globally where stem cell transplants have been successful.

LifeCell is India's first such private stem cell bank, where you can store the umbilical cord of your child for a fee, for future use.

LifeCell, in collaboration with CRYO-CELL International, USA facilitates the cryogenic preservation of stem cells at its unique facility in Chennai. LifeCell has set up a 21,000 sq ft laboratory at the cost of Rs 14 crore on the outskirts of Chennai city.

The storage of stem cells is done at at -196� Centigrade under liquid nitrogen.

In Europe and in the United States many private stem cell banks like LifeCell operate as dual banks; that is as a private bank where individuals keep their stem cells by paying an amount, and also a public stem cell bank from where anybody can buy stem cells if they can get a match. 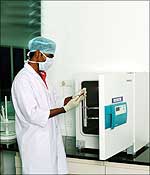 LifeCell has only a private stem cell bank currently, but now for the first time in the country, they are planning to have a public stem cell bank also.

What is a public stem cell bank?

"In our private stem cell bank, customers store their umbilical cord stem cells for their future use by paying us an amount. But if they do not want to store it for their own future use, they can donate the stem cells to the public bank. We can also collect stem cells from various hospitals and store them for the public to use," V R Chandramouli, CEO of LifeCell, explained.

So, how do they get stem cells from hospitals?

"We have tie-ups with 300 hospitals in the country. So, any mother delivering in these hospitals can donate her umbilical cord to us. She has two options, either donate it for the public or let it go waste. There are no hurdles as far as the hospitals and doctors are concerned. But what we need now is to form a trust that can handle public stem cell banking," Chandramouli said.

To the question why they need a trust, Chandramouli said, LifeCell already has a private stem cell bank, the public bank has to remain separate from it, and there should not be any mix up.

In the case of a public bank, they have to do more tests on HLAs (Human Leukocyte Antigens) or proteins, like the tests done for blood groups in blood banks. In the case of umbilical cord protein matching, all the six proteins need not match; even a 4:6 matching is possible unlike the bone marrow matching.

Once it becomes operational, it will be the first public registry from India, Chandramouli said.

Will not critics look at LifeCell as exploiters of 25 million births in India?

"We are talking about what goes waste after each birth. With 25 million births happening in India, it is an opportunity for India. In the process, the entire world will be benefited. LifeCell gets paid only for the analytical and storage services. All other benefits will go to the trust. Many multinational companies in the US run such trusts but they also use the umbilical cord stem cells for R&D because a lot of research is going on right now on stem cells.

"At present, cure has been found for only six diseases, and there are 74 more diseases where clinical trials are going on. We are also in discussion with many such pharma companies and universities. But we need government approval before we go deep into all this," he said.

"Once that is done, India will be on the world map as far as stem cells are concerned. Today, one stem cell costs about $25,000 (more than Rs 11 lakh)," Chandramouli said.

But according to Chandramouli, a regulation in India is absolutely essential as "we are talking about the entire world. There should not be any exploitation. There should also be affordability."

Chandramouli also informed that LifeCell does not plan to pay and buy umbilical cord stem cell from anyone.

This raises the question, why should a woman donate her umbilical cord if somebody else is going to make a lot of money out of it? Does she also have to pay for the stem cells that she has donated if she needs to use the same in future? Who has the right over the stem cells, the woman who has donated them, or the organisation that spends money to store it?

There are several such unanswered questions right now. The general consensus is that the government should come out with proper guidelines before allowing private companies to start public stem cell banks that will cater mainly to those who are rich. More Specials