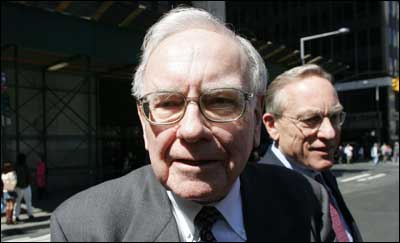 In what is believed to be the largest charitable gift made in the United States, the world's second richest man Warren Buffet plans to donate the bulk of his $44-billion (Rs 202,840 crore) fortune to the Bill and Melinda Gates Foundation.

The donations, outlined in a series of letters Buffett released on Sunday, represent a singular and historic act of charitable giving that vaults him into the top tier of industrialists and entrepreneurs like Andrew Carnegie, Henry Ford, J Paul Getty, W K Kellogg and Bill Gates.

The chairman of Berkshire Hathaway Inc. plans to give away 85 per cent of his fortune, or about $37.4 billion (Rs 172,414 crore), all in Berkshire stock. Of that amount, he will channel the greatest share, about $31 billion (Rs 142,910 crore), into the Gates Foundation.

The announcement comes weeks after the world's richest man and Microsoft Corp. co-founder Bill Gates himself decided to step down from his daily duties at the IT giant by 2008 to devote more time to his philanthropy foundation.

The Gates Foundation, dedicated to improving health and education, especially in poor nations, is already the US' largest grant-making foundation, with current assets of almost $30 billion, the New York Times reported. The Bill and Melinda Gates Foundation is the world's largest charity with assets worth more than $29 billion.

Buffett's huge contribution may permanently solidify that philanthropy's standing as the biggest and most influential organisation of its kind. Buffett will join Gates as a trustee of their foundation, the paper said.

The immense size of the assets at the disposal of the Gates Foundation as a result of the partnership is apparent when compared with the United Nations Educational, Scientific and Cultural Organization, which had a budget of $610 million for 2004-05, the report said.

The Gates Foundation made $1.36 billion in grant payments in 2005. At a minimum, Buffett's contribution may eventually allow the foundation to more than double that amount annually once he transfers all of his stock, the NYT said.

However, Buffett's contribution will not be made all at once, but rather in 5 per cent annual increments. Moreover, the distribution could change in an as-yet unspecified way if Buffett dies before the entire sum is paid.

The terms of the donation also require the continued active participation of at least one of the Gateses for the payments to continue, the report said.

The second-largest charitable foundation in the country is the Ford Foundation, with an endowment of $11.6 billion.

Buffet, 75, and Gates, 50, the NYT said, have become close business associates and confidants since they met in 1991, and the linking of their fortunes and their legacies through the Gates Foundation marks the latest twist in their friendship.

In addition to travelling together and playing online bridge games, the two men routinely seek out each other's advice on personal and business matters, the paper said. -- PTI