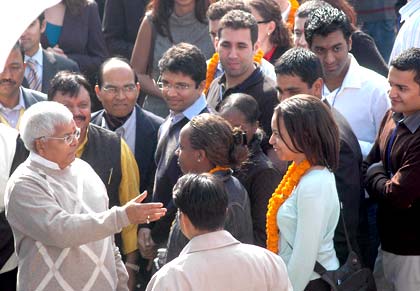 The going was not all that smooth for Railway Minister Lalu Yadav, who has received fulsome praise from various quarters for his turnaround of the Railways, as he addressed a group of students from the elite Harvard and Wharton Business Schools of the US on Wednesday.

The minister, who called himself 'Guruji', explained to the students in Hindi how he had broken the myth of the western model that an enterprise, which proves to be a 'liability' should be privatised and its employees given the golden handshake. His speech was translated.

But the students from various countries, who wore tilaks and garlands, questioned the sustainability of his model.

Kunal Singh, an Indian student at Harvard, told reporters, "We asked him if his model was sustainable. What happens when he exits as railway minister?"

Singh also asked Lalu why he could not turn around Bihar in the 15-year rule of his RJD in that state, while he changed the railways within 30 months. "Lalu said Bihar needed an outside push. It had too many problems, while the railways had a lot of potential. It is like an empire."

Lalu referred to the students as 'achcha bachcha log' (good kids) and exhorted them to be honest and hard-working during the hour-long lecture that was not open to the press.

"I told the 'cream of the society' (the students) that I did not follow what the think-tanks and experts say in the West about loss-making ventures," he told reporters after his interaction with over 100 students from the business schools at the Rail Auditorium in New Delhi.

Lalu earlier gave management tips to students at the Indian Institute of management in Ahmedabad and the chief of US corporate giant General Electric came to India to study the success of the railways.

The minister, who wore a fawn-coloured sweater and his trademark white kurta-pyjama, said he had put a "skeletal framework" in place for transforming the railways, and it would not be difficult for anyone to emulate the model.

The press was not allowed into the lecture as the students insisted on maintaining the 'sanctity of a classroom' while hearing Lalu's lecture. But there were some who later spoke to reporters on condition of anonymity.

"I wish he hadn't taken all credit for the success. I wish he'd given some credit to the railway board," a student from Harvard told PTI.

Neerja Shukla, a former student of IIM-Ahmedabad who attended the lecture and had heard Lalu before, said: "Lalu did not speak in his characteristic way. He was more serious this time. In fact it was his Officer on Special Duty who explained the railways' model to the students."

Another student felt the handing over of power to the middle management of the railway ministry was the key to Lalu's success story.

Lalu himself acknowledged the role of officers who helped make the railways a Rs 13,000-crore (Rs 130 billion) surplus organisation within 30 months by saying, "IAS officers are not good here. They are good for law and order."

Lalu said he took up the 'challenge' of making the railways a profitable venture at a time when it was mired in huge debts.

Lalu also spelt out his "vision" for the railways by promising dedicated freight corridors and world-class stations. "We will set up 75,000 krishi (farmers) outlets on railway stations. It is sad we sell shoes in air-conditioned showrooms and food grains on the footpath.

"This is just the beginning. Asli cinema to baaki hai (the real movie is yet to come)," beamed Lalu, who kept referring to the railways as the lifeline of the country.