It won't be an exaggeration to say Nimesh Kampani, Chairman, JM Morgan Stanley, knows the Bombay Stock Exchange like the back of his hand. His father Nagindas and uncle Jamnadas Morarjee 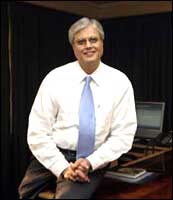 were names to reckon with at the BSE, but Kampani -- the ace merchant banker -- surprises us saying that he has never speculated in the market. That, however, has not stopped him from carrying forward a rich legacy.

One of the key players in making the BSE the engine of growth for the new Indian economy, Kampani has attained fame over the years for making possible mega acquisitions and mergers. He has come to be known as one of India's foremost votaries of liberalisation.

Kampani was one of those who propelled the stock exchange boom in the early 1980s when Reliance Industries [Get Quote] founder Dhirubhai Ambani entered the world of equities.

Nimeshbhai, as he is popularly known, is media-shy and a man of few words. For a change, he agreed to a rare and exclusive interview with Managing Editor (National Affairs) Sheela Bhatt in New Delhi and discussed what can bring about changes in India.

The second of a three-part interview:

Part I: 'India has arrived'

The world is saying India will grow, India will become a big power. What are the hidden risk factors in this hype?

There is too much liquidity across the globe. Rich people all around have so much cash in hand that they are looking for markets that are growing. How many places in the world are registering growth? Europe doesn't have much of it. Only Asia is attractive.

showing one to three per cent growth in most sectors. The US economy is developed. People there have cash in hand to spend. People in the US want to consume using credit cards.

Our risk factor lies in liquidity. Too much liquidity of those consumer economies is chasing Indian stocks. Because there is an absence of growth in their domestic markets. Their money is welcomed in India but the risk of withdrawal comes along with that.

If withdrawal of money happens it can very well bust Indian stocks.

In the last five years, $45 billion investment has come to the Indian markets from foreign institutional investors. Today, the market value of their money should be around $120 billion. Who will buy when they will rush in to sell?

Right now, one lot is selling and the other lot is buying. Those who bought shares at much lower price of say, Rs 80 are selling at Rs 800 and booking profit. The newcomers, on the other hand, are buying at Rs 800 with confidence in market. The new buyers will like to wait for the next five years for the stock prices to go further up.

We know Japan has invested $5 billion in the Indian market. Much of it is retail money. These days, as soon as new public issue opens, it gets filled up within the first few hours.

Because Japan has saved money for years. Investors there get zero or negligible interest. At some places, bank charges them for keeping deposits. In our banks, on the contrary, we get four per cent, at least. The Japanese are tired of dead investment. So they are looking out.

In the last one year, the Japanese have got return of 48 per cent in the Indian stock exchange. They had started with $1 billion. Now it has reached $5 billion. Nomura Securities and others invested in it. They take index stocks. When an investor does not know the country well, he tends to buy index shares only.

The Japanese and the Koreans have invested. Recently I met 30 parliamentarians from Denmark. I made a presentation to them on India's future. Thereafter, two of them came and talked about investing in Indian stocks.

What can go wrong in realising your dreams of India?

Politics. If something happens to this government and there is instability at the Centre, it can affect our growth.

In 2004, between May 13 and 18, the stock index plunged when Sonia Gandhi delayed her decision to announce (Dr Manmohan) Singh's name as the prime minister. The market picked up only when the announcement was made.

The investor does not like political uncertainty. They are afraid of power in the hands of Left parties or the so-called Third Front because all they want is a stable government. These days people say Dr Singh is the weakest prime minister but the stock market does not think so. Dr Singh may be weak politically but he is the best prime minister as far as the country's economy is concerned.

The prime minister along with Finance Minister P Chidambaram, Commerce and Industry Minister Kamal Nath and Deputy Chairman of Planning Commission Montek Singh Ahluwalia are too good for Indian markets.

China has not grown with the help of FII investment. Your comment.

Yes. China has grown with the help of bank money, or people's money. China has got four prime banks owned by the government. These banks' non-performing assets is approximately above 30 per cent. Can you imagine about Rs 6 lakh crore (Rs 6 trillion) is disappearing from the total deposits of Indian people kept in the Indian banks?

Chinese banks have more than what Indian banks have. Out of that money, 30 per cent has vanished. Its savings rate is around 40 per cent. The question is: Where has people's money gone? It has gone into building infrastructure. They have issued loans to whoever came to the bank. To build infrastructure, they were fast to disburse money. Now, they are writing off those loans. In India, bad debts of banking industry stands at a meagre 1.75 per cent.

China went ahead full steam without taking care of the accounting and financial niceties. India is a democratic country. Here, journalists and Parliament would ask questions about fiscal management. About 30 per cent of bad debts won't be allowed.

A friend of mine was in China recently. He was travelling along a road lined with houses on both sides. After 15 days, when he returned along the same road, he saw those homes had disappeared and a bigger road was being built. That is China. There the government can evacuate you in no time.

Many of us feel the Sensex boom helps only a few people. Indian slums are growing as ever.

Slums will not go away in the next two decades. You need wealth to distribute it. We need to create wealth in private hands. In China, government created wealth. In India, we are following a different route. The Indian process will be a slow one.

Recently we at Morgan Stanley, handled the issue of China Construction Bank. It is the first government-owned bank in China to go public. It was heavily subscribed. Meaning, China is now adopting discipline in fiscal management.

Recently, China collected around $8 billion from the US and Hong Kong and other places and wrote off old bad debts. Now, it has begun repairing its balancesheet.

Therefore, we need huge investment in infrastructure before we can even think of removing slums. We cannot tackle poverty until we raise money to finance infrastructure. I always believe that more roads, more construction and development of tourism are sure-shot ways to create huge employment.

Do you find deficit financing a big issue for Indian fiscal management?

I don't think it's an issue. India's deficit is under control. The problem lies with the states and not with the Centre. India's combined deficit is 10 per cent. States should improve financial management. Gujarat and Tamil Nadu are the best managed states as the governments there are excellent in financial management. They are developing their states' resources impressively.

If you are asked to take one creative decision as finance minister, what will that be?

I will go to Parliament and ask for permission to create fiscal deficit. I want to spend $50 billion on infrastructure! Here deficit financing is justified because I am not spending on people. Rather, I am creating assets. People will get employment and that should justify deficit planning. You need political guts and courage to do it.

Planners would fear that if tax does not rise, inflation will increase and savings would pump in more money. This, in turn, will increase liquidity. But all depends on the management of spending on infrastructure.

Spending on infrastructure will increase internal mobility of our people. I feel tourism and infrastructure are the areas where the Indian government should be involved. All other areas can be developed with private money.

India doesn't need FDI. To get FDI, you have to install infrastructure first. China is getting 10 times more FDI than India because they have invested in roads and bridges and airports.

Why do you say India doesn't need FDI?

FDI is not needed in India because we are getting more money from the FIIs. We are getting around $12 billion from them.

They are buying in secondary markets and that money gets into the Indian economy. While India gets around FDI worth $5 billion, China gets around $50 billion. They don't have our types of stockmarkets. So FIIs are absent there. In India, when FIIs pump in $12 billion, it means a few Indians have sold their shares to them (the FIIs), so that free cash gets invested somewhere within India by Indians.

That money goes into land, buying of new stocks and into banks.

The fundamentals of money are that it goes where it gets sound returns. Therefore, if you keep up our policies and make them fair, India should not worry which way it gets money. Mittal Steel, Reliance, Tata, Vedanta and other Indian companies are going to invest more than Rs 2 lakh crore (Rs 2 trillion) in the coming years.

FDI is not a big issue because Indians are in now a position to raise big money and invest in India. The government should see that people get returns.