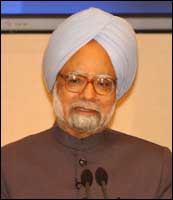 Dr Manmohan Singh, the architect of India's reforms programme, took over as the country's prime minister on May 22, 2004.

The economist-turned politician has pledged to press ahead with reforms and usher in "the Indian century." He said the reforms would be tempered to ensure the creation of jobs and to lift millions out of abject poverty.

In 1991, when Singh became the finance minister in the Congress government led by P V Narasimha Rao, India was on the brink of bankruptcy.

In his maiden speech as finance minister, Singh quoted Victor Hugo: 'No power on earth can stop an idea whose time has come.'

When Singh went to Prime Minister Rao and told him that India needed strong reforms to move forward, the latter supported him to the hilt. And thus began the restructuring process of the Indian economy and opened up the economy to competition and foreign investment.

Singh, unshackled the country from the bureaucratic controls and licence-permit raj, and took the economy to a high growth path of 6-7 per cent during his five-year stint at North Block.

Singh had also devalued the rupee and slashed subsidies for domestically produced goods.

The reforms introduced by Singh -- which included the reduction of several redundant socialist policies -- are regarded as primarily responsible for the present economic boom the country enjoys, and considered irreversible in face of the real progress achieved.

By 1994, when he presented his historic budget, the economy was well on its way to recovery. Nearly 1 crore (10 million) new jobs were created, an environment of liberalisation was set in motion and the foundation of an information technology and telecom revolution was laid.

Under Singh, the government entered into an understanding with the Reserve Bank of India [Get Quote] to deny itself the right to 'draw' on the RBI to fund its deficit. This put paid to the unlimited monetisation of the fiscal deficit.

Singh also got the government off the backs of the people of India, particularly India's entrepreneurs. He introduced more competition, both internal competition and external competition; simplified the tax structure and tried to create an environment conducive to the growth of business.

In an interview to PBS Singh had said: Competition is a two-edged weapon. It helps those who are strong; it hurts those who are weak. India must strengthen its capabilities to withstand the onslaught of competition.

Even though Singh opened the Indian markets for foreign direct investments, he had no intention to make India dependent on foreigners for savings. He firmly believed that "India's development would continue to be generated domestically".

Sigh laid stress on macroeconomic stabilisation and opening up trade and payment system. He thus put in place a macroeconomic adjustment program with the active support of International Monetary Fund. The program combined monetary, fiscal, and exchange rate policies to reduce India's gaping internal and external imbalances. IMF played a critical role in assisting India during its period of crisis.

Singh replaced quantitative restrictions by tariff and then slowly went on reducing the levels of protective tariffs. Even now India's tariff rates are among the highest in the world; but considering the kind of opposition he faced in doing this, the progress is quite impressive

So how successful were Singh's policies? In an IMF paper, noted economist C Rangarajan while penning his opinion said while monetary policy was on the right track, more could have been done to reduce inflation.

India's main success in trade reform has been in the area of tariffs. In 1990-91, the unweighted average tariff was 125 per cent. That figure came down to 71 percent in 1993-94. A considerable increase in exports took place with tariff reduction and removal of other barriers. Prior to the reforms all imports were either submitted to licensing or prohibited altogether. All bulk items such as cereals, petroleum, mineral ores, metals and fertilisers could be imported only by specified government agencies.

Singh's stint as finance minister has as many critics as admirers. Thrice he had submitted his resignation during his five-year tenure but Prime Minister Rao did not allow him to quit.

First time was when the Congress Party was agitated by the hike in fertiliser prices; the second time when the financial scam involving big-bull Harshad Mehta came to light; and lastly when Joint Parliamentary Party submitted its report to criticise some Union ministers and his ministry on the scam.

Mrinal Datta Chaudhuri (professor and ex-director, Delhi School of Economics) in an essay on Singh wrote: The area of failures is also quite large. The spending behaviour of the government and the operational characteristics of the public sector remained largely unreformed.

He, however, went on to say: Where, I think, Manmohan Singh has done a remarkable job � is in educating his countrymen about the desirability of pursuing economic progress in an open-economy framework. This is no mean achievement, if one realises that economic nationalism has been the most influential political religion in India.

Today, even though legislative achievements have been few and the Congress-led alliance is routinely hampered by conflicts within the coalition, Singh's administration has promised to reduce fiscal deficit, provide debt-relief to poor farmers, extend social programs and advance pro-industry economic and tax policies.

But will the government under Dr Singh manage to usher in the kind of reforms that the country needs? Will the government take the required tough measures to open up the economy to foreign competition; dismantle government-administered price controls; divest government equity in public sector undertakings and removing bureaucratic and legal hurdles to speed up investment in the infrastructure sector?