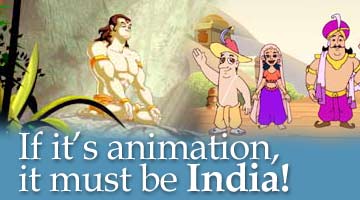 India's animation sector is witnessing a major boom. Overseas entertainment giants like Walt Disney, Imax and Sony are increasingly outsourcing cartoon characters and special effects to India. Other companies are outsourcing animation from India for commercials and computer games.

And cities in India like Mumbai, Chennai, Bangalore, Hyderabad and Trivandrum have emerged as the country's major animation hubs.

These animation firms have set up large production studios that are equipped with state-of -the-art equipment and hardware and software like SGI, 3DMax and SoftImage, SFX and processing motion capture facilities.

"Work is pouring in from places like the United States, Europe and Asia in the form of outsourced projects and co-production deals," points out P Jayakumar, Chief Executive Officer of Toonz Animation, arguably India's biggest animation player.

Toonz Animation is a complete state-of-the-art facility, staffed with internationally trained creative professionals from around the world. Its primary studio, Studio A, is located at Technopark in Trivandrum where over 400 artists and technicians create animated 2D and 3D films.

Animation veterans like Jayakumar says that India has become an outsourcing hub for animation films because:

The total cost for making a full-length animated film in America is estimated to be $100 million to $175 million. In India, it can be made for $15 million to $25 million.

C K Prahlad, an animation consultant based in Bangalore, says the biggest advantage is the cost factor. "Indian animation companies are charging extremely low rates compared to other countries. That is attracting the Hollywood companies to outsource their animation film series to the country," he said.

Major US animation studios and producers are realizing this huge cost advantage that India offers.

"Due to changing viewing habits, channels or networks are being forced to bring down licence fees. As a result, the volume of work has been dropping.

In this situation, India's advantage of low production costs could be a boon to the domestic animation industry," said Margaret Dean, Sony Pictures' head of family entertainment group and a consultant to various animation studios in the US, during a recent India visit.

According to the National Association of Software and Services Companies (Nasscom), the total revenues of the animation production services sector in India were estimated by between $200 million and $300 million in 2004.

Last year, a Nasscom study on the animation industry showed that the global animation production market is set for major growth. The study, which is based on multiple statistical projections on the market, from segments such as industry sources, Pixel Inc and Arthur Andersen (Study on the Entertainment and Media sector) forecast that the global animation market would generate revenues worth $50-70 billion this year.

But which are the countries that India is competing with in getting animation outsourcing?

"Primarily, we are competing with China. But even here, our quality standards are much higher than Chinese studios," argues Jayakumar.