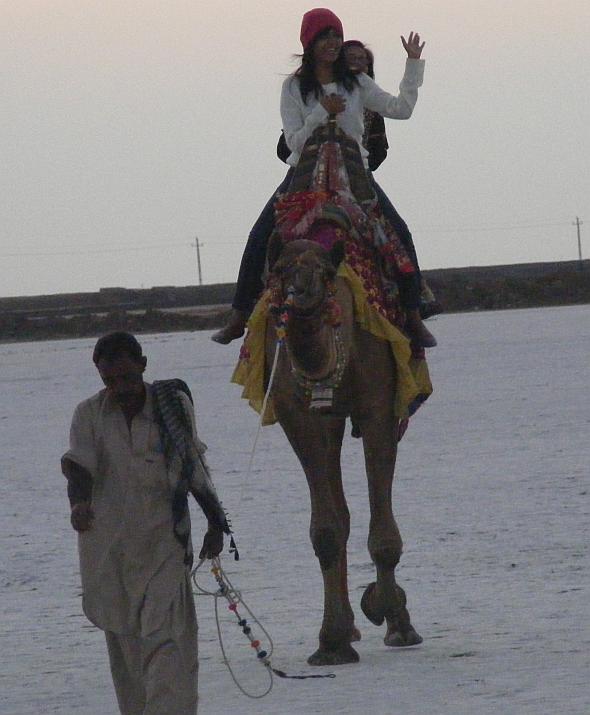 Get Ahead reader Bienu Vaghela, with husband and daughter in tow, spent several chilly nights and hot, delicious meals in the Rann of Kutch.

Our December 2013 outing was indeed planned after watching Gujarat Tourism’s heavy-duty advertisement, featuring Amitabh Bachchan, with an aim to promote the state’s magnificence: be it the Somnath Mandir, Gir Forest, or the Rann of Kutch.

What caught my fancy in a big way was the white Rann of Kutch with Amitabh Bachchan taking a stroll in a moonlit Rann. The Rann couldn’t have looked radiant than that.

We planned the trip after rigorous research on Kutch, particularly the Rann, for which not much information was available before firming up my decision.

After lot of research and whatever information was available I made up my mind to shun a foreign locale and instead headed out for the rustic, rural charm of the Rann in Gujarat.

And I am very proud to say it turned out to be an incredible experience.

Not knowing anything about this part of India, I had to start right from searching the nearest station/airport to Kutch.

Incidentally I interacted with lot of people in my circle to check if they had visited the Rann, and believe me, none of them had. Not even their relatives. Hence the thought: Why did I choose this God forsaken place for my outing this year?

I started interacting with Gujarat Tourism officials who have erected a tent city in the Rann for tourists. After chasing them for two months and getting the same reply, ‘bookings not open yet’, I made up my mind to chuck the idea out. If-not-this-then-what made me try again.

I made one last attempt and came across Mahendra Bheda of Kutch Travels who was very prompt in responding to my query and there I was on December 21, 2013.

All credit goes to Mahendrabhai and his daughter Prachi who made it a very pleasing experience. Mahendrabhai worked out a 3 nights and 4 days package including stay, transportation, sightseeing, food etc. He spent considerable effort working out an itinerary for us smilingly, not even complaining once despite several alterations from our side. 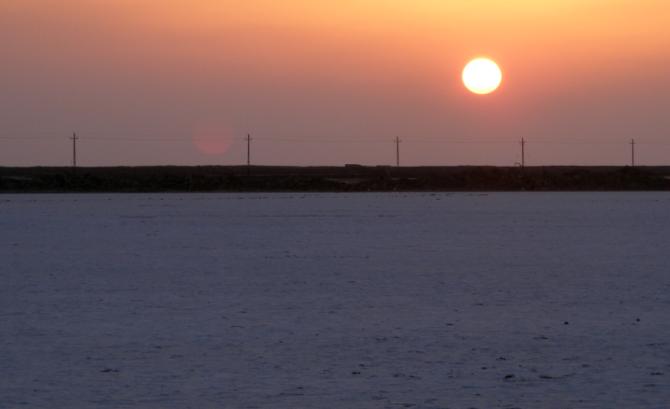 When we reached Bhuj station Mahendrabhai was there with Prachi to receive us.

The excitement was palpable... after a scrumptious Gujarati thali in a posh Bhuj restaurant we set out for our resort in Hoduko village.

It will be a misnomer to call it a resort; it was a Bhunga -- a mud house with all the contraptions that we call modern amenities. The Bhunga was exactly as per our specifications: spacious, airy, well-lit, big sleeping places.

The owner and his family members were really nice and accommodated all our genuine and sometimes not-so-genuine demands -- like a cup of tea at midnight.

The weather was breezy but pleasant; after Mumbai’s sultry weather, it was a great respite. Mornings and nights were excessively cold whereas the day was very pleasant.

Unable to contain our excitement, we headed to the Rann the same evening, a good 20 km ahead in Dhordo village, the last village on Gujarat’s border with Pakistan.

It gave us a good insight into Kutch’s village life, a novelty for the city-bred like us.

I must mention the roads are smooth; villages well electrified and Gujarat Tourism has done a wonderful job creating the right ambience there.

As we entered the Rann, we could see endless white salt, its whiteness and expanse mesmerising us. It looked as if a white bed sheet with moonlight falling on it covered the land.

The weather became colder with the setting sun and breeze stronger. 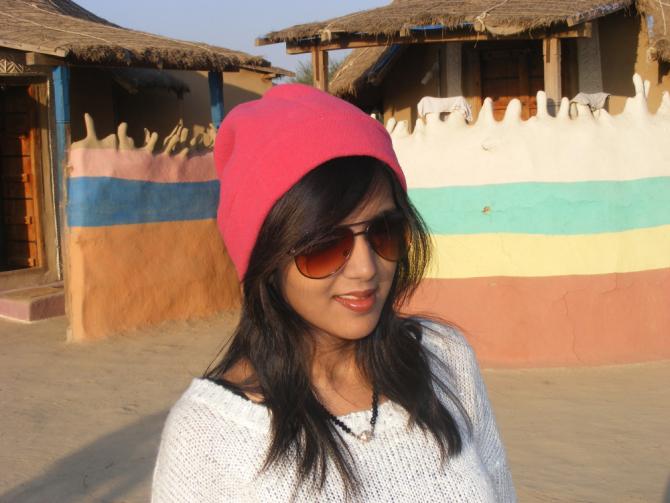 Tanya, my daughter, who was excited about camel rides in the Rann, had to settle for a mule ride due to heavy booking. Once she was back, we got a chance to go for the camel ride. I was so excited to watch the Rann from a height... Incredible!

By the time we returned it had turned quite dark and cold.

Tired and exhausted we walked towards the parking lot with a heavy heart. Five hours spent in the Rann’s empty wilderness felt not satisfying enough.

Later that evening, we drove towards Craft Bazaar erected for tourists selling traditionally embroidered stuff like shawls, kurtas, jholas, clutches, jewellery... mesmerising. I wanted to buy everything but was advised to buy from the villages outside the resort. While at the food court, we saw a parade of camel carts decked up in all finery.

What a sight it was!

When we returned to our Bhungas, hot and delicious Kutchy dinner was ready for us with a bonfire on the side. It was really very cold; eating hot dinner in the open made up for the chill.

Contrary to our expectations, the stay at the Bhungas was really warm. We were ready for the next morning’s adventure...

PS: Our driver Prakash bhai, who tirelessly took us all over the place smilingly, needs a special mention here; more of guide for the tour and friend for life. He drove incessantly and made sure we didn’t miss anything that Mr Bachchan would have wanted us to see in Kutch.