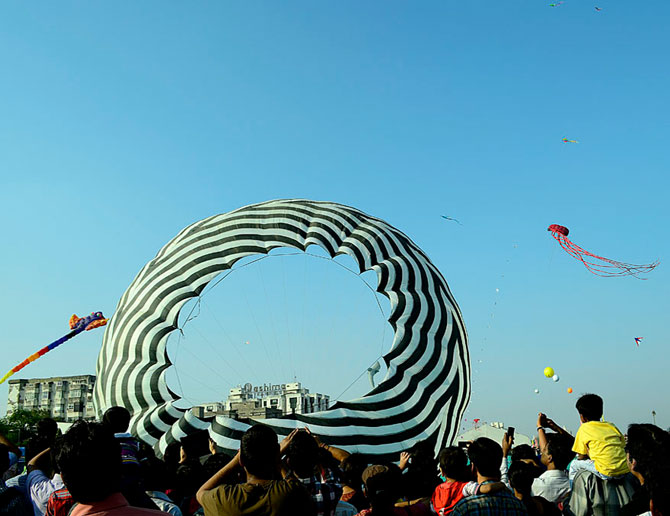 In the months preceding this day, streets and lanes are lined with makeshift shops selling kites of all shapes and sizes.

The day itself is a public holiday as people of all ages and across social classes get together to fly kites, literally.

Nisha Jha visited one such Uttarayan and witness the International Kite Festival that sees participants from scores of countries. This is her diary:

The landlord of the house we are staying in leads us up a dark and narrow stairway, past two floors. The hall we had just passed through on the ground floor was full of old and antique furniture of the kind we would give our eyes for. The walls are an art gallery of beautiful paintings and exquisite artifacts are strewn around everywhere.

We had arrived here in the old part of Ahmedabad the day before, and negotiated narrow and crowded lanes full of shoppers and shops selling their wares for the big day, Makar Sankranti.

With a lot of luck and driving around for a couple of hours, we eventually reached our destination. This morning we had woken up early and had tea with our hosts.

Now, as we near a screen door we hear a noisy drone coming from outside. Our host throws open the door and we step out onto the sunny terrace.

The sight that greets us is absolutely stunning. The sky is teeming with kites of all sizes and colours. Not a single terrace is empty. The atmosphere is wonderfully festive, as families gather on the rooftops to fly -- or fight -- their kites. As the houses are close to each other, one can cross from one terrace to another easily.

People of every age are flying kites, holding the phirki or spool of thread, or helping in other ways like distributing snacks and tea to the 'players'. Laddoos, undhiyu, jalebi and surati jamun are essential to fuel the zeal of the participants, it seems.

These family celebrations are charming. But the real action takes place at the International Kite Festival that is held every year in Ahmedabad on the occasion of Makar Sankranti, as part of the official celebration of Uttarayan. 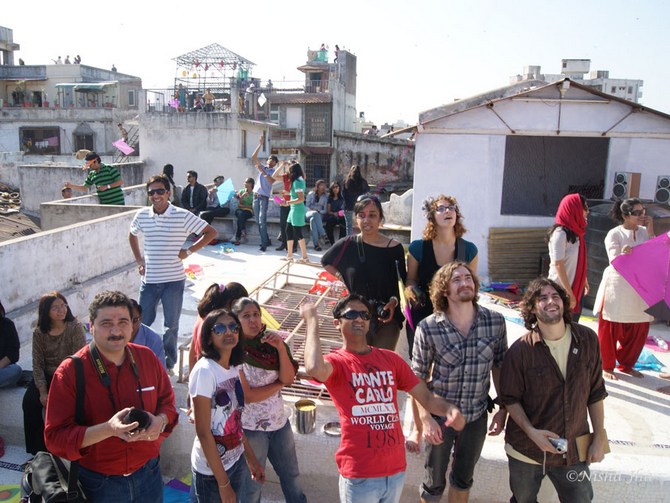 The festival of Uttarayan is a uniquely Gujarati phenomenon. The skies over most cities of the state fill with kites from before dawn until well after dark. Almost all normal activities are shut down and everyone takes to the rooftops and roadways with their neighbours to fly kites.

Uttarayan is a special day in the Hindu calendar, but it is said that the idea of flying kites to celebrate the date arrived with the Muslims from Persia.

It has now transcended all religious boundaries. No matter what your background or beliefs, if you are in Gujarat in January, you will find yourself flying kites with everyone else.

As we near the venue of the international festival we see huge kites of shapes we had never seen before. An octopus is flying alongside a stingray. We join the sea of humanity making its way into the grounds.

One part of the huge grounds is fenced off for the professional kite-flyers and another for the inevitable food stalls.

The enthusiasm is contagious; the energy is electric and the mood, festive! I can see only the top of the heads of people.

We push our way towards the pros. A team of six is trying to launch a huge kite shaped like a parachute with its top cut-off. The team runs with the manja or string, which is more like strong nylon ropes in this case.

As the kite lifts off, there is big roar of applause. But the delight is short-lived as the kite plunges to the ground. More adjustments are needed and the team gets to work.

Another roar from the crowd greets a tiger which takes to the skies and floats up so high it looks like a kitten. A dolphin approaches from another direction, a sailboat and baby elephant are wafted upwards, and a jellyfish is making a beeline for Salman Khan. 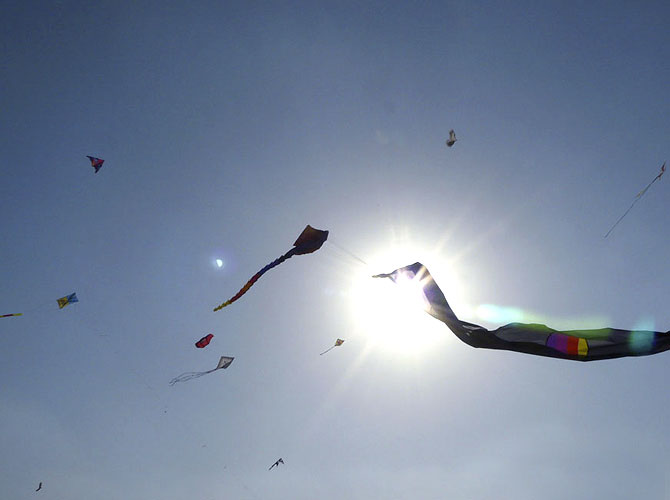 Kids perched on their parents' shoulders shout in delight and their elders and betters enjoy the spectacle equally.

Kite-flyers from other countries have brought their kites too. Japan, Italy, the UK, Canada, Brazil, Indonesia, Australia, the USA, Malaysia, Singapore, France, and China are represented here I am told.

The main competition is to battle one another, cut the rival's string and bring down his kite.

A series of kites attached to one string catches my attention. The kite flyer is outside the enclosure. With deft hands he strings one kite after another. His assistant struggles to keep the kite-series from pulling him up. A child wants to hold the thick string. The kite-flier politely refuses. He says if he gives it to the child, the child would be carried off by the kites.

I thought he was joking, so I ask him how that is possible. He doesn't answer and continues to do his work. I repeat my question several times. Eventually, he holds out the string to me inviting me to have a go.

I take it apprehensively. Then it happens. He lets go his hold and I get a terrific jerk on my hand and am almost lifted a few inches off the ground. Before I let go of the string, he takes control again.

A little later, having wandered around some more, I make my way to the exit when I am suddenly confronted by none other than Priyanka Chopra. Of course, she is just getting ready to take off on a string!

Nisha Jha is one of the very few Indian solo women globe travellers, having travelled to more than 25 countries in five continents. She vouches for voluntourism and nothing excites her more than learning and relishing life's simple little pleasures about new places, people and cultures. She calls her website Le Monde -- A Poetic Travail, where she writes about her sweet and sour experiences around this globe.