We invited you to share with us the love stories of your parents. Mukta Adpaikar wrote in this charming story that made us smile.

My parents' story has all the elements of a good romantic flick. My mother was born and brought up in a conservative, joint, upper caste family. Soft-spoken and reserved by nature, she joined Indian Post after completing her education.

My father had to bear the hardship since his childhood. Befallen by actute financial problems his family  made him quit school in second standard. Even though he started helping the family by running a small shop the zeal for learning still remained. His eldest brother at one point of time even burnt his books to dissuade him from studying.

Around the time he was eighteen years old, a well wisher and a friend Adv Savardekar and the then principal of Govt. Multi Puprpose High school, Madgaon, Goa Fr Dias arranged for continuation of  his education. But he had to pass seventh standard english medium examination before he could start attending 8th standard regular classes. This was an impossible task.

Moved by his commitment and passion for learning  Fr. Dias  himslelf answered the papers and submitted on his behalf.
With the last formal education received a decade ago, that too in marathi medium, directly attending eight standard classes was always going to be an uphill task. Except Hindi and Marathi he failed in all papers in the first quaterly exam.

With sheer hardwork and commitment he stood 3rd in the class in the final examintion. He missed a rank in the merit list of Pune Board (Goa division) by a whisker, but took admission in the science stream. With deteriorating health of his mother and elder brother he was once again forced to discotinue his studies.

But as the providence would have it he accepted a job in Indian Post and got transferred to the same branch where he would meet my mother.

It's a tale of romance all children want to hear -- how their parents met and fell in love! Write in to getahead@rediff.co.in (subject line: 'My parents' love story') along with a photograph of them, if possible and we'll publish the best entries right here. 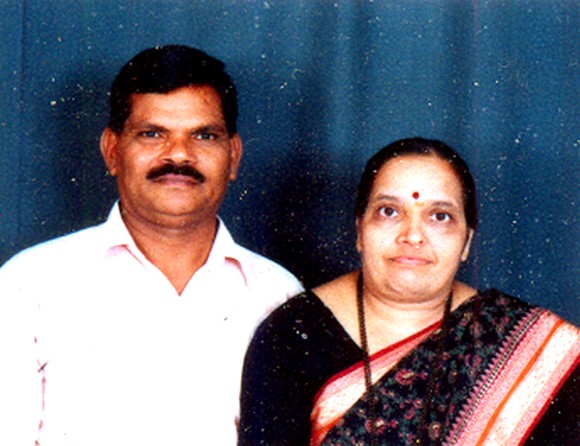 Theirs was not a love at first sight. They gradually got to know each other and became of fond of each other.  After having known her for two years, and notwithstanding caste barriers, my father proposed to her. Even though she did not answer immediately that day she eventually consented. It was 1982 and inter caste marriages were tabboo. Both my parents did not have their fathers alive by then and their elder brothers were the decision makers. Realising that her brother would never agree to the wedding my mother confided in her sister, kept a note behind and  left her house.

Parents of a friend of my father's, Mr V Kulkarni, gave away her hand in the wedding. Without any family support they had taken upon them to start a new chapter in their lives.

They started with a rented one room kitchen. They could only afford one new dress a year. They did not have their first vehicle before seven years after the marriage.  But they stayed firmly together complementing each other's character during this period of struggle.

We (me and my elder brother) haven't seen a single major fight between them in all these years.

We just feel proud and lucky to be their children.

Down the line, with my mother's support, my father completed his graduation in BA, passed LLB, quit Indian Post after 22 years of service and took the risk of practicing law at such later stage. Today he is a successful lawyer and a noted political activist in Goa -- all credit to my mother (who still is a Postal employee).

Looking back in time my mother wonders how she could gather the courage to leave her house and trust in my father. But like  Steve Jobs said 'as with all matters of heart you know when you find it'.

It's a tale of romance all children want to hear -- how their parents met and fell in love! Write in to getahead@rediff.co.in (subject line: 'My parents' love story') along with a photograph of them, if possible and we'll publish the best entries right here.