Sign in  |  Create a Rediffmail account
Rediff.com  » Getahead » Miss America gives it back to haters, and aunties 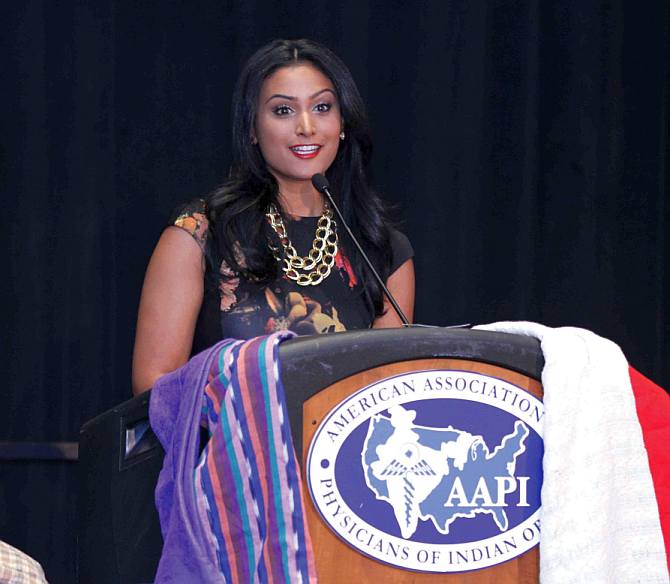 Nina Davuluri proves once again that she is much more than just a pretty face. Aziz Haniffa/Rediff.com reports

Being Indian is such a huge part of me,' said Miss America Nina Davuluri. 'I love Indian movies, I speak Telugu at home, and jokes aren't just as funny in English sometimes.'

She was speaking at the Women's Forum that was part of AAPI's 32nd annual convention held in San Antonio, Texas.

Ever since its introduction a few years ago, the Women's Forum has always been a hit because it had a celebrity -- usually a famous Indian actress -- as a featured speaker, which also attracted scores of men to a discussion that centred around women's empowerment, crashing through glass ceilings and the like.

This year, the audience was larger than usual.

And Davuluri, the first Indian-American Miss America ever, delivered a powerful speech about fighting stereotyping.

'I was actually at another Indian event last month,' she said, 'and I was speaking to an aunty there. And she immediately, when I was talking to her about my career and what I was thinking of doing and why I changed it, started antagonising me in the sense that "You don't want to be a doctor anymore, why not?! That that's the message we want to send to our children." And, it was actually very difficult to swallow. Because it's not to say that because I've chosen a different path that I can't be successful at it, promoting it in a different way and it's not the end of all my dreams and goals.'

'One of the biggest things I've learned this entire year is that assimilation has to happen from both sides -- you simply cannot raise your children in America expecting them to be 100 per cent Indian, 100 per cent Asian, or whatever you see,' Davuluri said. 'It really has to be a healthy balance, and that's not to say that there hasn't been in my household this constant struggle to this day, but it's something that my parents and I are definitely working and figuring out together.'

For beauty pageant haters, she held out a reality check.

Davuluri said she started competing in pageants, beginning with Miss Teen America, for scholarship money to supplement the funds her parents were contributing toward her college education. And through such competitions over the years, before even she won Miss America, she had won $92,000 in scholarship money that helped her complete her undergraduate degree from the University of Michigan debt-free.

'And, I have about $62,000 of that left to pay for my graduate degree, and that will probably pay for my books,' she said. 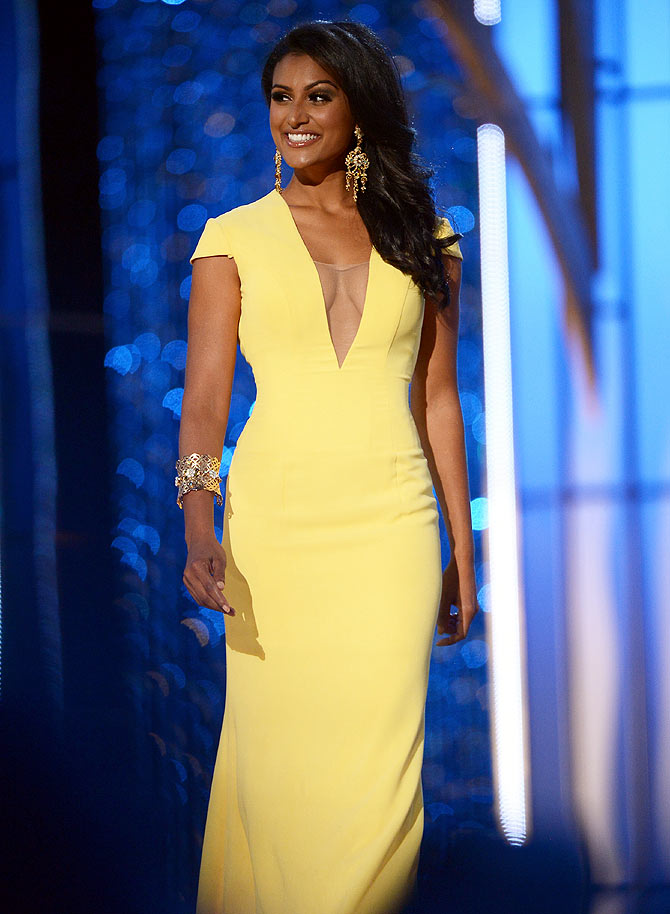 She said service was a pillar of the organisation that runs Miss America and other associated pageants.

'Everyone wants to win Miss America, but no one wants the job of Miss America -- and those are two separate things,' Davuluri said. 'This year, I serve as national goodwill ambassador for Children's Miracle Hospitals, and I also promote STEM (science, technology, engineering, math) education, particularly women in STEM. I had the opportunity to work very closely with the Department of Education, and I am actually meeting with Secretary Arne Duncan, which I am very excited about.'

'And, then I am also promoting my own platform, which is promoting diversity through cultural competency. What many people don't understand is that every contestant in the Miss America organisation is required to have a personal platform -- a cause that they choose to champion for their year of service. So, I didn't wake up as Miss America and decide to start promoting this platform, especially since there were some ignorant comments after I won. It is something I have been promoting essentially my entire life -- officially for three years now. It's something that's very close to my heart.'

'When I started competing in this organisation, it certainly gave me a sense of validity I never had before -- it's something that no one in my family had ever done. It was something that was completely out of the box, it was something I knew I was good at. I was blessed to be given a talent -- public speaking -- which thankfully came easily to me, and I've always been a performer; it's something I've been good at and I felt comfortable doing.'

'For me,' Davuluri said, 'I feel so pressured to go into the medical field and I still feel that pressure and it's really unfortunate that I felt I didn't have a choice growing up.'

To loud laughter from the audience, she said, 'Ever since I was young, it was what I was surrounded by -- and I know I am saying this in front of physicians. But it was something I was surrounded by -- my family, my father, every single person in my family was involved in the health field. And for me, being in this role has really given me a career path that I could have never expected or dreamed of.'

'In as much as a struggle it has been, I've actually decided to apply for my MBA after this year. And that's not to say that medical school won't happen -- it's just that I think this is a better fit for me.'

Again to peals of laughter from the audience, Davuluri said that for all of the kudos and accolades she has received for creating history as the first Indian-American to be crowned Miss America, her sister Meena, a fourth-year medical student, was still the golden girl in the family. 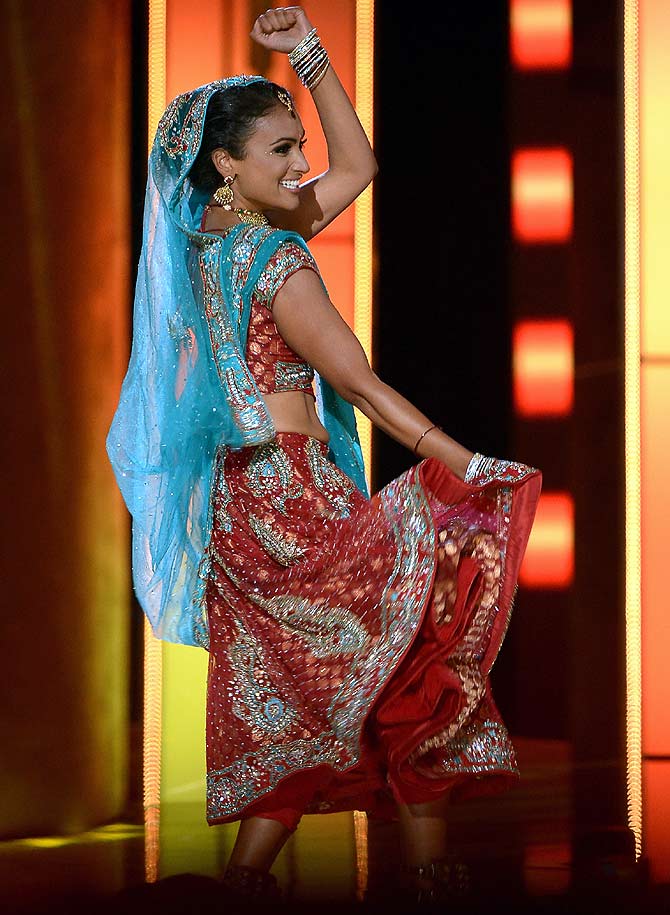 In the question-answer session with the audience, she was asked what the most challenging part of her Miss America journey has been and how she has tried to overcome it.

'Aside from this whole new shift in career change,' she said, 'I would say that definitely the most challenging part is the stereotype of what Miss America is. And, I have experienced a lot of that within the Indian community as well because I think, especially in India, Miss India is viewed as an actress/model and there isn't anything equivalent to the Miss America organisation in India. There isn't a programme that gives away scholarship money, has a talent portion of the competition that really embodies that well-rounded young woman.'

'So, immediately, when people see me they think that I am just here for a picture, and while I am happy to do that, there are so many more layers to what I do on a day to day basis. That's been something I've been trying to constantly say over and over, especially promoting my education.'

'I've worked very hard for my degree -- and I know that goes without saying in the Indian community -- but that's something I really try to put out there as well, especially graduating from the University of Michigan. Another thing also going along with this is that you've really got to trust your instincts.'

When she was competing, she said, 'I can't tell you how many people said to me, "Nina, if you are really serious about this, winning this Miss New York or winning Miss America, change your talent because Bollywood (dance) would never win".'

'One thing that has kept me grounded,' she said, 'is my family and the morals and values we all share in the Indian community.'