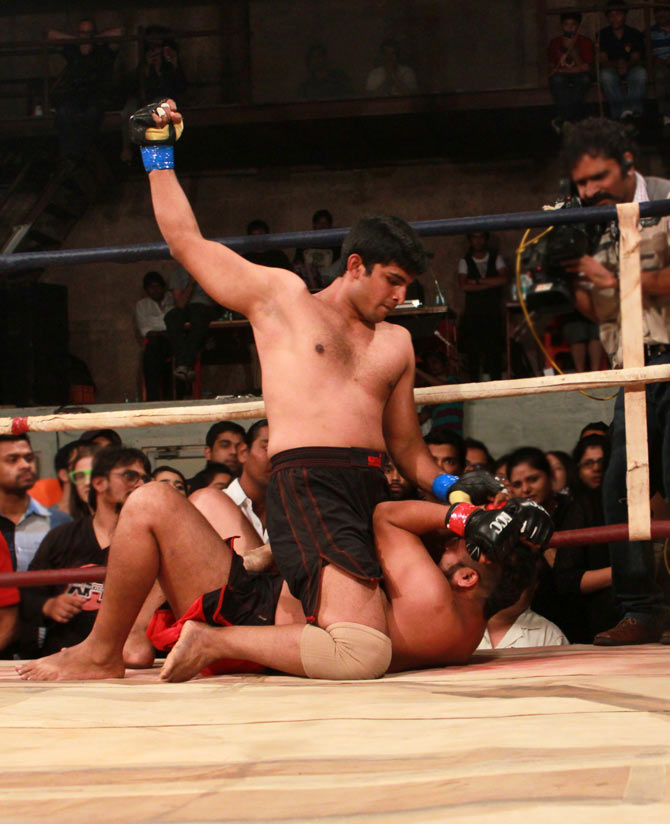 Image: Vishal Balkawade has been travelling from Nashik to Mumbai to participate in the bouts.
Photographs: Abhishek Mande/Rediff.com

You may not have heard of the Full Contact Championship. It's way smaller than Sanjay Dutt and Raj Kundra's Super Fight League, is held way less often and doesn't even have a permanent venue. The bi-annual mixed martial arts event however is edgy and packs adrenalin. Abhishek Mande Bhot takes a ringside view.

In a narrow lane just off the glitzy commercial and business district of Lower Parel in Mumbai, two men are pounding each other as a couple of hundred others watch. Some are egging them on, others are watching with a sense of disbelief.

We are on the sidelines of a boxing ring lit up with studio lights and cooled with powerful air conditioners watching the young men take each other down at Mumbai's Full Contact Championship (FCC).

It is gruesome, true, but you cannot admit the adrenaline rush is something you've probably never experienced.

Jehana Vazifdar is among the many first timers at the venue and confesses she thought there'd be more blood 'because there was an ambulance waiting outside'. Even so, she wasn't disappointed.

Sebastian Moulad, a French national interning in the city couldn't agree more. He followed mixed martial arts (MMA) back in Paris, he said, but he'd never seen a real fight.

"Yes! Never!" he replies when I ask him incredulously. "It is my first time," adding that he was rather surprised at the speed at which fighters were going down. "Some of the fights didn't last more than a round. It was so fast, it's unbelievable."

One of the things, Moulad says he liked about the evening, was that it had 'such an underground feel to it'.

His description isn't entirely far from accurate. That is precisely one of the reasons I've been attending it for the last couple of years myself. There is something edgy about the entire evening -- the lights, the ring, the abandoned look of the studio where it is held, no chairs, a ring babe! It's almost as if you're expecting the police to show up and arrest us!

Prashant Kumar, the man who started this in August 2009 however burst my bubble the very first time I met him. "That's not going to happen," he chuckled. This isn't a rave party!

FCC he says is a government registered association that is sanctioned to conduct fights at an amateur and professional level.

"MMA is one of the fastest growing sports in the world. And I am the only one doing it," he told me some years ago. 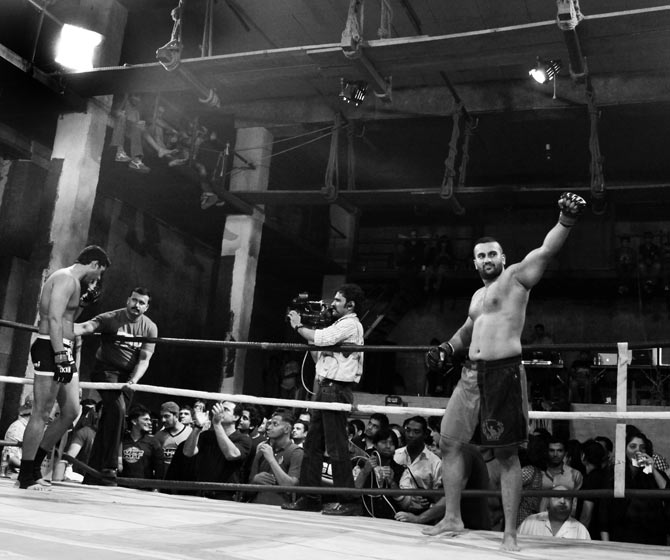 Image: It may not be as large as SFL, but the energy at FCC is undeniable.
Photographs: Abhishek Mande/Rediff.com

Super Fight League currently has a weekend spot on ESPN Star Sports and a three-year contract with YouTube where you can watch the fights from anywhere in the world.

Compared to that, FCC is an insignificant blip on the radar. It doesn't have a permanent venue and hosts fights twice, at best thrice a year.

Yet Kumar has been chipping away at the block, one fight at a time.

Now he's started taking the show around the country. He and his fighters were at the India Bike Week held in Goa in February this year and he has plans to travel to cities in Gujarat and Punjab besides hosting a fight in Pune.

Kumar who has studied law and is an ad filmmaker has been training as a martial artist himself for the last 20 years. He says he's 'well-versed in full contact kickboxing and Muay Thai' and holds a black belt in Taekwondo.

It was in 1994 that he heard about MMA and the idea of setting up a fight network in India got into his head. "The idea was to start a fight night culture like in the west," he says.

However despite Kumar's claim of MMA being the fastest growing sport, there is little or no evidence to suggest that FCC is benefiting from it as it should.

In the years I've been attending it, there haven't been visible changes. The crowds have increased, though not drastically neither have the number of sponsors' banners at the venue. 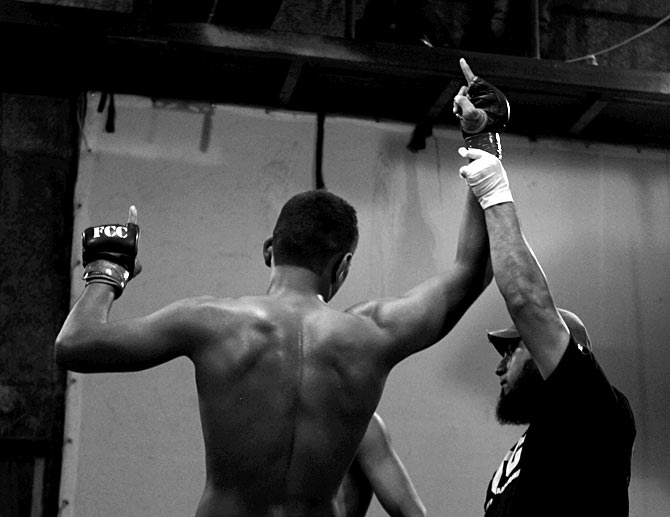 Prashant Kumar admits that they are yet to crack the sponsorship formula but he remains optimistic. He says that the awareness about the sport has increased a fair bit and that he's even managed to get written about in international newspapers such as The Guardian and The New York Times.

"We have already partnered with One Fighting Championship (a Singapore-based MMA event) where two of our fighters participated. So the brand has received a lot of visibility. We're also in talks with a sports channel and there were a couple of potential sponsors attending the last event so we're hoping that the next time we'll have a title and associate sponsor," he says.

If Kumar is worried about the rival SFL, he doesn't show. Over the two years several of his fighters have left him to join the rival league. And why wouldn't they? SFL pays at least a few times more than FCC, it puts them on national television and gives them recognition that Kumar cannot even think of giving right now. Even so, Kumar hasn't gone after them for breach of contract.

He insists that 'those fighters were not among my best. They were on their way out anyway'.

Sour grapes, one might say but there is no doubting his passion for the sport. Till last year, he wasn't even managing to break even, yet he has been at it with single-minded determination. 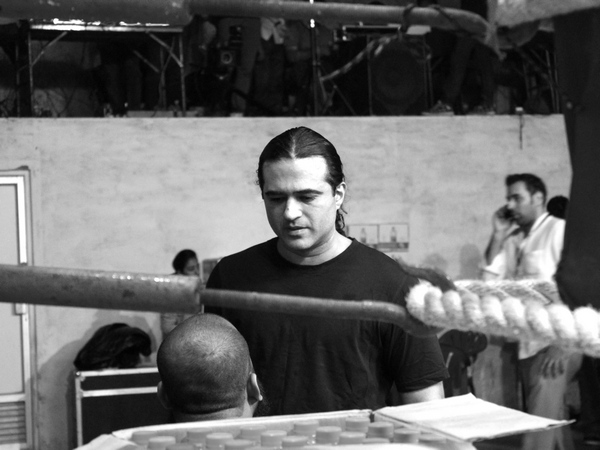 Kumar's quest to set up FCC began in 2006 when he started visiting martial arts clubs in places as far as Haryana, Punjab, Kerala and Manipur among others, besides looking at clubs within Maharashtra, sourcing talent and training them.

Today most of his fighters are from outside Mumbai and in the last two years it is evident that Kumar has been more conscious about who he hires.

Even though most of the fights ended rather too quickly for my comfort this year, they weren't as bad as one of the previous times when a couple of bouts ended in less than a minute and a half.

This year especially, there was a marked difference, and one that caught the attention of Sangeet Singh who was representing Throwdown Malaysia, a UFC (Ultimate Fighting Championship) brand that supplies MMA equipment and is hoping to tie up with FCC.

Singh sounded impressed as he talked about the fighters. "They looked in great shape," he said adding that he was proposing to get some of his fighters from Malaysia to cross train with the boys here. It should be interesting to see how it goes, he said. 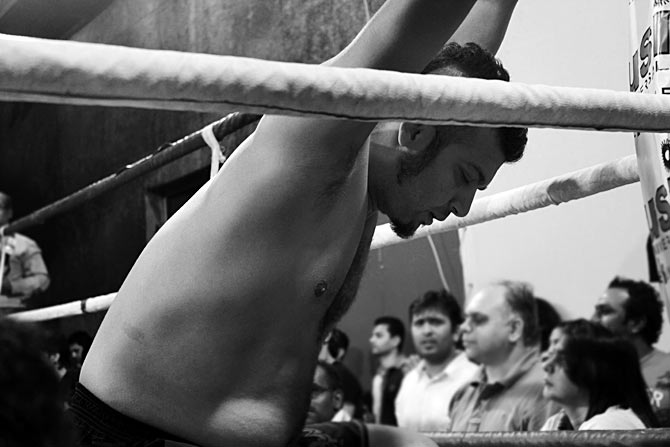 Image: In his other life, Sayyed Mohammen Uvez works in a restaurant in Mumbai.
Photographs: Abhishek Mande/Rediff.com

Most fighters at FCC lead a double life. Some of them like Sayyed Mohammen Uvez who fought the final round of the evening work in restaurants. There have been college students and lawyers and CRPF aspirants who have fought in this ring, some of them hide the fact from their parents.

Vishal Balkawade, a 28-year-old fighter who won the final bout this year, isn't one of them. He's been travelling with his father for all the bouts from Nashik. Balkawade runs a training centre in his hometown and this year he brought three of his students to participate.

Like him, they too are under an exclusive contract with Kumar, figures of which they refuse to discuss.

When he isn't running the centre, Balkawade is a management graduate and is studying law knowing fully well MMA fighters come with a short shelf life. "It is always good to have a back-up," he says.

At least a couple of fighters who spoke to me off the record, confessed to being approached by SFL. "There's a lot of glamour (in it) and it's televised so you are bound to be attracted," one of them told me. "But I've never been very comfortable dealing with them. With Prashant it's like dealing with family."

That is something I suspect Singh would hope to change if he associates with FCC. It almost seems like an enterprise run on mutual backslapping terms or as someone quite aptly put it in Hindi: 'Yaari dosti'.

"FCC is still very underground; it's not commercial. It should be," he says adding, "not in a bad way, of course."

Even as Kumar believes that FCC will soon go places, it will be interesting to see how he takes the corporate onslaught that is bound to hit MMA sooner or later as the country opens up to sports that aren't cricket -- case in point being the Indian Badminton League.

For now though FCC has been running as a bit of a sideshow to major events. Which may be sad in some ways but, if you look on the bright side, isn't all that bad for a sport that few had heard of till some years ago.