Jab We Met: 'A lot can happen over coffee' 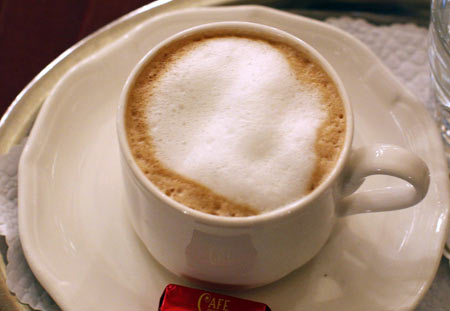 Here, Swati Roplekar tells us how she first met her partner and they eventually fell in love. Illustration by Uttam Ghosh

I joined this company where MD (that's what I and his close friends call him) was working as a Team Leader.

On the day I joined the organisation he was on leave as he was unwell. But I had heard about him through other people in my team.

We met for the first time when he returned to work. Our first meeting was not so impressive. I started disliking him as I felt he was being too bossy (he being the TL).

We were a group of four friends in the same company and MD later joined our group through a common friend. I didn't even like him joining our group.

After work, the entire group would spend some time at a nearby restaurant and have fun. Slowly, as I started talking to him things got better. Thereafter MD and I started chatting over the internet for at least two to three hours every day.

That's when I got to know him better and soon we became the best of friends. This continued for a long period of time. We enjoyed each other's company and we knew almost everything about each other.

We liked each other because both of us were simple at heart and cared for each other a lot.

He also liked the fact that I did not indulge in gossips.

Meanwhile our common friend's marriage got fixed and all of us went to Delhi to attend her marriage.

MD tried to propose his love to me on airplane about 10,000 metres above ground but did not have the courage to say those three words. After returning from the trip, MD proposed to me over the phone. Although I liked him, I rejected his proposal.

I knew that my family would never approve our relationship because we belonged to different states and castes.

However, despite the rejection, MD regularly invited me for a coffee in order to spend some time together. Every time we met at Cafe Coffee Day, he'd always tell me "A lot can happen over coffee".

After six months I accepted his proposal because somewhere deep down I loved him too and couldn't stay away from him (and yeah, MD's coffee magic worked too... :)).

After a few months, we shared our feelings to our respective families. His family approved our relationship while my parents, as expected, didn't approve.

They were against the relation because they felt inter caste marriage would not be successful. They said there was no cultural compatibility between us -- because I'm a maharashtrian and he, a north Indian.

At this juncture, our friends who'd supported us through advised us to take a strong decision. So we decided to continue our relationship and somehow managed to convince my parents.

Gradually the matter was brought up at my home and after a year, I told them that my decision is final. I would marry only him and nobody else.

My family met MD and his parents and now they have approved our relationship and soon we are going to tie the knot. We are happy as we have successfully convinced my family and are now going to spend the rest of our lives together.

Today, I would like to thank MD for being so patient and supportive and also to all our friends who supporting us through our tough times.

'Ours was a long distance relationship'

During my school days I was very well versed with Gautam's name as my school mates referred him as an arrogant person with a lot of female following.

After completing my class 12, I went to Kolkata for my further studies and his name also faded with time.

After a few years I returned to Jamshedpur. But I felt very lonely because I had no friends. Finally I joined Facebook to reconnect with old friends. On September 20, 2011 I received a friend request from Gautam. I accepted his request and started having formal conversations with him.

After a few days Gautam asked me to share my number. I felt hesitant, so he gave me his number and asked me to ring him whenever I felt like talking to him.

He was living in Delhi at that time. After a few days I finally sent him a text message. That entire day and through the night we chatted via sms. Although those were very formal and brief conversations, I gradually felt attracted to this guy.

But I was afraid because I wasn't certain if he had the same attraction towards me.

I didn't even know whether he already had a girlfriend. One fine day I asked him, I was happy and relieved to know that he was single.

That night he asked me whether I had a boyfriend. I said No.

The entire night I had butterflies in my stomach.

The very next day I called him and told him that I did like him a lot.

We exchanged our Yahoo ids and started having video calls.

But it was still a long distance relationship. One day I said him that I wanted to meet him.

After almost two months into the relationship we finally met on December 23, 2011 and it was his birthday too.

Since Jamshedpur was cold and chilly, we decided to meet at my place.

He came to my home and that was how I met him for the first time. It was a strange feeling.

After a lot of conversation the time came when he had to leave and I was pretty unsure whether to hug or kiss him as it was our first date.

After gathering a lot of courage I kissed him.

It was a very special moment. He stayed in Jamshedpur for almost six to seven months and we shared a lot of moments together.

Presently he is away from Jamshedpur but does pay a regular visit.

We have lots of issues between us such as family problems, the long distance etc but still both of us are very positive regarding our relationship.

I don't know whether our families will allow us to get married or not as they are against love marriages.

I still hope that some or the other day we'd break the jinx and prove to be a happy couple. God bless us!