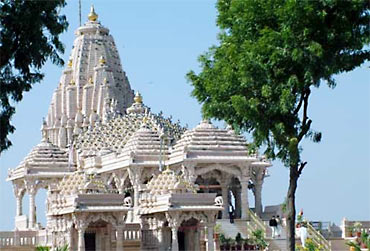 With Julia Roberts' latest movie, much of which has been filmed in India, releasing on August 27, we bring you the second part of our series -- take a look at the most popular religious sites and pilgrimage spots across the country and vote for the one closest to your heart!

Yesterday, we brought you the first part of the Eat, Pray, Love series, asking you to vote for India's best culinary delight.

Today, we bring you some of the most-frequented and revered religious sites from across the states.

Our country boasts of a rich spiritual heritage, one which sees millions of visitors from the four corners of the world flocking daily to pay homage and take in the architecture of the ancients. Tell us which you think is our undisputed diamond in the crown.

At the Shri Pavapuri Tirtha in Bihar

This Jain tirtha, or temple complex, is located in the midst of a loyus-filled lake and it is believed that Lord Mahavir last preached and then attained nirvana here. The foot impressions of the Jain prophet may also be seen here, inside the main tirthanker, the Shri Mahavir Bhagavan Charanapaduka.

The Tirumala Venkateswara Temple near Tirupati in Andhra Pradesh 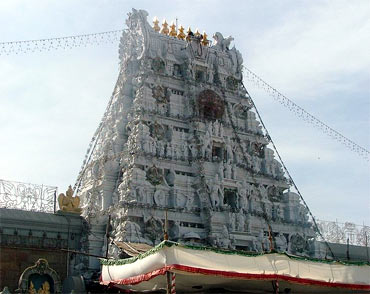 This famous Hindu temple is believed to be the richest and most-visited place of worship in the world, seeing between one and two lakh visitors every day, most of whom get their hair shaved by way of offering to the deity.

Dedicated to Lord Vishnu in the form of Lord Venkateswara, evidence indicates that it dates as far back as 300 AD and the idol within is believed by the pious to have self-manifested. 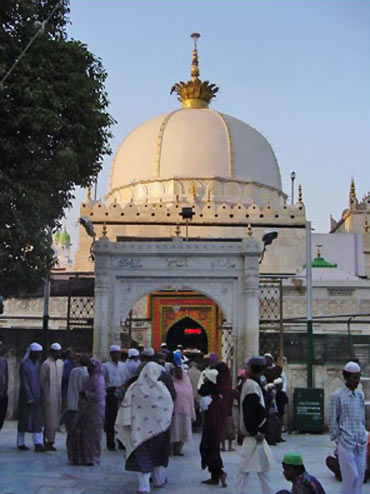 Dedicated to the Sufi saint Hazrat Khwaja Moinuddin Hasan Chishti, this mosque is one of the most-visited pilgrimage spots for Muslims in India. It is believed that the saint first set foot in the country at Ajmer.

The towering facade, the twinkling lights that adorn the structure at night, the courtyards and the imposing dome are only a few of its many attractions. On top of the dargah's gateway are two pairs of naqqars (beating drums), which were presented by Mughal Emperor Akbar. But for the religious-minded, it is the mausoleum that holds the tomb of Moinuddin Chishti which is most important. 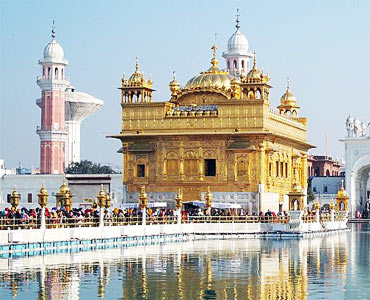 For the Sikh faith, there is no greater shrine than this, one of their oldest and most ornate temples.

Harmandir Sahib means 'House of God' and it contains the holy text of the Sikhs, the Guru Granth Sahib. The external facade of the temple is coated with real gold, hence the title 'The Golden Temple'. The water in the lake surrounding it is also considered holy and within, the temple holds several shrines dedicated to gurus and martyrs.

The four entrances, one on each side, represent a welcome to all, irrespective of creed, colour or gender. Several prominent personalities have also visited the temple, among them Queen Elizabeth II and the Dalai Lama.

The Shrine of Our Lady of Velankanni in Velankanni, Tamil Nadu 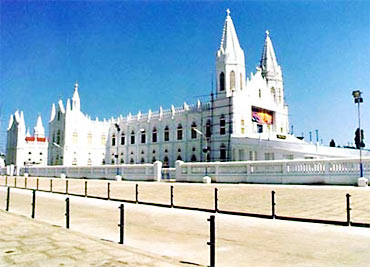 This Roman Catholic Shrine was erected in the mid-16th century as a result of three miracles -- the appearance of Mother Mary and the Child Christ to a shepherd, the curing of a crippled buttermilk vendor and the safe delivery of Portuguese sailors from a storm at sea.

Also known as the 'Lourdes of the East', the church at Velankanni has been constructed in the Gothic style of architecture and is believed to possess healing powers, which is why pilgrims from across the world flock here to be cured. 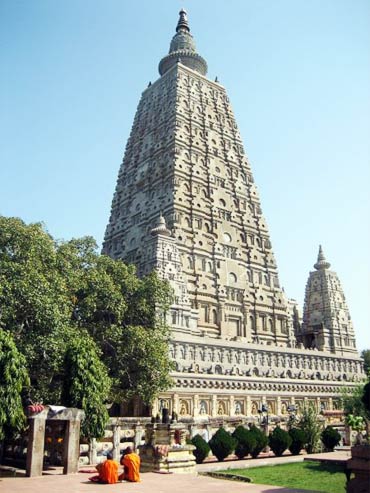 This brick temple, one of the oldest such structures in the country, is located 96 kilometres from Patna and erected upon a site most revered by devout Buddhists, who believe that the Buddha attained enlightenment here. To the right of it is the Bodhi tree, under which he is believed to have sat in meditation.

The great Indian emperor Asoka is believed to have built the original shrine at Bodh Gaya around 250 BC and the current structure dates back to 5 or 6 AD. 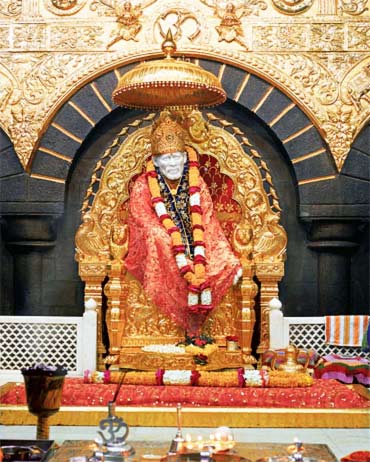 Shirdi sees followers of Sai Baba pour in from every corner of the world to pay their respects to the resting place of the sage -- an average of 20,000 a day and 1,00,000 on festive occasions.

Located in a temple complex, Sai Baba's mausoleum is constructed of pure white marble, with silver columns of intricate design. It also contains several relics from the life of the saint, articles he used in day-to-day life and a stunning statue of him in Italian marble, seated under an umbrella of silver. 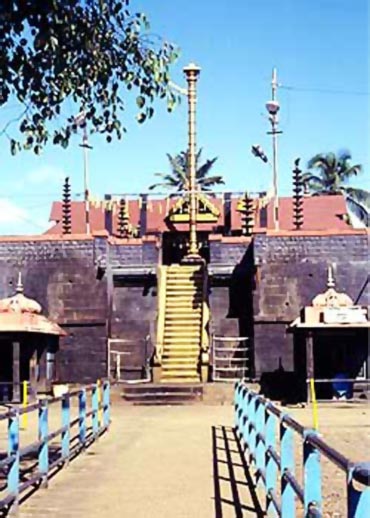 With over 50 million devotees flocking to Sabarimala, tucked into the Western Ghats of Kerala, it is the largest annual pilgrimage spot in the world -- and that's even more remarkable when you consider that it's not easily accessible and involves a lot of ritualistic penance (abstinence from sex, non-vegetarian food, alcohol, smoking, abusive language and cutting of hair) and climbing.

The temple, dedicated to the Hindu god Lord Ayappan, is believed to have been erected at the spot where he meditated after destroying the demoness Mahishi. It sits on a hilltop 914 metres above sea level, and is surrounded by thick woods.

Although it welcomes all devotees irrespective of religion, women between the ages of 10 and 50 are not permitted into the temple, out of respect for Lord Ayappan, who is believed to have been a brahmachari (celibate).

The temples of Tamil Nadu The skyline of our southernmost state is dotted with a wealth of ancient temples that have survived centuries and continue to be worshipped today.

While a mention of all these structures is quite impossible, the most prominent among them are the Chidambaram Temple in the temple town of Chidambaram, the Meenakshi Sundareswara Temple in Madurai and the Brihadeeswara Temple at Thanjavur. All of them are dedicated to the god Shiva

Chidambaram is one of the five holiest Shiva temples, each of which represents a natural element; this one is representational of akasha or ether. Sprawled over 40 acres, the complex is vast, with water bodies within and around and it holds a jewelled deity of of Nataraja. It has seen several renovations through centuries of existence, notably at the hands of a clan of Vishwakarmas and Pallava/Chola royalty.

The Meenakshi Sundareswara, dedicated to both Shiva and his consort Parvati, is a massive complex consisting o several tall Gopurams or towers with two golden ones for the presiding god and goddess. Intricately carved and painted, the architecture will take your breath away and the shrines are many and awe-inspiring, like the huge single-stone Ganesha sculpture and the Thousand Pillar Hall.

At Thanjavur, the Brihadeeswara Temple was the world's first all-granite temple, constructed by the Cholas. The Vimana or temple tower is 66 metres high and a giant statue of the sacred bull, Nandi, carved out of a single stone 16 feet long and 13 feet high stands at the entrance. The architecture is in the Dravida style and the entire complex is surrounded by a moat and fortified with high walls.

Pilgrimage spots by the Ganga 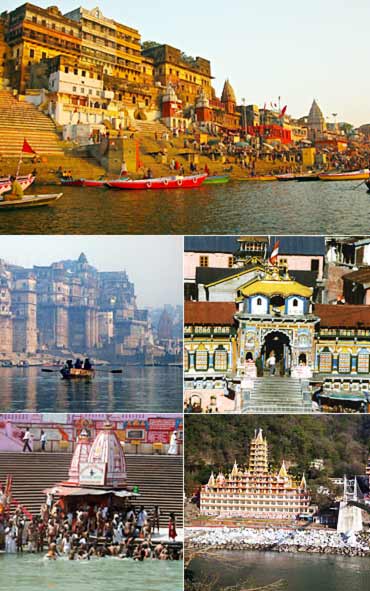 While not all of them hold one specific shrine of supreme importance, India's holy towns of Varanasi, Allahabad, Badrinath, Haridwar and Rishikesh are among the country's most popular pilgrimage spots due to their spiritual history and connection to the holy Ganges river.

Varanasi in Uttar Pradesh holds significance for Hindus, Buddhists and Jains. In fact, Hindus believe that a pilgrimage to the town at least once in a lifetime and the immersion of the ashes of cremated ancestors in te Ganges is a must. The town is believed to have been established by Lord Shiva himself nearly 5,000 years ago and it is certainly one of the oldest existing within the country.

Allahabad, also in Uttar Pradesh, is another sacred city in UP, where legend has it the god Brahma made his first sacrifice after having created the world. Located at the confluence of the holy rivers of both the Ganges and the Yamuna, the devout believe a third, invisible river, the Sarasvati, joins them here. Allahabad is also the site of the Maha Kumbh Mela pilgrimage, which takes place here every 12 years and the Purna Kumbh Mela, which is held only once in 144 years. The melas are attended by millions from across the world.

Like Allahabad, Haridwar in Uttarakhand also hosts the Maha Kumbh Mela once in 12 years. It is the first city that the Ganga passes through upon its entry to the Indo-Gangetic plain. According to Hindu mythology, it was here that the holy bird Garuda accidentally spilled a few drops of Amrit (holy manna that rendered immortality) while carrying it in a pitcher or kumbha (the kumbha is symbolic of the womb, where life begins).

The gateway to the Himalayas, Rishikesh, is located in Dehradun, Uttarakhand. The city flanks the Ganges and is named after one of Lord Vishnu's many forms, Lord Hrishikesh. It is believed that Hrishikesh appeared here under a mango tree to a sage, to reward his austere dedication to the spiritual path.

Move on to the next slide and register your votes.

So which do you think is India's most beautiful place of worship? Cast your vote below and let us know.