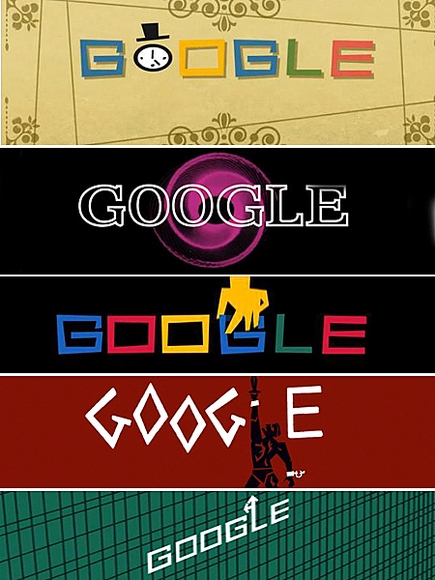 The search engine giant pays a tribute to Saul Bass on what would have been his 93rd birthday.

In the 40 years that he was active, Bass worked for and alongside filmmakers such as Alfred Hitchcock, Stanley Kubrick, Martin Scorsese and Billy Wilder among others.

Perhaps the most well-known title sequence by Saul Bass was for The Man with the Golden Arm in which he used an animated paper cut-out of a heroin addict's arm.

Saul Bass was also the brain behind the iconic poster of the Alfred Hitchcock movie Vertigo, Otto Preminger's Anatomy of a Murder as well as Stanley Kubrick's The Shining.

Born on May 8, 1920 in the Bronx, New York to Eastern European Jewish immigrant parents, Saul Bass studied part time at the Art Students League in Manhatten and began working in Hollywood during the '40s where he did work for film advertisements.

He then collaborated with filmmaker Otto Preminger and designed the poster for his 1954 film Carmen Jones and went on to also produce the movie's title sequence.

It was here that Saul Bass realised that the title sequence could also enhance the viewing experience. He was among the first to understand the potential credit sequences held in a movie.

Saul Bass went on to create revolutionary title credit sequences for numerous films including North by Northwest (1959) and Vertigo (1958) among others.

In the pre-Saul Bass era, opening and closing credit sequences were fairly uninspiring and would often be played on the screen's curtains which would open just about before the first scene of the film.

Using various filmmaking techniques, Saul Bass designed title sequences for over four decades. They ranged from simple cut-out animation as in Anatomy of a Murder to animated mini movies as was the case for the epilogue for Around the World in 80 Days.

The opening sequences of Saul Bass were so strong that they often would serve as prologue to the movies itself and would transit almost effortlessly into the movie's opening scenes.

Saul Bass continued to work with the next generation of filmmakers who had grown up watching his sequences such as James L Brooks and Martin Scorsese.

He created the title sequence for Scorsese's Goodfellas along with his wife Elaine Bass. Among the other Scorsese movies he worked for include Cape Fear (1991), The Age of Innocence (1993) and Casino (1995).

Saul Bass was known equally for creating corporate logos including ones for Quaker Oats, Warner Communications as well as the 'bell' logo of AT&T and its 'globe' logo (that is in use to this day), Continental Airlines' 'jetstream' logo and United Airlines' 'tulip' logo.

Some of the more recent films that paid tribute to Saul Bass in their opening credits include Catch Me If You Can (2002) and X-Men: First Class (2011) and the television series Mad Men.

Google pays tribute to Saul Bass with an animated doodle.