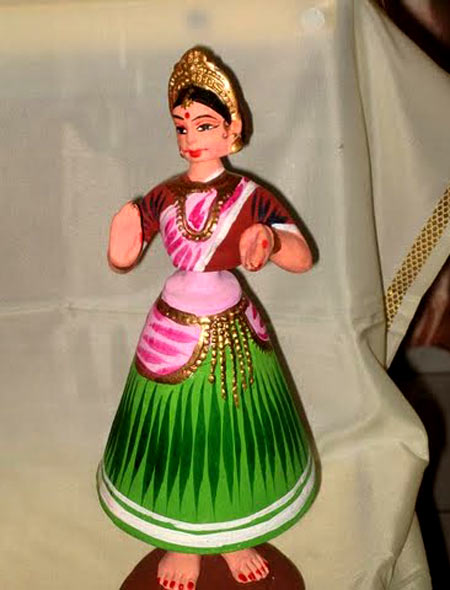 From worshipping golu dolls and sharing Navratri goodies to feeding nine young girls and putting a smile on their faces, each of the nine days of the colourful festival has something new to offer. Find out how Navratri is celebrated in different parts of Southern India.

The grueling exam season is over and with the holidays being just around the corner, there is a lot of excitement in the air.

Moreover, these holidays are extra special as they coincide with the colourful Navratri festival.

Navratri is celebrated for nine nights and ten days during which the nine forms of Shakti or Devi are worshipped. The tenth day, which is considered the most auspicious, is celebrated as Vijayadasami or Dussehra.

In the south, especially in Tamil Nadu, the Navratri Golu is an important part of the celebrations.

The pride and joy that is felt by displaying your colourful dolls, some of which have been in the family for generations, is simply incomparable.

"I have a beautiful 80-year-old Subramanya Swamy doll in my collection," says a proud Revathi from Gandhi Nagar, Adayar, who is already in the midst of a very tight schedule.

"Two weeks ago, I registered for the local Golu competition and much before that I had finalised the theme for the decorations this year. Every year as tradition demands, I hunt for the perfect doll to add to my collection. And this year I have decided to get the entire 'Ashtalakshmi Set'".

Talking about the need to start the planning early she says, "Nowadays, the Golu festival has become extremely competitive and people are becoming more innovative and creative with their ideas. Sometimes themes are planned even three months in advance to give them the time to collect all the required dolls."

Revathi loves all the social activities of the season and enjoys being the host, "I love all the excitement surrounding Navratri, displaying my dolls, getting decked up in beautiful silk saris, preparing sweets, drawing different kolams each day, but my favourite part is inviting my family and friends to my home. Every evening, after five, we light the lamp, pray, offer flowers and naivedyam (prasad) to God, and prepare Thamboolam for the continuous stream of visitors. It is a lot of hard work getting everything ready, but it’s also immensely satisfying." 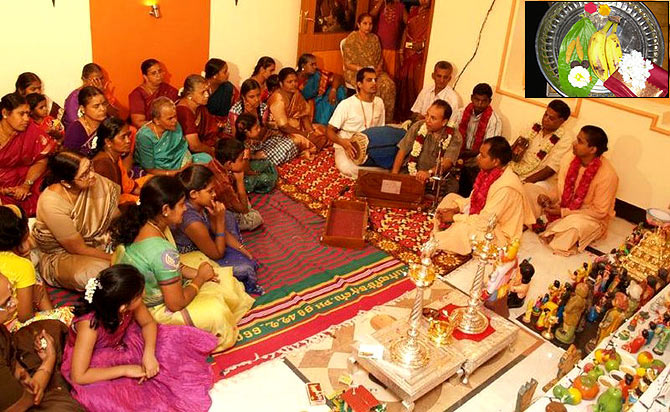 Bhanu Iyer from Chennai sounds excited as she shares details of golu celebrations ahead of Navratri.

Iyer particularly enjoys arranging the thamboolam for her friends and relatives.

"Each day, as part of the thamboolam, the sumangalis who visit our house are gifted a range of accessories after the evening pooja. While bangles, bindis and mirrors are common, some of them also gift expensive sarees to nine sumangalis on one of the days. Women love collecting and sharing these gifts," informs Iyer.

"I started cleaning the house last week. We have also begun to unpack some of the dolls, checking them for any damage, and repainting the ones that need a fresh coat."

Uma, whose routine attire is a salwar kameez wears a madisar during the days of the pooja.

"These days we don't wear the madisar very often, so I usually make an effort to wear it on all festival days. We get a lot of guests, mostly family in the mornings, and friends and colleagues in the evening. We chant the ‘Lalitha sahasranamam', sing bhajans together and distribute prasadam (food offered to god). Though we make a variety of payasam (kheer) and a different sundal each day of the festival, I love the paasi paruppu payasam or the green gram dal payasam."

Click here for the recipe of passi paruppu payasam! 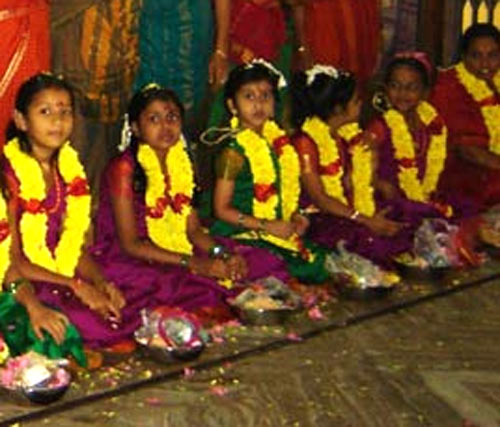 Bhagyalaxmi Kondur who belongs to Hyderabad, Andhra Pradesh is also gearing up for Navratri.

After cleaning up the house, she has to clean the pooja room where the idols are placed.

Kondur gets nostalgic when she remembers celebrating Navratri as a child: "When I was young, all my friends would gather at my house in the evening. We'd play games, sing bhajans and stay awake till midnight. We still have a huge pooja room that is lit up with lights and garlands, but the grandeur has reduced since I moved to Mumbai," she complains.

Through the nine days, the Kondurs observe a fast and offer a different nivedhya to the Goddess.

On the ninth day, Bhagyalaxmi Kondur invites nine young girls to her home and serves them a meal of puris and chana dal. Before they leave, she washes their feet with turmeric water and gifts them colourful bangles, ribbons and fancy accessories.

Throughout Southern India, the ninth day of the Navratri festival is celebrated as Saraswati puja or Ayudha (weapon/machine) puja.

On this day, all tools and machines, including vehicles and all implements that help us earn our livelihood are worshipped.

Rajpal, proprietor of a popular hardware shop in Perambur, who celebrates this festival every year says, “While most festivals are celebrated at home, Ayudha Puja is celebrated at the place of work. We dust, clean, wash, and sometimes even paint all the tools used in the shop, and apply sandalwood paste and vermilion on them. Even our delivery vans and lorries are washed and decorated, and poojas are performed for them. We then distribute sweets to all our workers to thank them for their service and sometimes also burst a few crackers.” 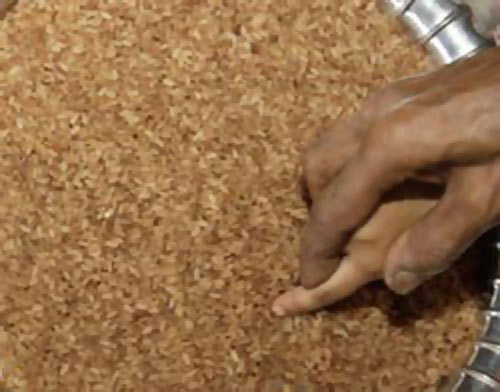 The ritual of ‘Vidyarambham’ or introducing the children to the world of knowledge is another common practice followed on Vijayadasami day.

A Anuradha of Velachery who is a trained Montessori teacher claims that most parents prefer to enroll their children in school during this occasion.

"We usually have a lot of registrations on this day. Children are mostly accompanied by their grandparents and are taught to write their first alphabet by holding their fingers and writing the letters in a plate filled with rice. It is believed that starting anything new, be it education or a business venture on Vijayadasami day ensures success and prosperity. At home, on Saraswathi Puja day, we keep the books, pens, pencils, etc in the prayer room and worship them."

Parvathy Panicker from Shoranur, Kerala also identifies with this custom of Vidyarambham.

On the tenth day, children over four years of age enter the pooja room, pick up a book and read a chapter from it aloud.

Further explaining the rituals, Panicker says, "Not only academics, most people prefer to start their dance, music or drawing classes also on this day. And if you are already learning under a teacher, on Vijayadashami or Vidyarambham day, you are supposed to give gurudakshina to your teacher. Gurudakshina consists of a betal leaf, supari, along with a small token of money and a new piece of clothing -- a dhoti, mundu or saree -- which is offered to the guru." 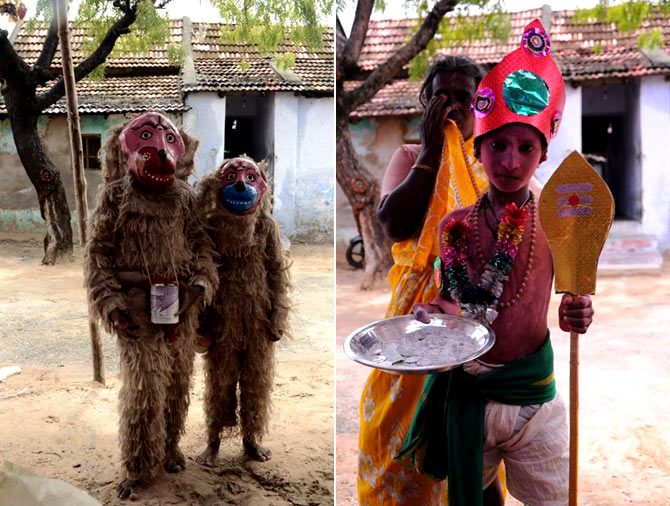 If you are visiting Tamil Nadu during Navratri this year, you should not miss the festivities at the Mutharamman Temple in Kulasekharapatnam.

Situated in a remote coastal village in Thoothukudi, the temple is 300 years old and is famous for its Navratri festival.

Lakhs of devotees from all over the country visit the temple every year.

Thirty-four-year-old Arnagiri has not missed a single year since he was 15.

“As per the tradition of this temple, devotees transform themselves as Goddess Kali, Kings, monkeys, beggars and various other forms of Devi."

The atmosphere in the temple on these days is this simply electrifying, she says.

"I usually dress up as Goddess Kali, and for this, I have to fast for 40 days and follow many other rules."

Once the festival commences, it is a custom to stay at the temple premises and beg for food and money in the local streets.

"We have to sustain on this food alone throughout the festival, at the end of which we donate all the money collected to the temple."

The tenth day is celebrated as Dussehra; it is believed that Devi in the form Annai Parasakthi Lalithambigai destroyed Magisasuran on this day and this victory of good over evil is celebrated at the temple every year.

"For me, the energy and vibration in the temple and the immense faith of the devotees is like a tonic I need to rejuvenate myself with every year,” sums Arnagiri.